A woodpecker at the window

It wasn’t just a discrete little tap, tap, tap on the window frame, it was a very loud and insistent hammering. The first time I heard it early in the morning I thought what an inconsiderate visitor this is. It must be an emergency.

It was a visitor, but not an emergency. Clinging to the outside of the window was one very busy Olive Woodpecker. In the past we’ve had sunbirds at the windows, and wood hoopoes admiring their reflections, even Cape Robins taking a short cut through the house, in the window and out the door, picking up a bite to eat from the cat’s food on the way, but never woodpeckers.

Initially we thought this is nice, nature at our window while we drink our coffee, close up of woodpeckers at work, and stood admiring the beautiful plumage and the way the little head moved so fast it was a blur. The strength and the ability of such a small bird to absorb the shock and unrelenting percussion of the jack hammer beak was amazing to watch.

A male Olive Woodpecker demonstrating how it can cling upright on a relatively smooth tree trunk, while bracing itself with its tail

But how do woodpeckers hold vertically onto a tree, or in this case a window, and avoid banging themselves silly?  As explained at ornithology.com, unlike most birds which have three forward toes and one hind toe, most woodpeckers have two toes in front and two at the back. This toe arrangement, along with stiffened tail feathers, allows the birds to lean back and pound away. In addition, a special muscle and tendon mechanism at the back of the jaw acts as a shock absorber. And if that’s not enough specialized equipment, the bird even has little hairs growing over its nostrils so it doesn’t inhale wood dust.

But after the second day, we thought perhaps we should go and check on what was happening on the outside. The damage to the window frame was quite a surprise. These holes weren’t little beak marks denting the timber, they were deep tearing gouges penetrating the Meranti window frames right through to the other side,  with some even enlarged to almost three centimetres across. There must’ve been five or six holes, all at varying stages of completion. The reason for all this activity was hard to understand. 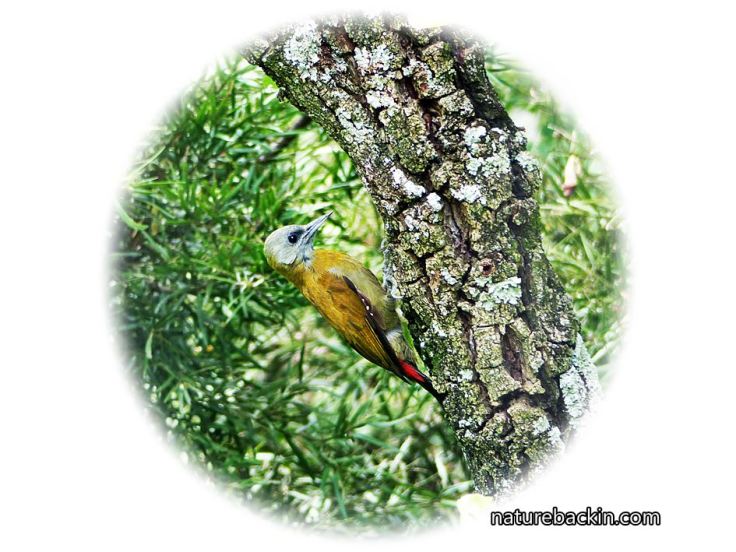 A female Olive Woodpecker looking for food in the lichen and crevices in the bark of a tree. This picture was taken in a suburban garden in the KZN Midlands. In South Africa, Olive Woodpeckers occur in the southernmost and eastern regions of the country

That old tongue twister comes to mind: How much wood would a woodpecker peck if a woodpecker could peck wood? The answer would seem to be an endless amount. On doing a little research it became apparent that there are three reasons for the woodpeckers’ pecking. The first is to catch insects and their larvae living under the bark of trees; then there’s making holes for a nesting cavity; and thirdly, to communicate. It would seem our woodpecker was using our windows to communicate. The message being sent out could either have been about territory or to attract a mate. This form of hammering, called drumming by ornithologists, is usually performed on something with sufficient resonance and echo to make a noise loud enough to carry as far as possible. Such as a window frame.

Olive Woodpeckers are monogamous and are usually found in pairs. The male is easily identified by his red cap

Although woodpecker damage is a very common problem in America and Canada, it doesn’t seem to be as much of a problem here.  Our situation, with damage to window frames seems to have been unusual. So, sadly, we had to persuade our bird to move on to other drumming venues. The holes were filled and quite an elegant solution found as a discourager. Spirals of silver aluminium, turning and flashing in the sun were hung over the windows and the woodpecker can now be heard high in the oak tree beating out its message.

Guest post from the Western Cape: Text by Barb, photos by Carol

Fellow blogger, Barb, shares perspectives on the birds, creatures and plants in her suburb on the inland side of a small coastal town in the Western Cape.

18 thoughts on “A woodpecker at the window” 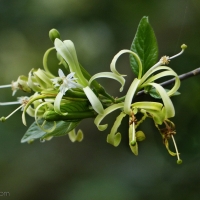 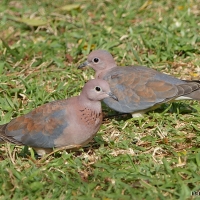