Fairy-tale fungi: The magic of mushrooms

Not all fungi produce mushrooms, but for those that do, the mushroom is akin to a flower or fruit in a plant. This small mushroom is known as Fairies Bonnets and it lives on decaying wood.

Interestingly, although the study of fungi falls under botany, fungi are considered to be more akin to animals than plants, although they are classed as neither. Most fungi we never see, although they play an important role in decomposing organic matter, and in the recycling and exchange of nutrients. Usually we are only aware of fungi when they “bloom” or “fruit”, in the form of mushrooms or mould.

I noticed these small white mushrooms the other day when they appeared in a large colony on a decaying tree stump in our garden. The mushrooms bloom from filament-like strands or threads (known as mycelium) that grow in the wood.

This mushroom, Coprinellus disseminatus, is one of the species of fungi that derives its nutrients from decaying wood, and the mushrooms are usually found on or near the base of dead tree stumps or on decaying logs or tree roots.

These mushrooms are tiny with the largest caps being no more than 2 centimetres across.  This species does not produce a black inky liquid when the spores mature, unlike other mushrooms in this family, which is why they are known as inky caps. However, another common name for Fairies Bonnets is Fairy Inkcap. 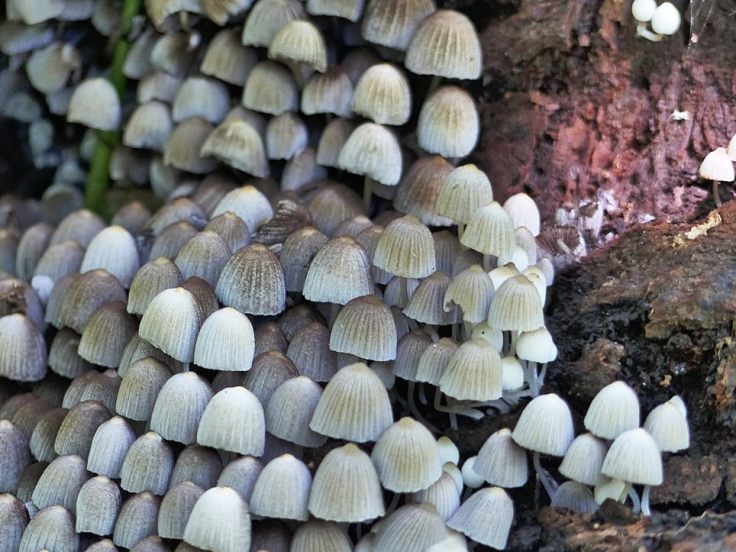 They are very delicate and disintegrate when touched. Initially white, the mushrooms darken to a greyish brown.

The mushrooms lasts only a few days and then they blacken and shrivel, disseminating spores that can be likened to pollen or seeds. Apparently, these mushrooms are edible, but they are so fragile and insubstantial that they are not worth harvesting.

The Fairies Bonnets mushrooms appear in dense clusters in surprisingly large numbers. Because of this characteristic of forming large congregations and because of its fragility, yet another common name is Trooping Crumble-cap.

Coprinellus disseminatus, to use its scientific name, is widespread not only in South Africa;  it is a cosmopolitan species found on all continents.

The website Urban Mushrooms encourages mushroom-friendly attitudes in urban gardens, parks and green areas.  I hope that more gardeners increasingly appreciate finding mushrooms and other fungi in the garden, and rather than trying to eradicate them, provide appropriate habitats, including leaving some areas undisturbed and leaving wood to decay.

Mushrooms and other fungi are fascinating organisms, and as in the case of the Fairies Bonnets, many have seemingly magical properties, quite apart from the fact that some mushrooms contain psychedelic compounds.

8 thoughts on “Fairy-tale fungi: The magic of mushrooms”