Monkey mom snatches a second baby: A photo essay on how the story unfolds in my suburban garden

This post is in the form of a photo essay documenting what happened after a vervet monkey mother, nursing a baby of her own, suddenly took a smaller baby from another mother.

Although it is common for juvenile and female monkeys to take an interest in infant monkeys and to want to touch and even hold the infants, this is the only time I have seen a monkey with her own small baby take another baby and without permission. This may be unusual or rare behaviour, and it is rare to capture it on camera in a suburban garden.

This encounter took place in early summer in the middle of the day. A monkey mom was keeping her baby close but letting it play with a plant. I sat in one place some distance away, and although aware of me, they seemed unflustered by my presence or even when eventually I slowly lifted my camera.

The mother spent some time self-grooming and cuddling and grooming her baby.

An adult male came and sat next to them but was ignored by the mother who carried on grooming. But as you can see in this picture below, the baby was watching what turned out to be another monkey (at the time unnoticed both by the mother and by me) that was approaching.

Next thing, an adult female monkey nursing a slightly larger baby, snatched the baby away from its mother. The baby opened its mouth in alarm and its mother looked up too late from her self-grooming to react. The male next to her watched but took no part in the interaction. 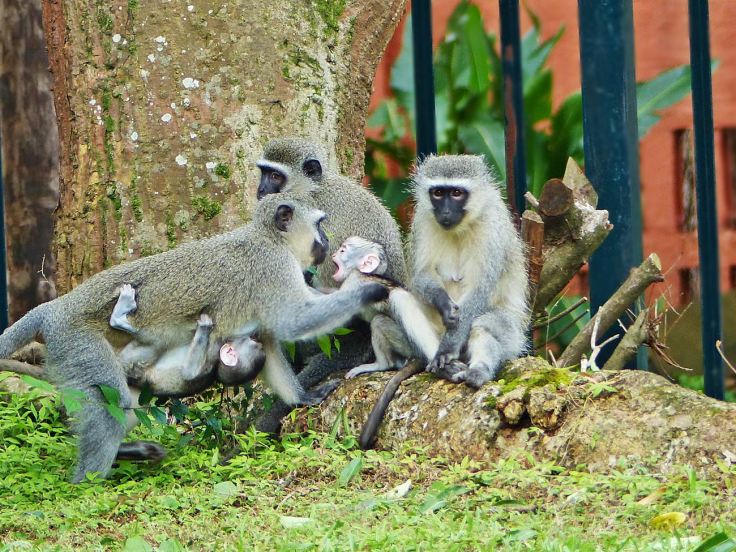 The snatcher tucked the second baby underneath her, and then holding both babies she sat down next to the astonished mother who then moved around to see her baby being firmly held on top of the snatcher’s own baby. All this happened without a sound.

The mom then reached in slowly and tried to retrieve her baby but the snatcher moved away, carrying both babies. The mom followed and sat next to the snatcher and quietly and slowly made several attempts to take her baby back. The snatcher quietly elbowed her off or pushed her away.

The mom then decided to change tactics. She moved around and sat behind the snatcher who loosened her grip on the baby while the baby looked around. Suddenly the mom made her moved and reached around and took her baby back. This time the snatcher put up no resistance.

The mom with her baby then moved back behind the snatcher and the two mothers sat quietly, each holding a baby.

The situation became more relaxed. And with the tension between them reduced, they seemed to become more aware of me as I sat and watched.

The snatcher then moved away with her baby slung underneath her. The mom and her baby cuddled together, seemingly relieved to be reunited and left alone.

The mom then took her baby up into a nearby tree and sat holding her baby in this safer place. The entire silent encounter lasted only four minutes and there were no signs of any real aggression.

It is possible that the snatcher just wanted a chance to cuddle a baby slightly younger than her own, or maybe she wanted to assert her dominance over the other mother, and then decided to give in to her quiet and calm persistence and so allowed her to take her baby back. Of course it is also possible that my presence altered the course of events. ★

For information on vervet monkeys from three monkey rescue and rehabilitation organisations in South Africa that provide advice regarding human monkey interactions, click here and here  and here.

9 thoughts on “Monkey mom snatches a second baby: A photo essay on how the story unfolds in my suburban garden”