Village Weavers: Summertime when the living is busy 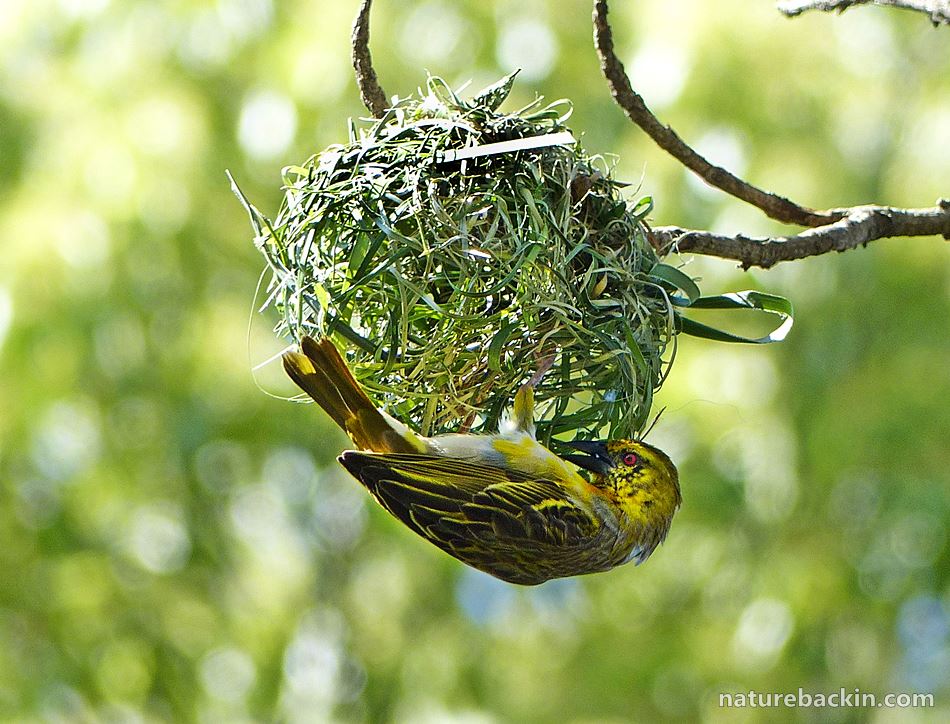 Nest building in the fever trees in our garden has been feverish. After what seemed like some practice runs building nests next to the palm tree used for nesting material, the Village Weavers abandoned these first efforts. They then congregated noisily each day to build nests and engage in flamboyant displays high up in the branches of the fever trees.

Watching them on and off, I found their activities somewhat confusing, but after doing a little reading I confirmed that, yes, it is the males that construct and weave the nests, but some males may start doing that before they acquire their summer breeding colours. Perhaps that explains why it appeared as if females where nest-building too? 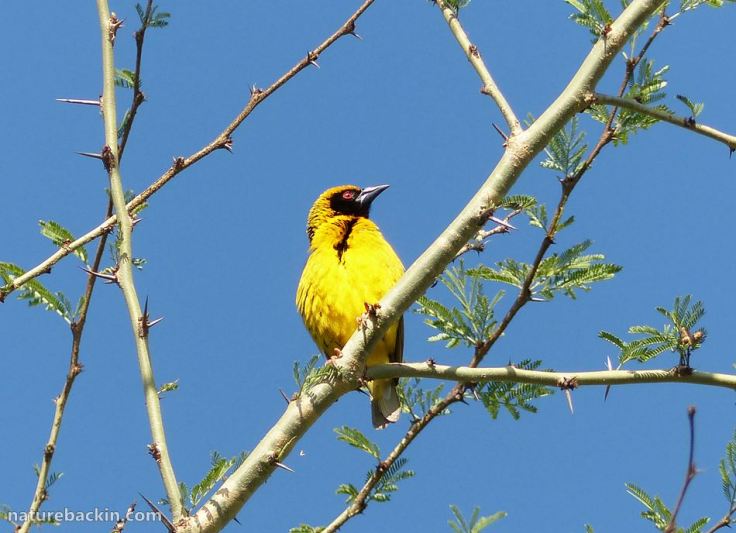 An adult male Village Weaver in his full breeding colours. When not breeding the yellow fades and he loses the black face and throat, and his colouring then resembles that of the female

These two birds appear to be males in the process of acquiring their breeding colours. The black patch on the face is becoming apparent, and feathers are brightening to yellow 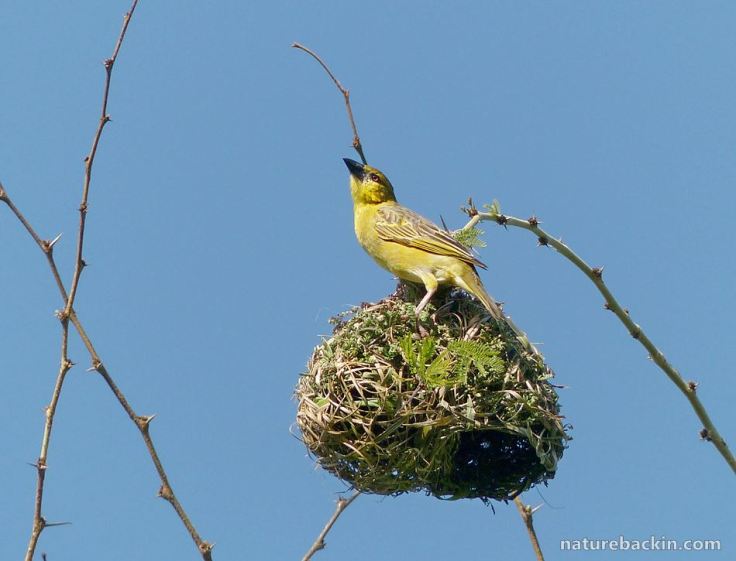 It is hard to distinguish between female Village Weavers and juvenile or non-breeding males. I took this to be a female inspecting the nest, even though the bill appears to be darker than it should be – according to many sources. As the colouring of both males and females seems to be quite variable, I can’t be absolutely certain that this is a female

Village Weavers nest in colonies, often with many nests in the same tree. As the name implies, they often nest in proximity to human habitation. The males build the nests, and defend the small ‘territory’ around the nest as they build. They may build up to five nests in a season, attracting a female to each nest. 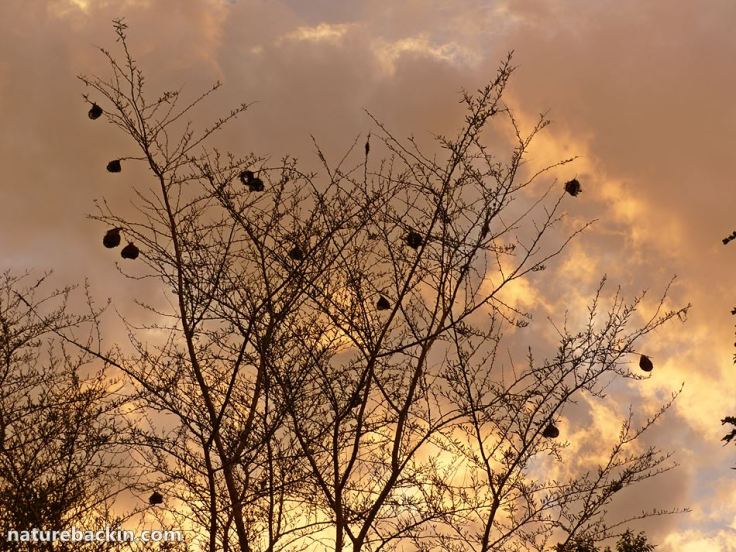 Building nests is an arduous and time-consuming process. Not only is securing and weaving the nest difficult, requiring a fair degree of athletic flexibility and concentration, it also requires frequent flights back and forth to gather weaving material. In our garden, the Wild Date Palm (Phoenix reclinata) is heavily used by the weavers tearing off strips of palm leaf to use for their nests. 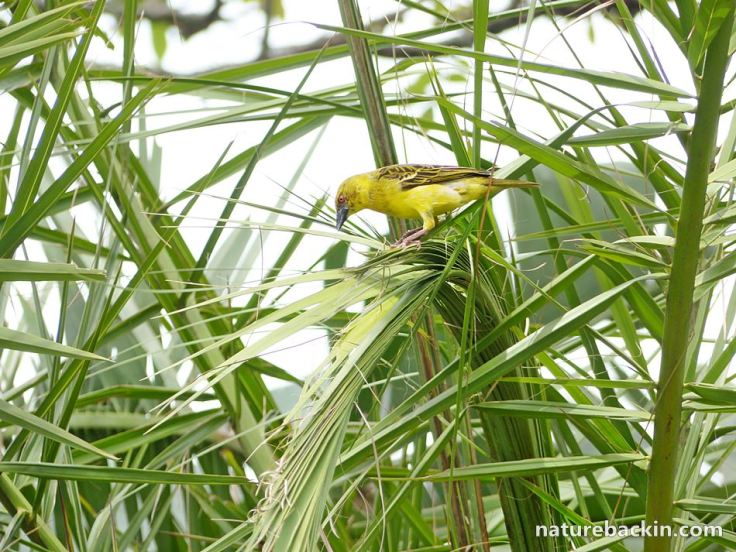 By the end of the nest-building season, our palm tree starts looking rather frayed, but the old leaves are soon replaced by new growth 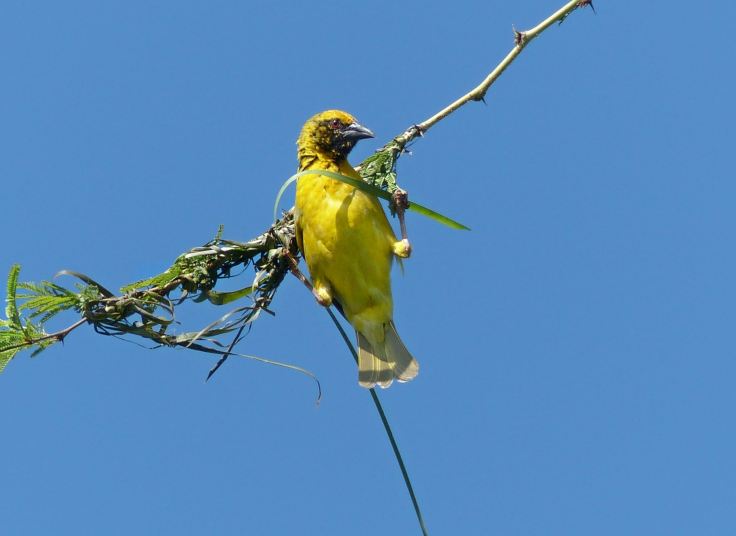 Starting a nest appears to be quite tricky 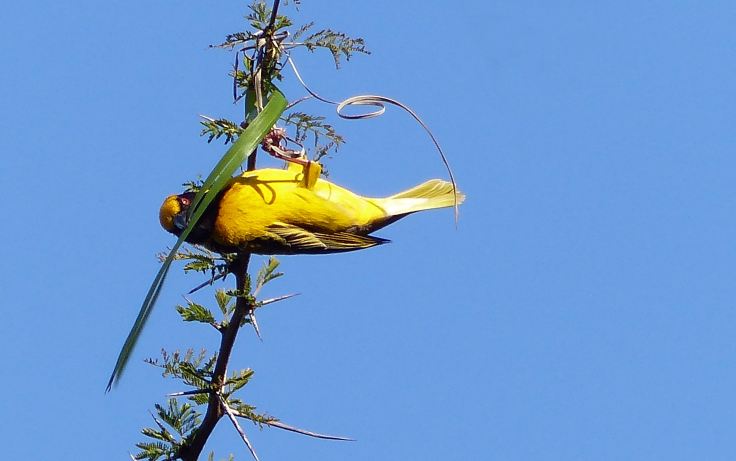 It requires dexterity and persistence 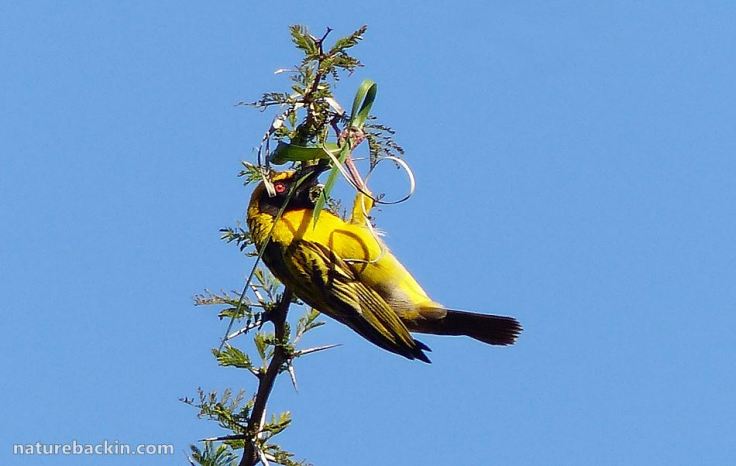 The bill and the feet are used in the process of securing strips of leaf to anchor them to the branch, and when weaving and knotting the leaves to form the nest 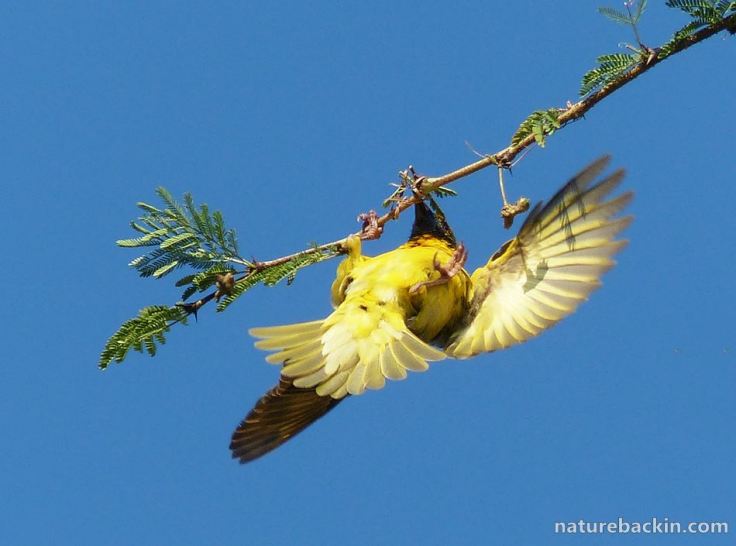 Even in the early stages of making a nest, building it is interrupted by vigorous bouts of displaying – usually dangling upside down with tail spread and fluttering the wings, all the while with most birds in the colony making their characteristic ‘swizzling’ song 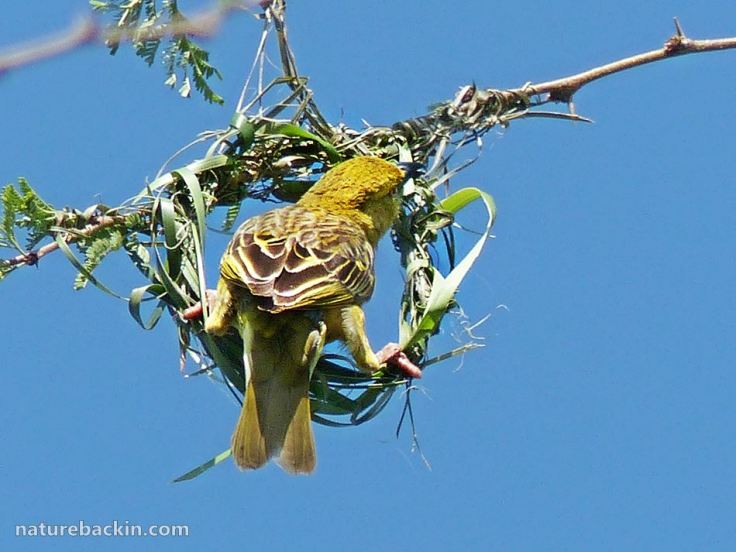 Once the beginnings of the nest are securely anchored, the circular diameter of the nest is shaped 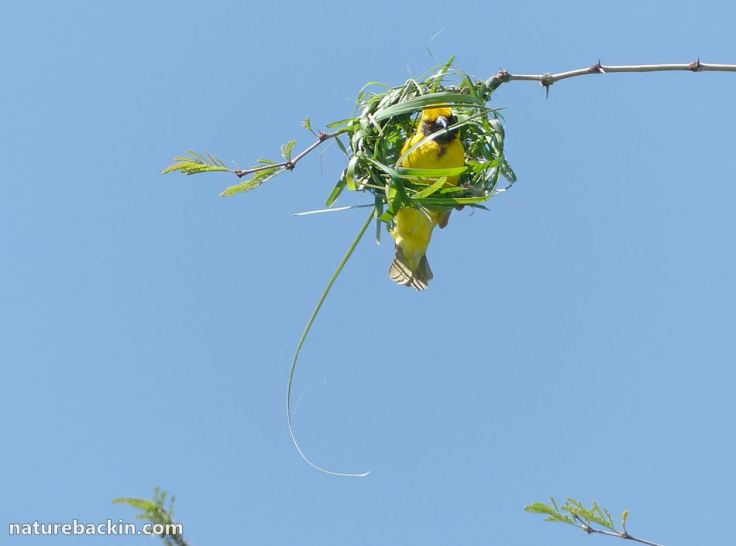 Once the ring is made, the nest chamber is made. The split ends of leaves are woven in different directions. Each nest takes 9 to 15 hours to build 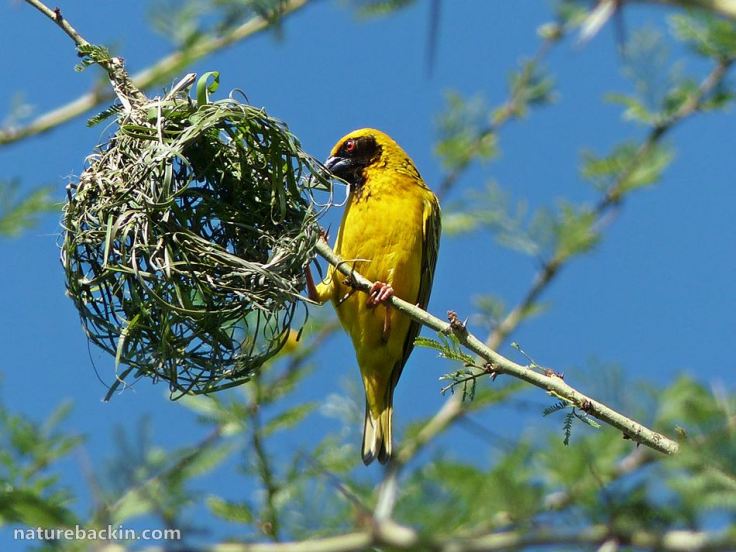 This nest is taking shape

Studies have shown that the nest walls are woven from hundreds of strips of leaf material (average 384 leaves) with each piece being 250 to 300 mm long. The roof is thatched and lined with many more leaves forming a roof and ceiling. The entrance to the nest is always underneath. Sometimes a very short spout is added to the entrance. 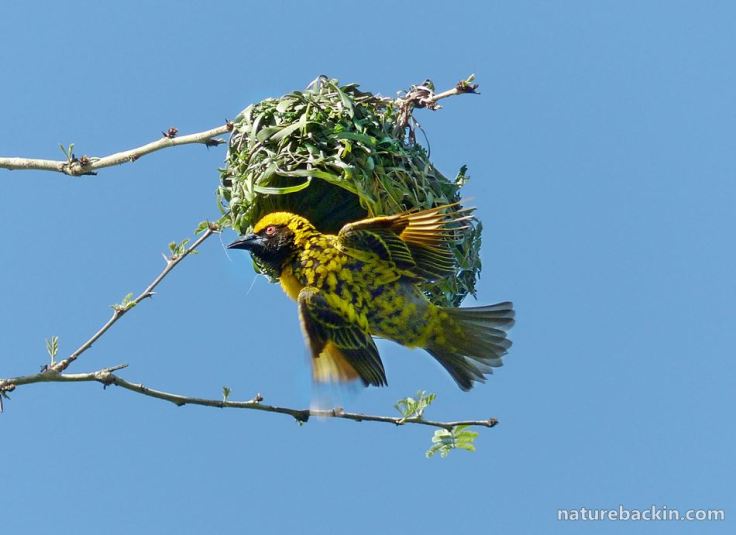 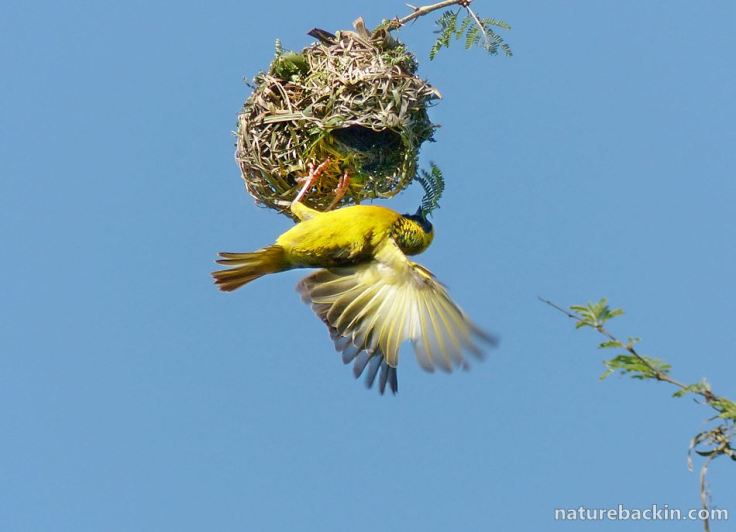 Displaying upside down under the nest while swinging the body from side to side and fluttering the wings is a favourite form of display. This male weaver is displaying and calling while he has a bill full of fever tree leaves that he is using to line the roof 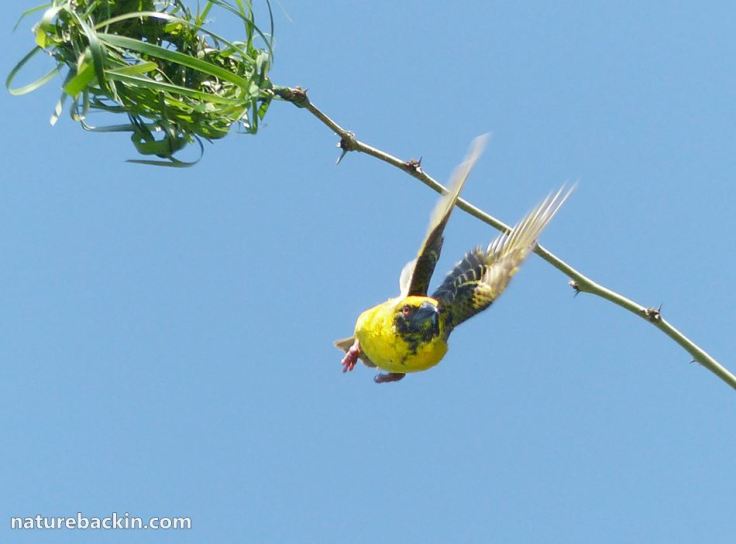 Displaying seems to be infectious. When one bird starts then all the others building their nests seem to join in. Displaying may also coincide with a female arriving to inspect a nest. Sometimes altercations break out. One morning a particularly prolonged scrap broke out between a male in full breeding plumage and one that did not yet have his full colours. 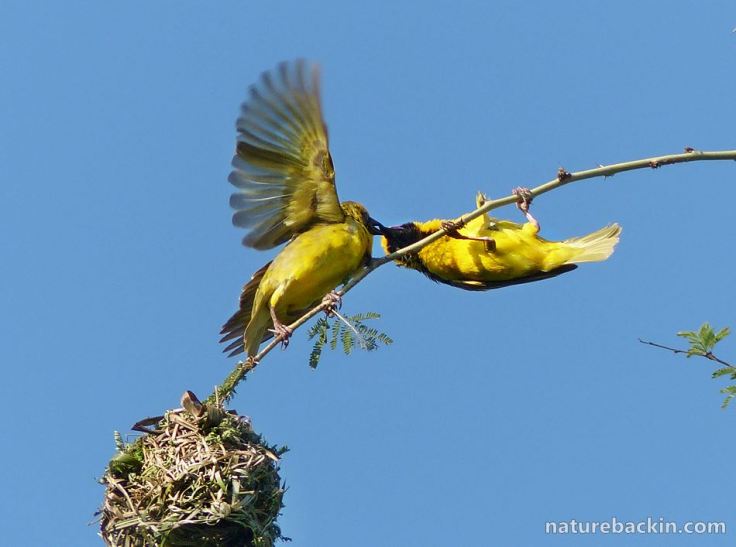 This confrontation with two birds challenging each other near a nest continued for well over two minutes. The only contact they made was pecking at each other’s bills from time to time 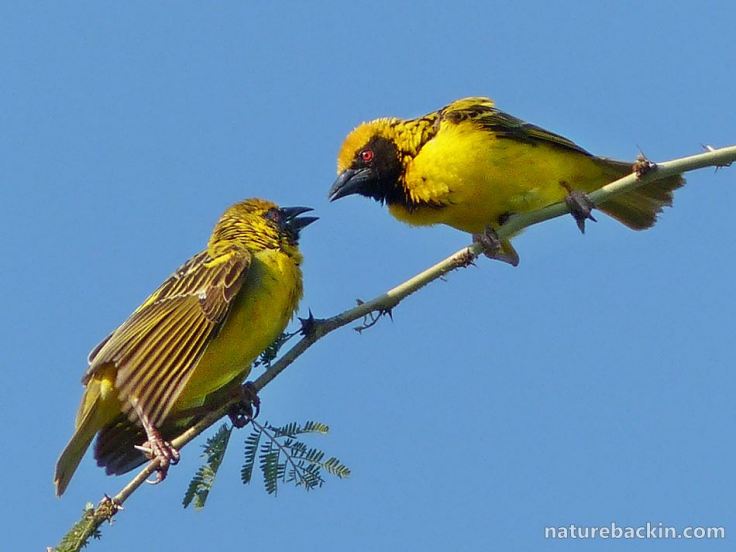 Much of the challenge consisted of facing-off while ‘swizzling’ loudly 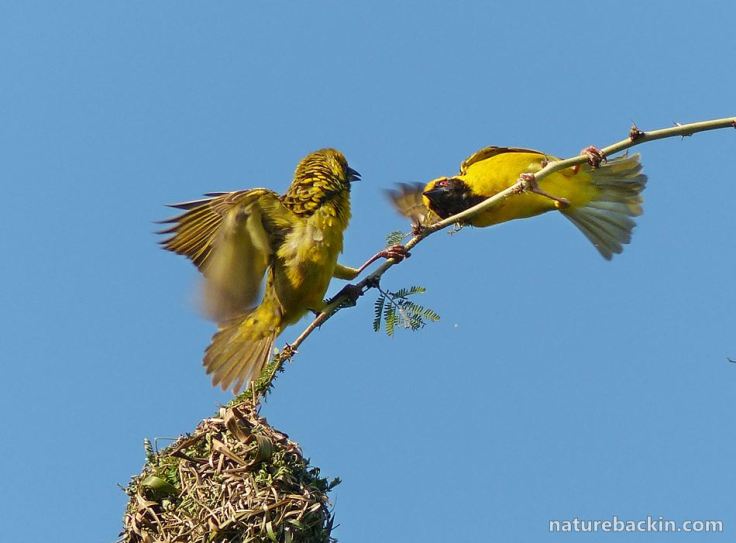 Once the confrontation was over they resumed building their nests

The female inspects the nest before it is finished, and it is thought that she selects a nest on the basis of its strength. Once she has accepted the nest, the male may add a short entrance tunnel, and the female lines the cup of the nest with grass heads, small leaves and feathers. Sometimes rejected nests are demolished before the male starts working on a replacement.

The incubation period for eggs, which are incubated by the female, is about 12 days, and nestlings are in the nest for about 17 days. The young are fed mostly by the female. Strangely, in our garden, despite all the activity, we have never seen weavers using the completed nests nor raising young. This year, after about two weeks of nest building in other trees and then about another two weeks of great activity in the fever trees, the birds have moved on, and the nests appear to be deserted. Although nests are built every year we have never noticed them being used. It is possible that they are used, but if so, so discreetly we never see it. 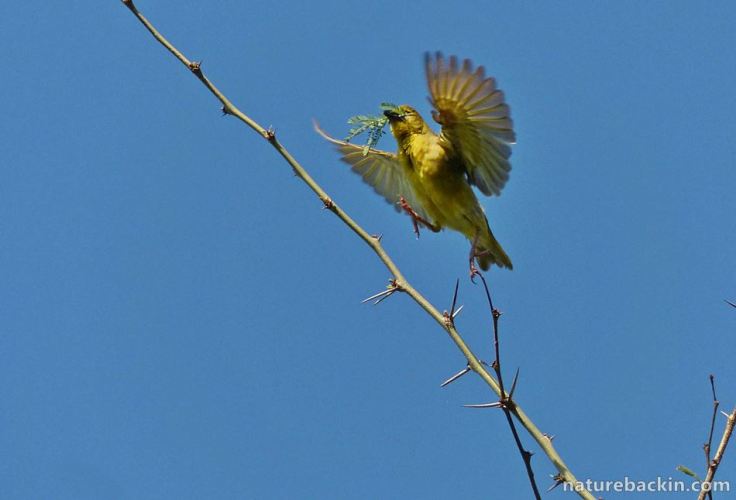 This weaver, likely a female, is carrying a sprig of leaves to the nest 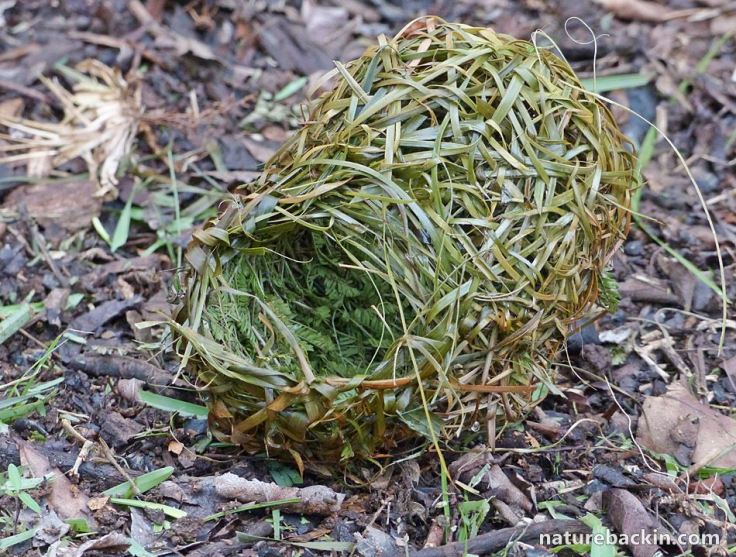 This nest was discarded and fell to the ground beneath the nesting tree. It is upside down, and that the roof is carefully lined with sprigs of leaves from the fever trees can be seen clearly 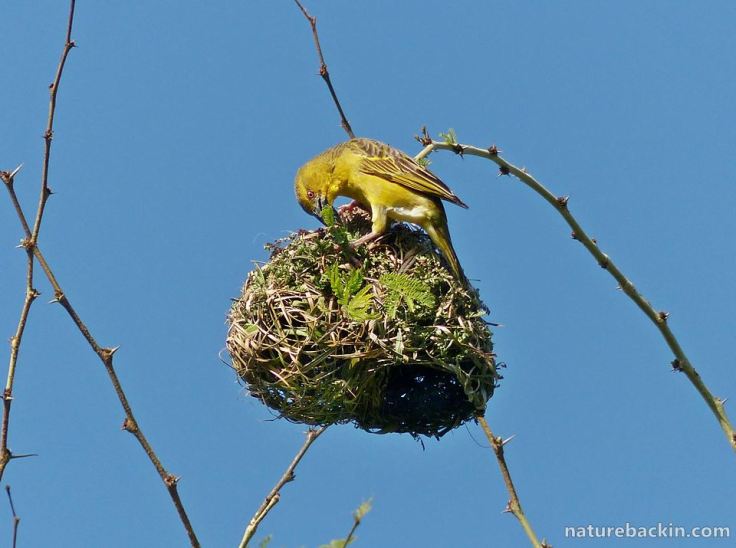 Finishing touches to the roof 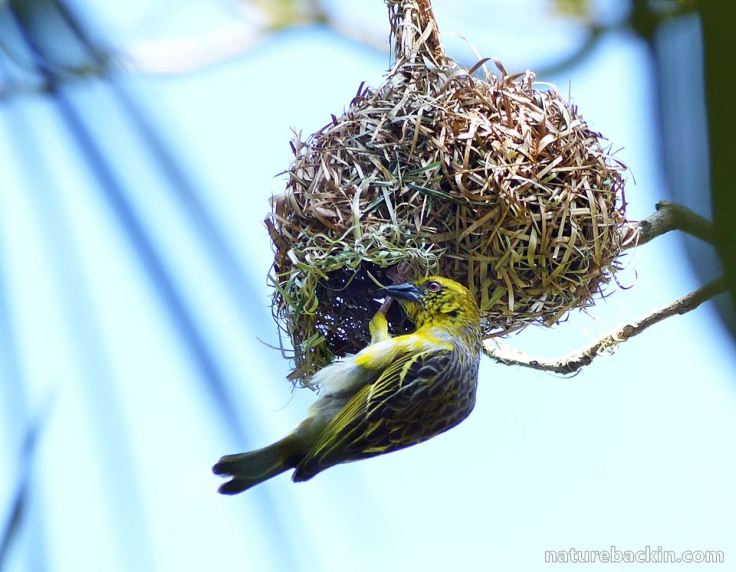 Neatening up the entrance. This nest was built low down near the palm tree. It was soon abandoned and not used despite being completed 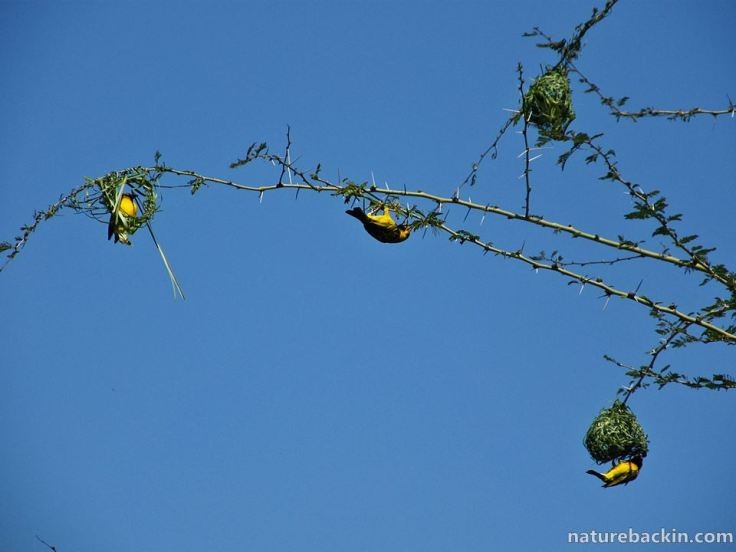 After all the activity and hard work, it is strange that the weavers moved on so soon. The garden is strangely quiet without their incessant swizzling song 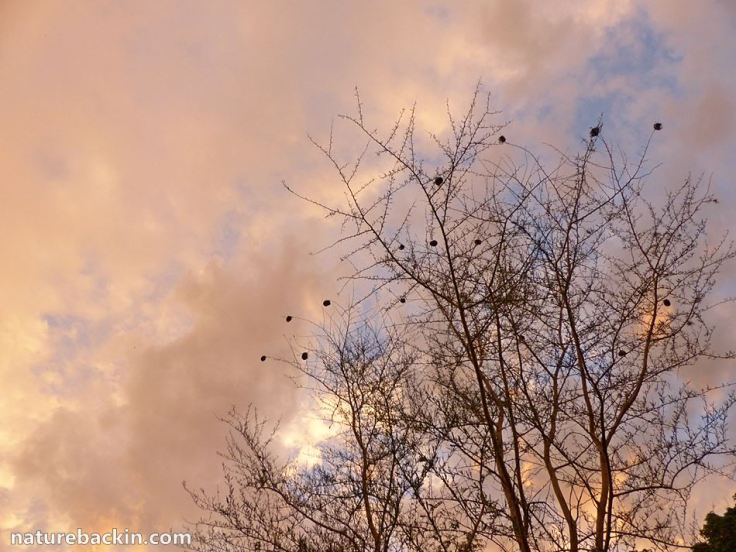 39 thoughts on “Village Weavers: Summertime when the living is busy” 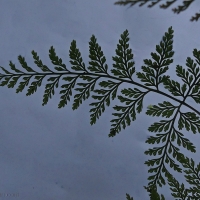 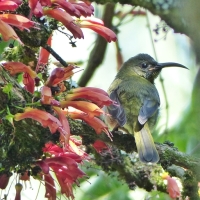 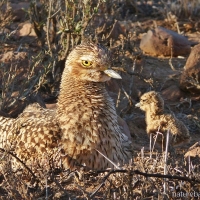