Getting acquainted with a leaf mantis 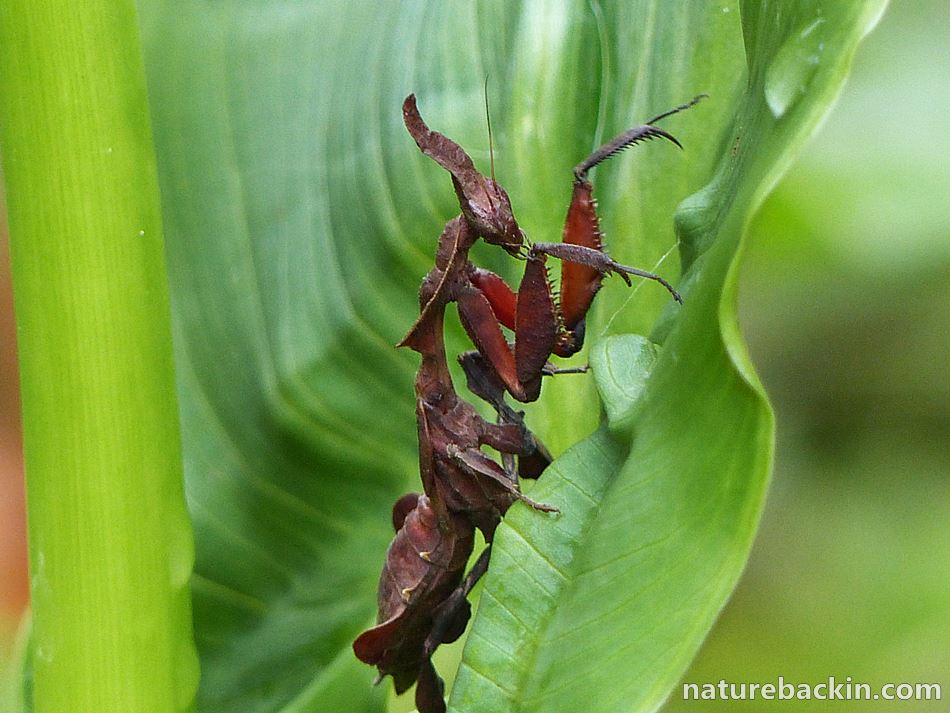 I spotted this mantis on an Arum lily plant only by chance. I had been photographing small beetles that were pollinating the flower when I glanced down and saw this interesting little creature. Usually, we only see the green African Mantis around, so it was special to see this small mantis, commonly called a leaf mantis or a ghost mantis (Phyllocrania paradoxa).

Although the form and the colouration of this mantis serve to camouflage it when in dead leaves, it is part of the family of flower mantids (Hymenopodidae) many of which are shaped and coloured to aid concealment in flowers. All mantises are ambush hunters, and their cryptic colouration serves to deceive potential prey.

I guess that this leaf mantis ventured from the brown leaf litter up into the green world of the Arum lily plant in pursuit of the rain water that had collected on the leaves. It spent quite some time drinking water from the lily leaves

Praying mantises have prominent convex eyes, with a visual range of 2 to 15 metres, set on the top corners of a triangular head that can turn 180° – all the better to see you with! Its binocular vision makes it a very accurate hunter and it grabs its victims with forelegs that are adapted specifically for seizing prey

I was charmed to read that the mantis has a brush of hairs at end of the forelegs that it uses to clean its eyes. It appears that is what it is doing in the photo above

In addition to good eyesight mantises also use their antennae to detect danger. It used to be thought that mantises were deaf, but as recently as the 1980s an ear-like hearing organ was found located in the underside of the thorax between the hindmost legs. This “ear” can detect sonar calls made by insect-eating bats and so enables the mantis to take evasive action, for example, by dropping to the ground.

On the subject of flying, even though they may have wings, not all mantises are capable of flight, and in some species the male can fly though the female cannot. Generally males are more slender than the more robust-looking females. Males have eight, and females have six abdominal segments.

This must be a female leaf mantis – the abdominal segments can be clearly seen. She is holding her forelegs in the position that gave mantises the name “praying” mantis. In some respects “preying” mantis may be more apt

As she started descending from the Arum plant, the mantis curled up her abdomen. To my eye this mantis resembles a fantasy knight designed for a science fiction movie

Mantises are known for their sexual cannibalism, where the female eats the head off her mate and then eats his body. However, cannibalism does not occur during all matings or even in the majority of matings . Mantis behaviour in a laboratory or in captivity (they are kept as pets) is not necessarily the same as when they are living free and are undisturbed.

Mantis eggs are laid in a foamy substance that hardens and protects the eggs until they hatch. Tiny little mantises hatch from the eggs and quickly disperse. Mantises grow in stages when they shed their exoskeletons. The number of moults depends on the species of mantis, and they go through many moults as they develop into adults, usually over the course of about a year.

A close-up of a green African mantis laying her eggs on our dustbin. The foamy substance will harden into a protective casing

Once she was on the ground, she walked off, perhaps in search of brown pastures, so as to better conceal her presence

That this is the first time I have noticed a leaf mantis in the garden indicates their  camouflage is effective (or else that I am unobservant!). I was glad that she had ventured out from her usual cover and that I had the time to make her acquaintance.

29 thoughts on “Getting acquainted with a leaf mantis”