Flowers across the spectrum of the rainbow

Are all the colours of the rainbow reflected in the flowers in the garden? I expected that green flowers would be the hardest to find, but I was wrong.

The seven colours of the rainbow: red, orange, yellow, green, blue, indigo, violet through to red again (Graphic from: commons.wikimedia.org/wiki/File:Rainbow-Regenbogen-meshgradient.png)

I can remember in school science classes being entranced to see white light refracted through a glass prism and dispersed into the seven colours of the rainbow.

These seven colours were named by the English scientist Isaac Newton (1643–1727) after he used a prism to disperse white light into colours. Newton distinguished seven colours in the spectrum to match the seven musical notes in the scale, in line with the belief dating back to the Ancient Greek Sophists that there was a connection between colours, musical notes, the days of the week, and the seven then known objects in the solar system in addition to Earth, these being the sun, the moon, and five planets (Mercury, Venus, Mars, Saturn and Jupiter)

In the 1800s scientific work led to the first discovery that the visible spectrum is only part of a much larger spectrum of electromagnetic waves. Within the visible spectrum, the colour red has the longest wavelength, but the shortest frequency and the lowest energy. Violet light is at the other end of the scale, and has the shortest wavelength and the highest frequency and energy.

A red Freesia laxa in the mini-grassland in our garden

Pollinators, such as honey bees, can see ultraviolet but not red. Many flowers, but not all, have ultraviolet markings that guide pollinators to the nectar and pollen. Although bees cannot see the colour red, they can detect red flowers if they contrast clearly with the surrounding foliage, but they take longer to find red flowers compared to finding flowers in the bluer part of the spectrum.

Many ‘bird flowers’, which have more nectar for their avian visitors than predominantly insect-pollinated flowers, are red in colour. However, insects still visit these flowers although perhaps more in search of their pollen than the nectar. And even though birds are attracted to red flowers, they can see the entire visible spectrum right through to ultraviolet. So birds as well as insects make use of the ultraviolet markings on suitable flowers. 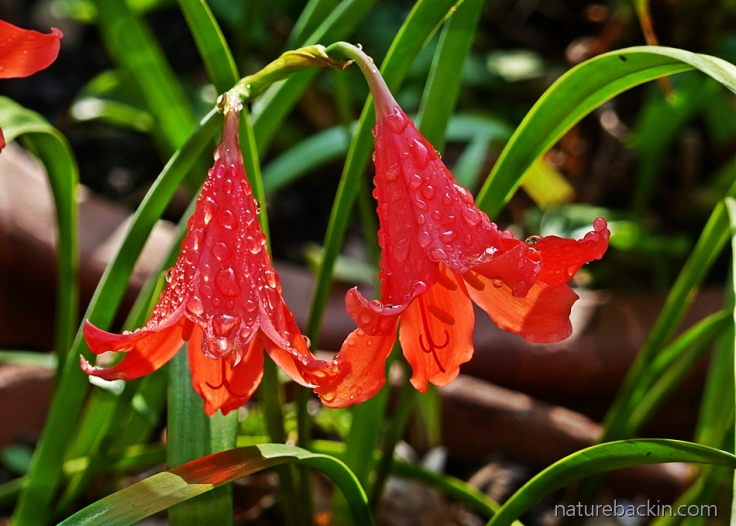 The red-hued bell flowers of the Inanda lily (Cyrtanthus sanguineus). The sanguineus part of the name means ‘blood red’

The next colour on the spectrum is orange. Where is pink, you might ask? Pink, it turns out, is an unsaturated form of red. Orange-coloured flowers are plentiful, so much so that I was spoiled for choice selecting photographs of indigenous orange flowers that grow in our garden. 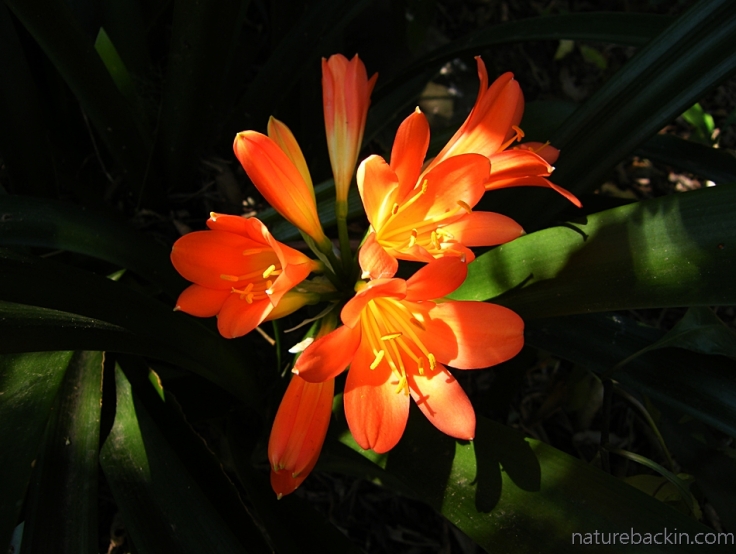 Clivia miniata, a southern African endemic plant, are incredibly popular both in South Africa and abroad. In the wild they are woodland plants and this one glows in a shaft of sunlight in a patch of ‘woodland’ in our garden 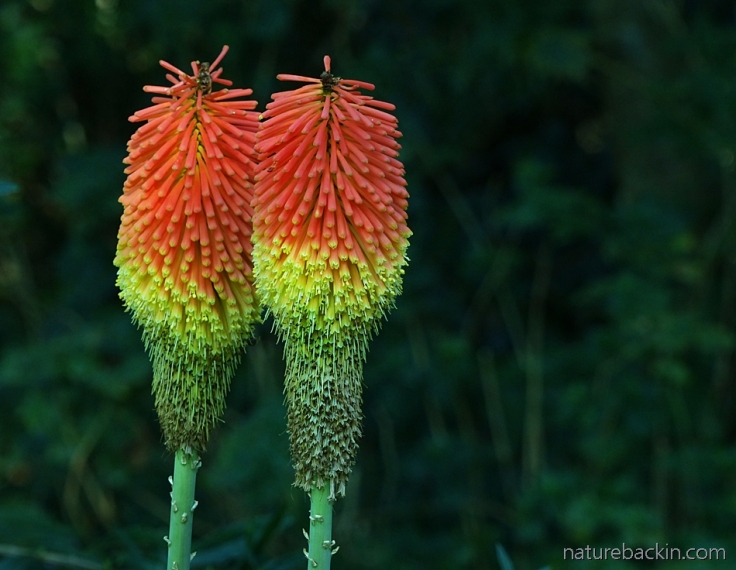 The tubular flowers of the Kniphofia praecox are orange but become yellow as they open. They are visited by both insect and bird pollinators

Although orange, the flowers of this potted Begonia sutherlandii are discreet. This is one of my (many) favourite plants. I have seen it growing wild amongst mossy rocks and crevices alongside mountain streams in patches of woodland in the Drakensburg mountains

A solitary bee gathering pollen on a yellow star flower (Hypoxis hemerocallidea). Traditionally used as a medicine plant for a variety of ailments, it has risen to prominence under the misnomer African potato in recent years as a plant reputed to have almost miraculous healing properties. However, caution is advised if using raw components of this plant as they can be toxic (see http://pza.sanbi.org/hypoxis-hemerocallidea)

The dainty yellow flowers of the clinging aneilema (Aneilema aequinoctiale). Many people may regard this plant as a weed, but we were delighted by the presence of this plant that turned up uninvited in the garden. It can act as a ground cover and it scrambles through low plants in the understorey. Its leaves are slightly ‘sticky’ to touch, which is why, I assume, clinging is part of its name 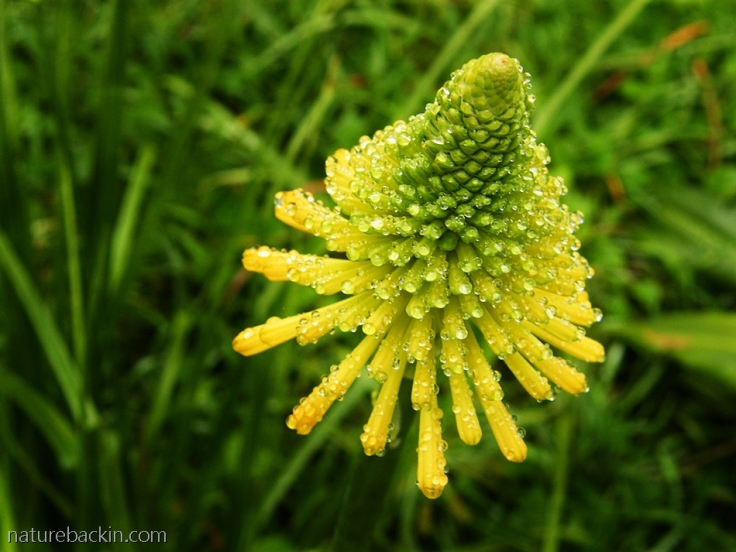 An unusual yellow Kniphofia in bloom. I think it might be a hybrid. It thrived for a number of years in our garden, dying back to be dormant in the winter. Sadly, one spring it failed to regenerate

I was pleasantly surprised to find that I do have photographs of green flowers in our garden, and so there was no need to include photos of  the spear-shaped flowerheads of aloes and kniphofias that remain green for a long time before the flowers open. 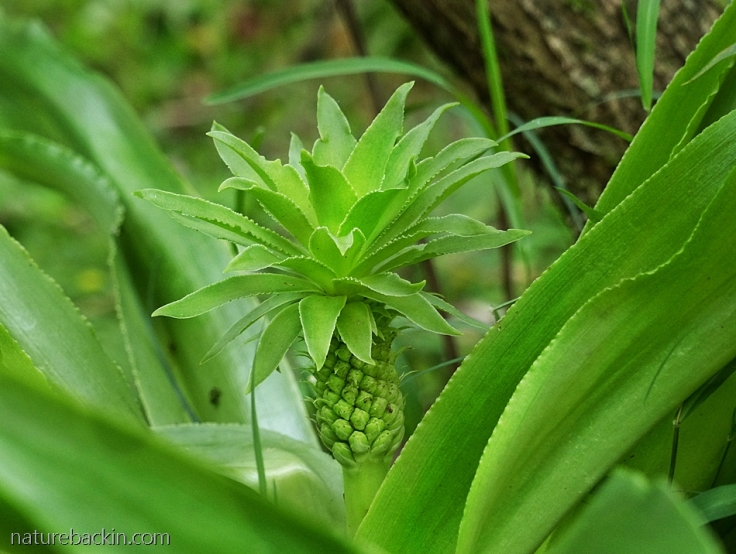 The pineapple lily (Eucomis autumnalis) sending forth its flower spear that is topped with a crown of bracts, causing it to resemble a pineapple

A close-up of the pale green flowers of the pineapple lily. This lily is pollinated by wasps 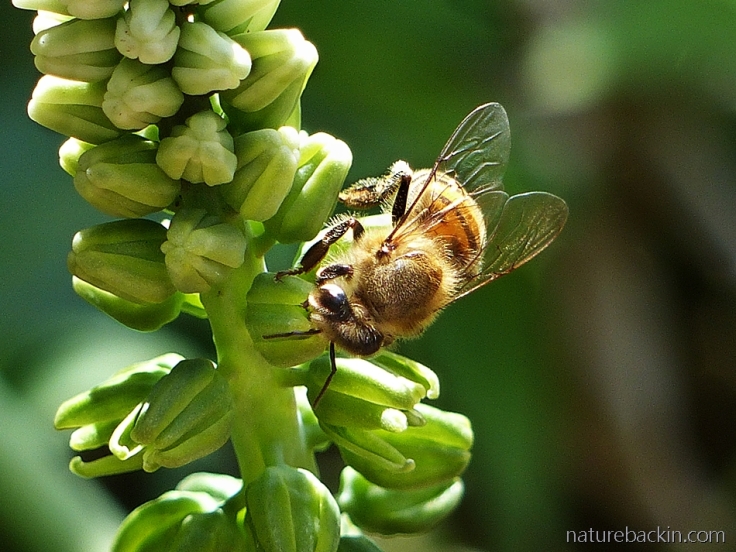 The tiny whitish flowers of the leopard lily (Ledebouria petiolate) turn pale green as they open. The small flowers growing on the short stalks of this low-growing lily-like plant are very popular with insect pollinators, especially honeybees

The green and white flowers of one of the Albucas are surprisingly striking. There are 60 species of Albuca in southern Africa and I am not sure which one this is

The blue, indigo, violet part of the spectrum is not without controversy. In some modern colour spectrums the colour that Newton called indigo is simply excluded. In others, seven spectral colours are retained, but Newton’s blue is renamed cyan (a pale blue), his indigo is renamed blue, and violet remains as he named it.

The human eye is not all that sensitive to colours in the blue/indigo part of the spectrum and it can be difficult to differentiate between what Newton called blue and indigo. When I was looking through my photographs of flowers to illustrate the spectrum, I thought more in terms of pale blue, dark blue (indigo) and violet, leaving out the more saturated violet that I would call purple.

So what follows are three pale blue flowers, three darker blue flowers – the colour I had the most difficulty finding – and three violet-coloured flowers.

The first of the (pale) blue flowers: a Commelina. I think that this is a blue commelina (Commelina dregeanum), which has attracted a solitary bee that is collecting pollen

Rather than showcase the well-known plumbago or agapanthus, beautiful though they are, I chose the unassuming Natal blue bell (Thunbergia natalensis), a small shrubby plant that grows wild in grassland and forest margins. They readily self-seed in the garden and seem to prefer damp and shady places 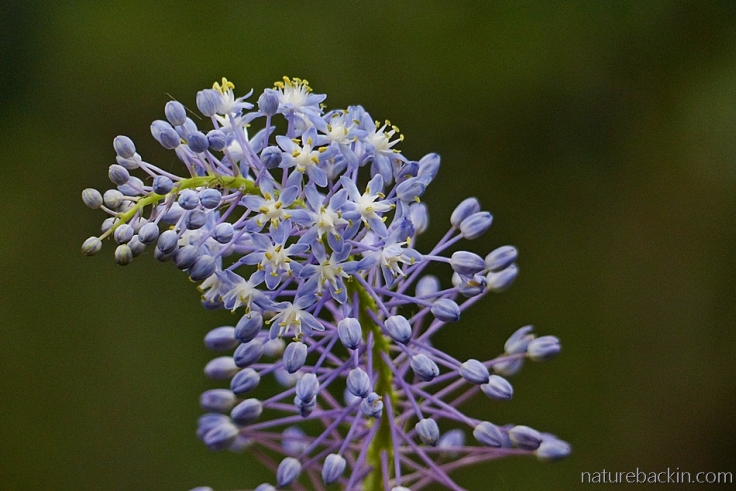 Although I have showcased this plant before, I could not resist including the lovely Blue Squill (Merwillia plumbea, formerly Scilla natalensis), as the third pale blue flower 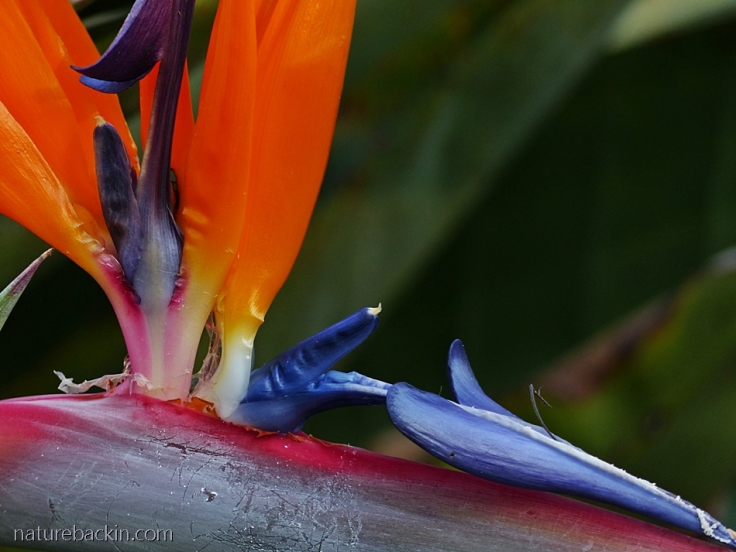 For the first plant featuring indigo (dark blue) I chose the Strelizia reginae (bird of paradise or crane flower). The orange sepals are more noticeable than the deep blue petals

I grew up knowing this flowering shrub as the Oxford and Cambridge on account of its flowers having both pale and dark blue lobes (reflecting the different blues of the jerseys worn by members of the competing rowing teams of the two universities). I discover that it is also known as Blue cat’s whiskers. Its botanical name is Rotheca myricoides (formerly Clerodendrum myricoides). Because of the bi-coloured blues of this flower, of course it can equally be featured as a representative of (pale) blue or of the darker blue (indigo)

Perhaps the various hues of blue of the flowers of this giant salvia (Brillantaisia subulugurica) are not truly dark enough to be considered dark blue (or indigo), but they aren’t exactly uniformly pale either. Indigenous to Zimbabwe and tropical Africa, this is the only plant featured in this post that is not truly southern African. There is something about this photo that reminds me of an old botanical print

The first of the violet-coloured flowers is this Bush Violet (Barleria obtusa, or possibly Barleria repens) decorated with raindrops 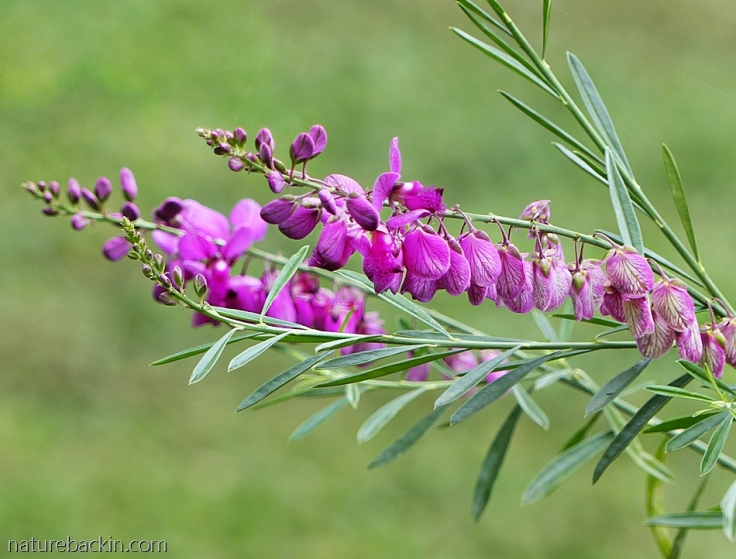 The second of the violet-coloured flowers belong to the purple broom (Polygala virgate). Common to many flowers in the blue/violet part of the spectrum the colour can be really variable depending on the light, but in this photo the colour is suitably violet

And I tie this post up with a ribbon, in the form of the ribbon bush (Hypoestes aristata). The flowers of this plant attract many insects, including butterflies (see here) and tangle-veined flies (see here)

39 thoughts on “Flowers across the spectrum of the rainbow”