Cats and the wildlife garden

What to do if you love wild birds, but you also love cats? We decided to choose a compromise that we think of as a middle way.

Yes, cats do catch birds and other wildlife, although some cats are more avid hunters than others. Yes, hunting comes naturally to cats, but that does not mean that hunting by high-density populations of pet cats in the suburbs is natural. Imagine if visitors to game reserves all had pet cheetahs, and were allowed to let them loose to hunt “naturally”? The sheer numbers would make it unnatural – too many prey killed, and with the high density of cheetahs, fights would probably break out among them too. I think that this is an appropriate analogy and it is why I believe that suburban pet cats should be prevented from hunting wildlife.

The destructive behaviour of cats should be contained, but it should not be forgotten that there are many other widespread and harmful threats to wildlife. I find it strange that there are people who get highly emotional and vocal about cats, but have far less, if anything, to say about practices such as habitat destruction, or about anglers catching  (and people eating) endangered species of fish, or the high number of road kills of wild animals from speeding cars, or about destructive driving on beaches and off-road, or the indiscriminate use of pesticides and herbicides, to name just a few random examples. Listening to anti-cat lobbyists, one might think that cats are far more lethal and villainous than any of these other damaging and pervasive human practices! Yes! Lots of exclamation marks here!

Valuing nature in broad terms, and describing myself as a generalist, I do not prefer one species over another. My love for nature includes respecting sharks, hadedas, hyaenas, spiders, frogs, dogs, monkeys, snakes, cockatoos, hadedas, elephants, mice and cats! All of these animals have their haters, for a variety of reasons (often irrational or selfish), and this list is not nearly comprehensive.

So, how to explain the fact that we keep pet cats while at the same time wishing that our suburbs could be more wildlife friendly? We have addressed this contradiction by using fences to create an enclosed “cat garden”. Perhaps some cat-lovers may think confining cats in this way is unnacceptable, noting that cats like to wander and that cats are mostly nocturnal. Yes they do and are, but when wandering, cats risk getting killed or injured by traffic, chased by dogs, injured in cat fights, and all too often they disappear and never come home, leaving their owners distraught. Keeping cats enclosed, not only stops them from hunting, but it also keeps the cats themselves safe. 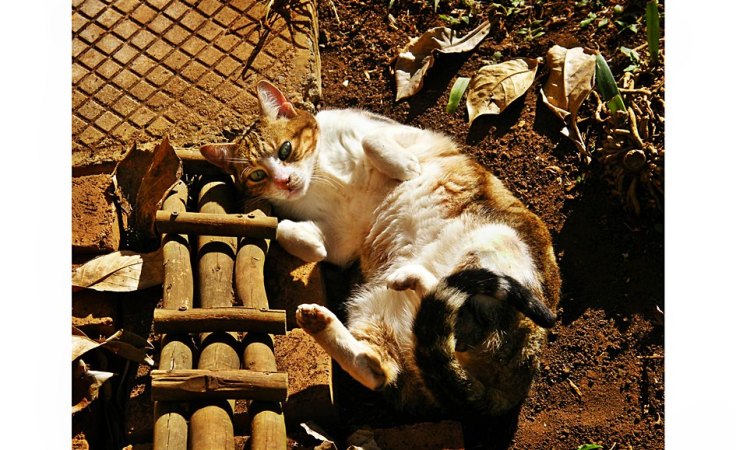 In their enclosed garden, our cats get fresh air, can climb trees, eat grass and roll in the earth if they want to

In the end it is a question of trying to achieve some kind of balance; choosing a middle way. On the other side of the cats’ enclosure, the ground-foraging birds and other creatures go about their business without being hunted by our cats. I have posted a companion piece on pet dogs and wildlife in suburban gardens here

We had always kept our cats in at night, but we progressed from there to make our enclosed “cat garden” about eight years ago. It has worked out really well, and much to our surprise, the cats adapted seamlessly, and never showed signs of wanting to get out.

The fence of the cats’ enclosure is simple, and the top section is angled inwards so that should a cat want to climb the fence, it can’t get over the top. The cats seem to realise that just be looking, and none of them try climbing the fence.

After we scoured the Internet for ideas, my husband made the fence (and dug all the holes) pretty much on his own, supervised by Nina the tabby cat, with only me as an occasional assistant. Unrolling the vertical coils of weld-mesh as the fence progressed proved to be quite tricky and involved a high level of cooperation. The top section that angles in, is chicken-wire stretched over wires supported by homemade aluminium brackets. 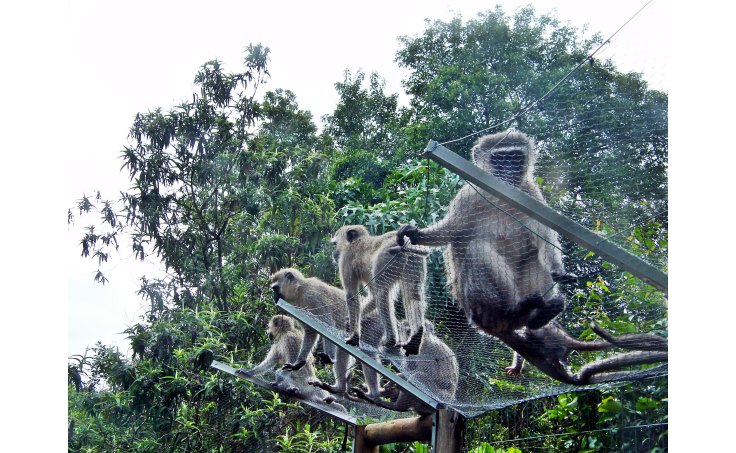 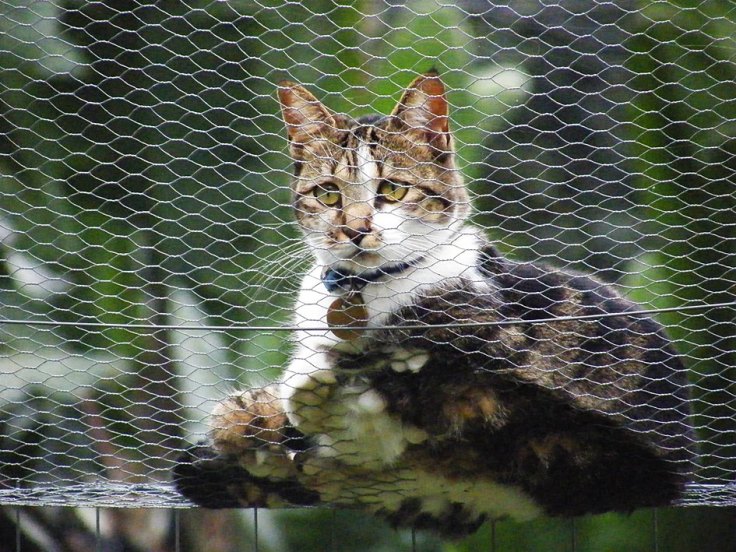 At one time a neighbour’s cat used to visit, enjoying the novelty of just hanging out while watching our cats. This pic really calls for a LOLCATS-style caption, don’t you think?

As anyone who has cats knows, cats like to spend a lot of time in favourite comfortable spots indoors too, and of course they like to be with us wherever we are. But when they are outside, our cats do have things to do, even though the garden is enclosed. 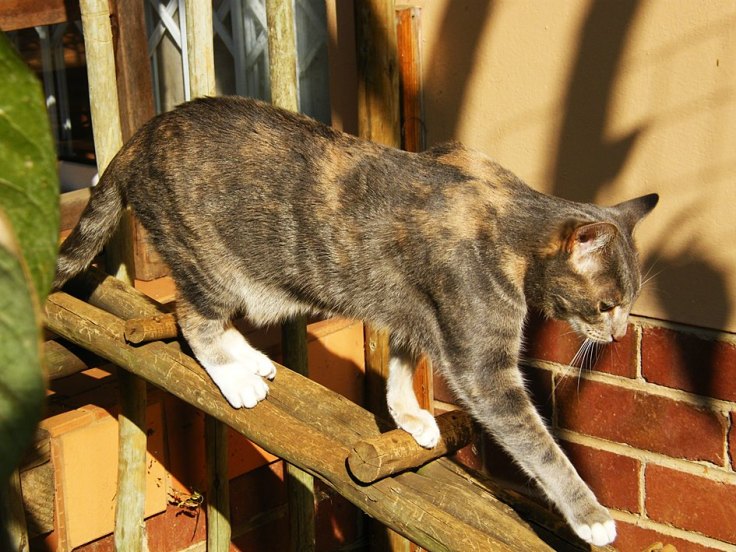 They have walkways, initially made for an elderly cat that was getting a bit arthritic, but even the young cats like to use them (and at one point our puppy too!)

The cats have two outside “sand boxes”. One of my less pleasant domestic duties is to clean it out now and again, using a trowel. They have inside litter trays too, but of our current population of four cats, only one chooses to use them. This picture is of our beloved formerly feral cat, Ned, caring foster parent to all the feral kittens we have fostered or adopted. He died last year at the age of 18 a few weeks after the brother that he adored, and they are sorely missed.

All our cats are rescued feral cats, mostly from our previous places of work. Three of the cats still with us (all different ages) were orphaned when only a few days old, and on each occasion they were picked up by colleagues of my husband and handed over to him to sort out! We took each of them on and hand-reared them, and after that it was impossible to part with them.

Our cats have several logs in the enclosed garden where they can sharpen their claws, as well as larger logs and reclaimed old wooden railway sleepers for spending time on when they are outdoors

The cats can help themselves to catnip whenever they feel like it, which is only now and again. However, one of them can’t stand even the smell of catnip 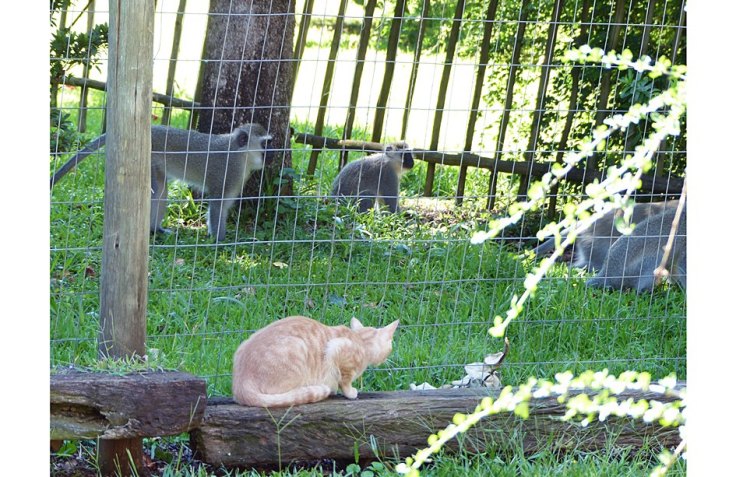 The cats use the fence as a safety barrier, should they venture closer to investigate visiting Vervet Monkeys, but mostly they keep their distance

The monkeys like to watch the cats too! Contrary to popular belief, the monkeys have not shown any aggression towards the cats, only occasional curiosity mostly from youngsters, which is sometimes mutual

So all in all, we think that the enclosed garden has been a big success. We no longer feel anxious when we see birds and other potential cat-prey in the garden. We also feel less anxious about the safety of the cats themselves. Since they have been fenced in, there have been no injuries, and no abscesses from cat fights.

I have been talking about cats catching birds, but in our area, the opposite, though very infrequently, can occur: cats caught by birds. Before we made the enclosed cat-garden, most heartbreakingly, one of our cats was killed and then dropped by a raptor, probably one of the Crowned Eagles (one of the three most powerful eagles in Africa) that live in our area. More usual prey animals for the Crowned Eagles are small wild mammals, including monkeys, and also birds, but on rare occasions small pets do fall victim to these impressive birds. Because the enclosed garden keeps the cats close to the house, we hope that it is less likely that any of them will be captured by an eagle.

There are several species of raptor in our area that prey on birds, rodents and other creatures. In addition to the Crowned Eagle there are three species of owl, as well as small kestrels and a goshawk (I think, but as they are quite reclusive and seen only fleetingly I have not been able to identify them), the occasional visiting Yellow-billed Kite, and a pair of African Harrier-hawks (formerly known as Gymnogenes). There used to be a pair of Blacksparrow Hawks that nested for several years in an old a eucalyptus tree behind our garden, but the disappearance of these birds is a story for another day. 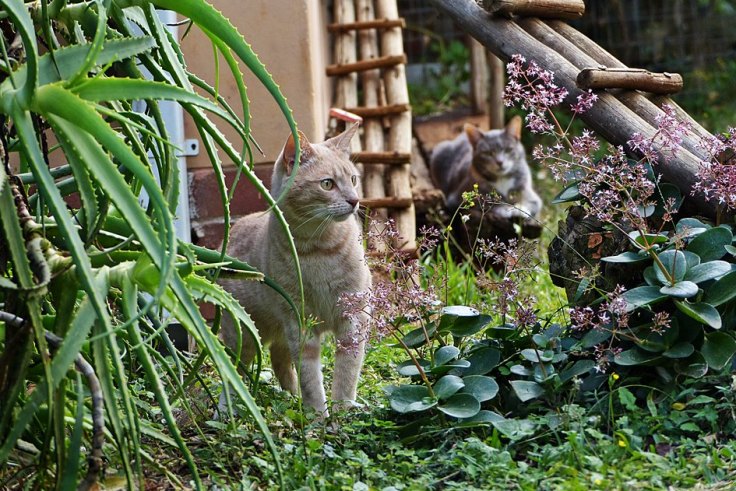 You may have noticed that I have changed my “posting day” from Sunday evenings (South African time) to Thursdays, and let’s see how this goes.

I realise somewhat disbelievingly that it is six months since I started this blog! I am finding that through blogging I am learning such a lot and I so appreciate all its followers and regular visitors. Thank you! Thanks also to everyone who has taken the trouble to “Like” posts or to comment. Making contact with so many interesting people via blogging continues to be an absolute pleasure.

19 thoughts on “Cats and the wildlife garden” 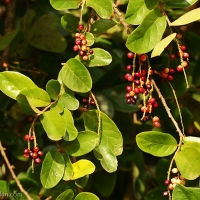