A hungry baby flycatcher and its hardworking mother 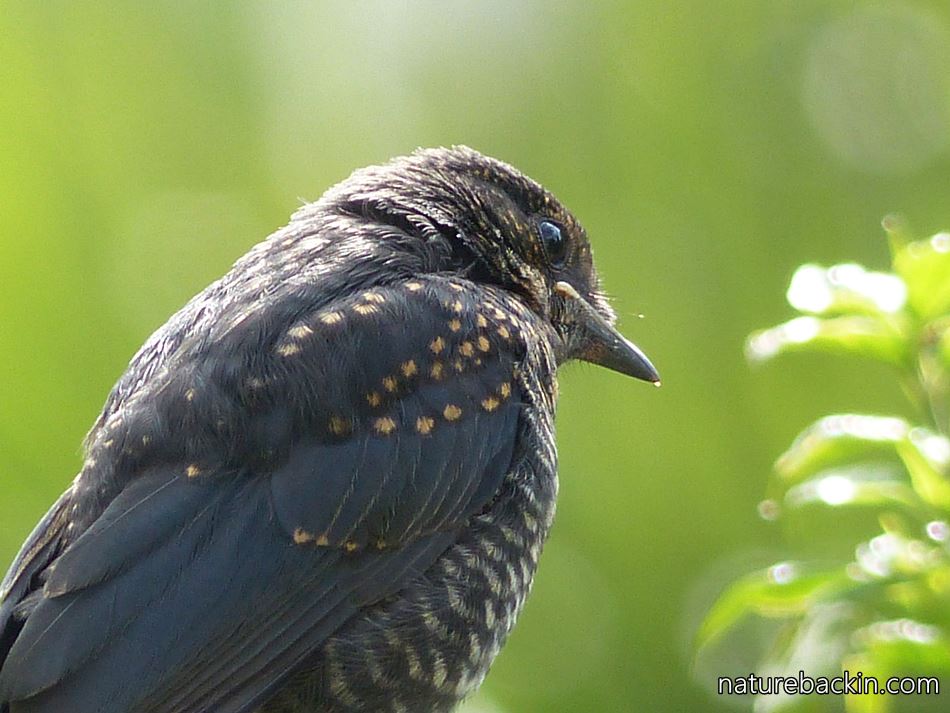 A persistent and insistent tseep-tseep-tseep outside the bedroom window attracted my attention. Looking out I saw a fledgling perching on top the fence to the cat’s garden, calling repeatedly, reminding its parent to feed it.

Begging for food is evidently hard work and requires a lot of concentration. But now and again the fledgling’s attention lapsed and it practiced spreading its wings and it even played with some dry leaves stuck in section of the fence, flicking them around. But mostly it kept its insistent call going continuously, opening its mouth repeatedly as if to make clear what its entreaties were all about. 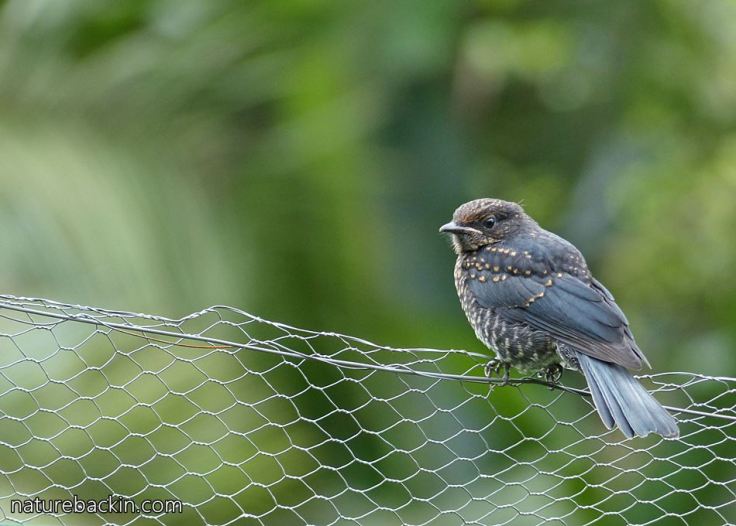 A fledgling Southern Black Flycatcher, waiting for its parent to bring it some food 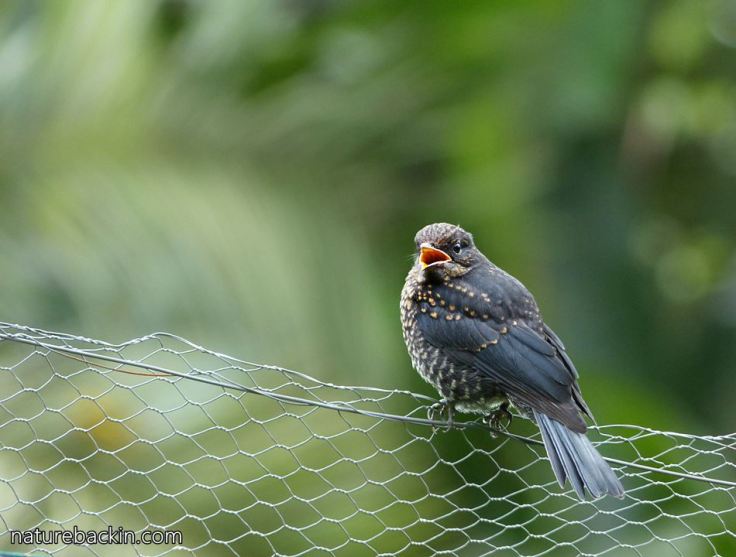 It paused from its calling briefly to stretch its wings and hop along the fence perhaps out of frustration, or perhaps hoping to draw its parent’s attention

Seeing its parent approaching, the fledgling widens its gape in anticipation 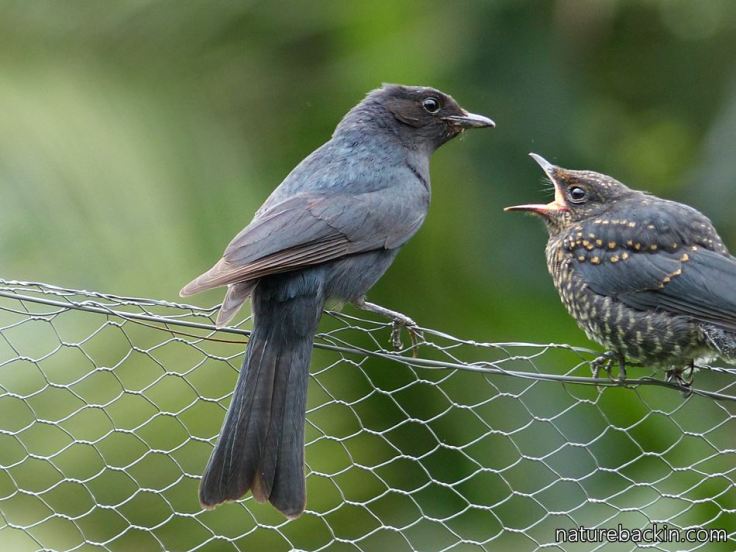 The hardworking and ever obliging mother appeared with an insect in its bill, which it rapidly deposited into the youngster’s gaping mouth, only temporarily satisfying the hungry youngster

I first posted about Southern Black Flycatchers here, and  this is the first time I have been lucky enough to see a fledgling.

Southern Black flycatchers form monogamous pairs when breeding. The female builds the nest, though she is accompanied by the male when gathering nest materials. Usually a cup-shaped hollow in a tree or in other vegetation is found, which she lines with plant material. In KwaZulu-Natal these flycatchers lay between 1 to 3 eggs, and the eggs are incubated by the female.

Both adults feed nestlings and fledglings, but on the two successive days when we saw this fledgling, it was accompanied by only one parent, apparently the female, and she worked tirelessly, feeding the baby on insects that she had hawked or caught on the ground.

As soon as she had fed the baby the adult immediately started watching for prey, the fence providing a good vantage point, with the baby keeping up a continuous series of repetitive chirpings 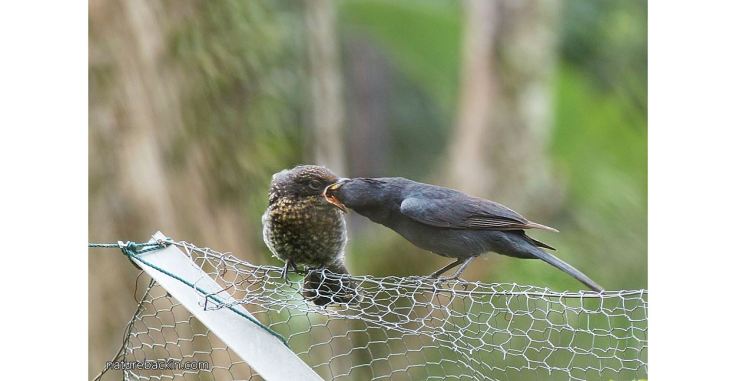 The baby did not have to wait long for the next food item. As the mother approached it widened its gape and she quickly thrust the morsel down the baby’s throat

It was astonishing to see the pace the parent kept up, working without her mate to feed the hungry fledgling on her own. We saw them on the same stretch of fence for two days in a row. When they decided to move on, we were surprised at how well the fledgling could fly. 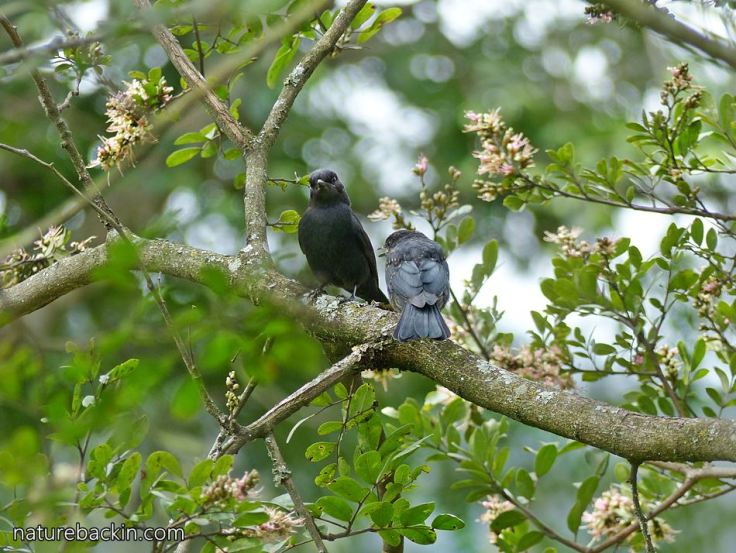 Later in the day I heard it calling from the branches of a Forest Boer-bean (Schotia latifolia). I crept up as discreetly as I could and managed to snap one photo before they flew off. I was disappointed that I disturbed them and also because the flowering tree is a lot more photogenic than the fence

30 thoughts on “A hungry baby flycatcher and its hardworking mother”