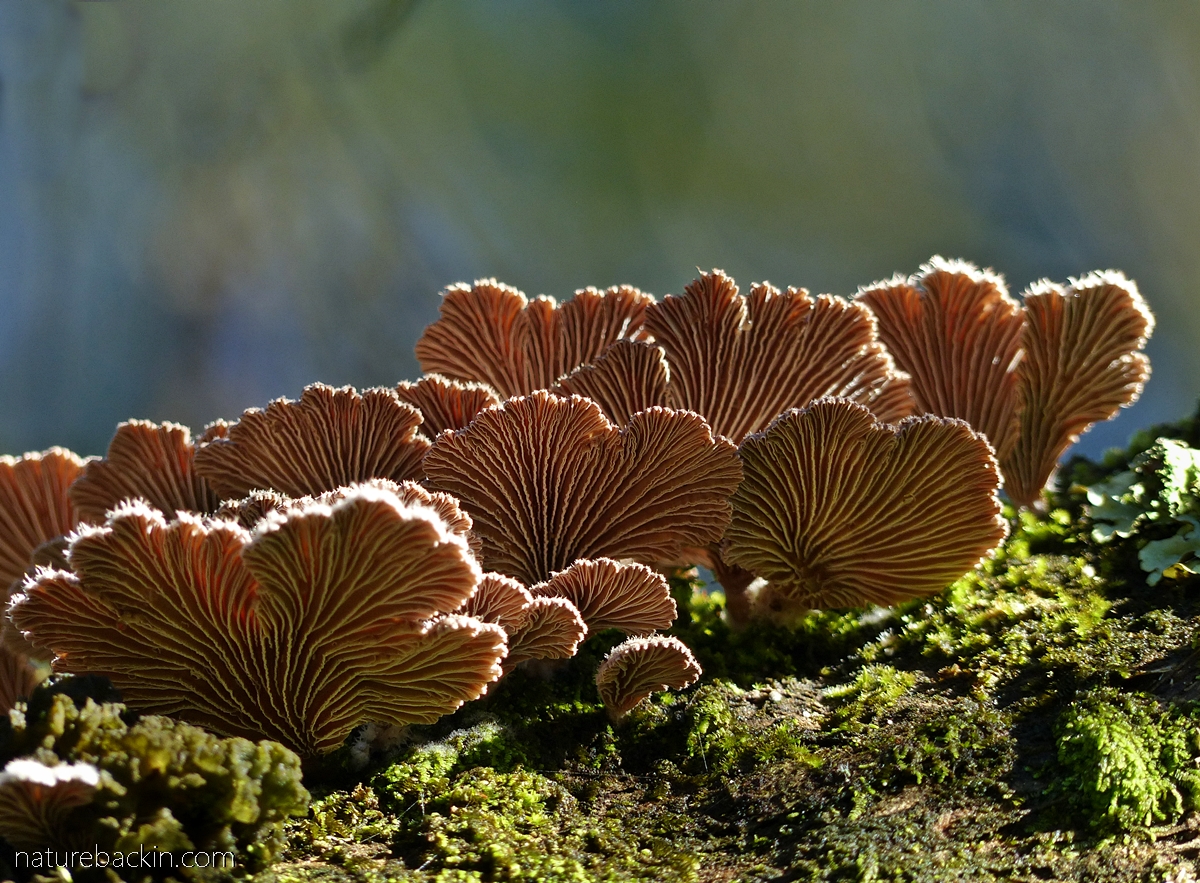 The variety in shape, form and colour of the fungi that fruit in our garden, usually during the wet and warmth of summer, is incredible. In addition to the mushroom/toadstool forms that were featured in last week’s post, some other forms of fungi include bracket, crust, puffball, bird’s nest, earthstar, stinkhorn, coral, jelly ears, saddle and cup.

Starting with one of the smallest and colourful, these small orange fruiting bodies grow on a still-standing trunk of a dead tree in our garden. A few years ago the tree tipped up during a windstorm, and although we propped it back up and put soil around the roots, unfortunately the tree died anyway. We left the dead tree standing as a perching place for birds and as habitat for insects and other creatures – and of course also for fungi.

Over time the dead tree has lost its branches and much of the bark on the remaining part of the trunk has gone. The small orange fruiting bodies of this fungus emerge along cracks along the trunk. I hazard a guess that this fungus is the fan-shaped or spatula-shaped jelly fungus (Dacryopinax spathularia).

If this ID is correct this fungi occurs in many countries across the world including elsewhere in Africa, in the Americas, in Asia and in Australia and New Zealand. And if it is this particular jelly fungus, it is edible and is used in Chinese cuisine. Needless to say, in the absence of having any real knowledge of fungi I have not tried eating it.

Also on the same dead tree stump an interesting fungus materialised this past summer. As it matured the fruit opened up into a funnel shape attached to a stalk that emerged from a crack in the wood.

Above is the same fungus emerging from a crack before the fruit developed its funnel shape.

And here it is again when it is more fully developed, photographed from above from where the funnel shape is not so apparent.

And here it is photographed from below showing its beautiful gills.

In the past fungi were regarded as plants, but they are now positioned in a kingdom of their own being neither plants nor animals. The cell walls of fungi are composed of chitin, which is also found in the exoskeletons of insects and the outer shells of crustaceans. Unlike plants, fungi lack chlorophyll, the green pigment found in plants, which enables photosynthesis. Instead, what fungi do is “excrete enzymes that breakdown and dissolve living and dead plant and animal matter into simpler nutrients that can be reabsorbed back into the fungal cells” (Goldman & Gryzenhout, p.15). Whereas plants store their food reserves as carbohydrates, fungi store their food reserves in the form of glycogen (a form of glucose) and lipids.

I have been fascinated to read about the development of a vegan alternative to leather, which uses the fibrous mycelium roots of fungi to grow a mass that can be processed into a leather-like material. Already there are companies that are starting to use ‘mushroom leather’ in the fashion industry.

Another small tree in our garden died from an unknown cause. As it was a tree favoured by birds we left it to stand, removing some branches as they became brittle over time. After several years only the bottom section of the trunk remains, but during these years it has hosted, along with lovely mosses and lichen, some spectacular fungi, including what is possibly a split-gill fungus in the above photo. The fan-shaped fruiting bodies are beautifully gilled underneath and the tops are kind of fluffy.

I fancy that it looks more like a submarine species that would not look out of place on a coral reef rather than on a dead tree in a suburban garden!

On the same tree, another interesting fungus appeared. When it first emerged its mostly creamy white soft folds were tinged with rosy and amber colours on the outer sides. As it aged its shape became more elaborate and its colours deepened.

Above are young fruiting bodies sharing space with moss and other small fungi on the same trunk of the dead tree.

As they matured the fruiting bodies looked more like the fungus known as the jelly ear fungus, which can be quite variable in appearance. The ones on this tree appear not to be as gelatinous as a similar fungus on another tree that can just be seen in the background in the above photo. The apparently more gelatinous jelly ear fungus that grew in profusion on the trunk of a nearby dead Solanum giganteum (healing leaf tree) is shown in the photo below.

This jelly ear fungus (Aulicularia auricula-judae) is another species that is pretty much cosmopolitan and (assuming it is correctly identified) is edible. Although tasteless in itself, it is said to soak up other flavours and so can be good in soups and stews. I cannot vouch for this as I have not eaten any of the fungi that appear in our garden. The jelly ear fungus is also reputed to be of medicinal value, including having cholesterol-lowering properties.

This closer view of the jelly-ear fungus shows its rather rubbery texture. In dry weather it can dry out but the dried lobes revive in wet weather and continue to produce spores.

A stump of a jacaranda tree (an alien plant in South Africa) also hosts jelly ear fungi, which can be seen sprouting on the top and on the left-hand side of the stump. In the foreground is a group of ink cap mushrooms.

Photographed in bright morning sunshine and viewed from above, jelly ear fungi fruiting bodies in varying stages of maturity adorn the top of the jacaranda tree stump.

Here is a close-up taken on an overcast day. The spore-bearing inner surfaces of the lobes usually face downwards.

The above photo was taken a few years after the previous photos and it shows that the stump has decomposed further. A jelly ear fungus is still present along with other species of fungi. This photo in some ways reminds me of a fairy tale illustration. In folklore in many countries, mushrooms and other fungi have become associated with the magical and the supernatural, partly because of the apparently mysterious way in which many fungi appear quite suddenly and can disappear just as quickly.

This post features a variety of fungi growing on the remains of only four trees in the garden. There are plenty more fungi that I have photographed in our garden and would like to share, but these will be the subject of a future post.

Smith, Kat. [n.d.] What is mushroom leather? Why this alt leather has Adidas’ attention. https://www.livekindly.co/what-is-mushroom-leather/