Butterflies – Reasons to be cheerful

Butterflies are widely appreciated for their beauty and their fleetness on the wing, as much as they are associated with transformation, hope, joy and love.

In this post I celebrate some of the butterflies that visit our garden – choosing from those that settled long enough to be photographed.

One of the smallest butterflies I have photographed in the garden is the Common Zebra Blue. When they settle it is usually with their wings folded, concealing the blue colouring of the upper side of the wings. The average wingspan is only 21 to 30 mm.

This much larger butterfly with an average wingspan of 75-90 mm seems to be a winter visitor. It is associated with forest or well wooded savanna. It was interesting to identify this butterfly although I am not entirely certain I am correct in thinking it is a Variable Diadem. This species of butterfly not only mimics the colouring of another species, but there are two forms of the Variable Diadem, with one form mimicking the Layman and the other mimicking the Friar, species of butterfly that are both distasteful to predators. I think that the one in the photograph is the form that mimics the Layman, and its full name is Hypolimnas anthedon wahlbergi f. mina, whereas the other form that mimics the Friar is Hypolimnas anthedon wahlbergi f. wahlbergi. The caterpillars (larvae) of the Variable Diadem feed on nettles, especially the river nettle (Laportea peduncularis).

The Clouded Forester (wingspan 35-49 mm) occurs primarily in forest and woodland and prefers damp and shady environments. I saw this one sunning itself on a plant at our garden pond and did not see it fly. I must look out for these butterflies as the hindwings have snowy-white undersides that are conspicuous in flight. The larval host plants for the Clouded Forester species are tuberous woody climbers in the Dioscorea genus.

Also seen sunning itself at the pond, on the leaves of an Arum Lily, was a mighty flighty African Leopard butterfly (wingspan 40-48 mm), which would not let me approach. This butterfly is associated with savanna and woodland and its larval host plants belong to the Willow family. The African Leopard’s nocturnal caterpillars will feed on a variety of plants in this family including native and exotic Salix (willows), exotic poplars, and also species of plants in the Dovyalis and Oncoba families, such as the Kei Apple (Dovyalis caffra), which we grow in our garden. 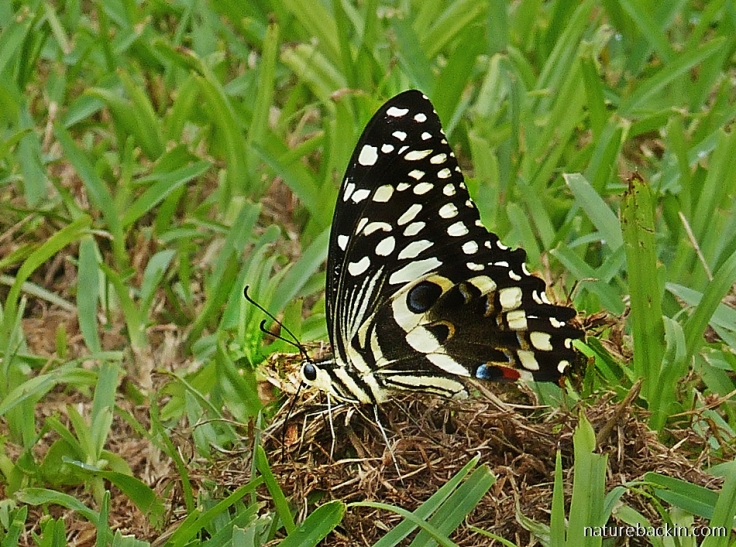 One of the showiest and flightiest of all butterflies flitting through our garden is the large Citrus Swallowtail with a wingspan of 90 to 110 mm. It occurs in many different habitats and larval host plants include Apiaciae species (celery, parsley or carrot family) and Rutaceae species (Rue family), which include citrus species as reflected in its name. This butterfly was flitting over the lawn and landing to sip morning dew that had collected in small pockets of lawn clippings. It too would not tolerate me approaching and I had to zoom in to photograph it. 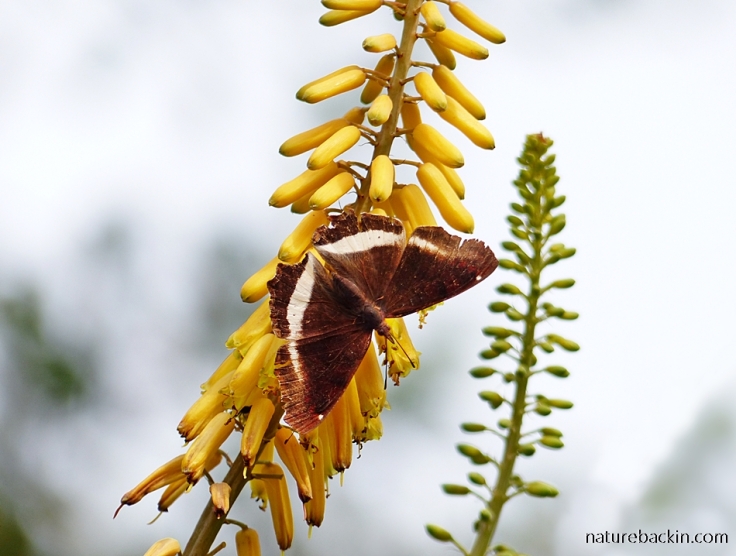 I managed to photograph this Pied Piper (wingspan 45-55 mm) nectaring on Fence Aloe flowers against the background of a cloudy sky. It tolerated me sitting on the ground but not if I stood up. They are often found in disturbed area of forest and the larvae feed on stinging nettles (Tragia glabrata) and also the Castor Oil plant (Ricinus communis). 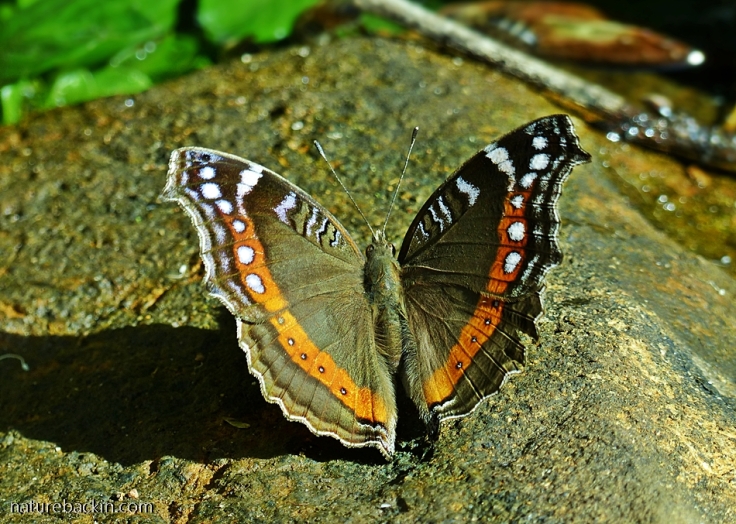 I have posted about the Garden Commodore (also known as the Garden Inspector) before, see here. This grassland and savanna species of butterfly is medium-sized with a wingspan of 45-60 mm. These butterflies hang around close to (and sometimes inside) the house during the winter months. They can be very tame and sometimes even land on us when we are sitting outside in the winter sunshine. This individual was photographed at the garden pond. It and the one in the header photo are showing the colours of the winter or dry-season form. We see Garden Commodores in the garden each winter, whereas the Gaudy Commodore is a far less frequent visitor. Larval host plants of both butterflies include several species of Plectranthus.

Only last week did I get the opportunity to notice this species of butterfly, seeing this one that had settled quite high off the ground in a Pigeonwood tree. It let me walk around underneath where I could appreciate the “ears” tufting its wings and admire the white underside to its body and its folded “brush” forelegs. The photo shows why this Commodore is sometimes known as the Eared Commodore, but it does not show why it is better known as the Dead-leaf Commodore. When the butterfly rests with wings folded the colour and shape of underside of the wings closely resemble a dead leaf, providing most useful camouflage for this forest and woodland species.

I rather like the relatively sober colouring of what I take to be a Common Black-eye butterfly (wingspan 18-32 mm) photographed trying to absorb some warmth from a rock on an overcast day. In my pocket guide to butterflies it says that the male of this savanna and grassland species is “territorial, perching on low rocks and shrubs chasing intruders away”. Well I didn’t see any intruders for it to chase, but it is gratifying to see it perching on a low rock as described in the guide. Its caterpillars feed on succulent plants in the Crassulaceae family. 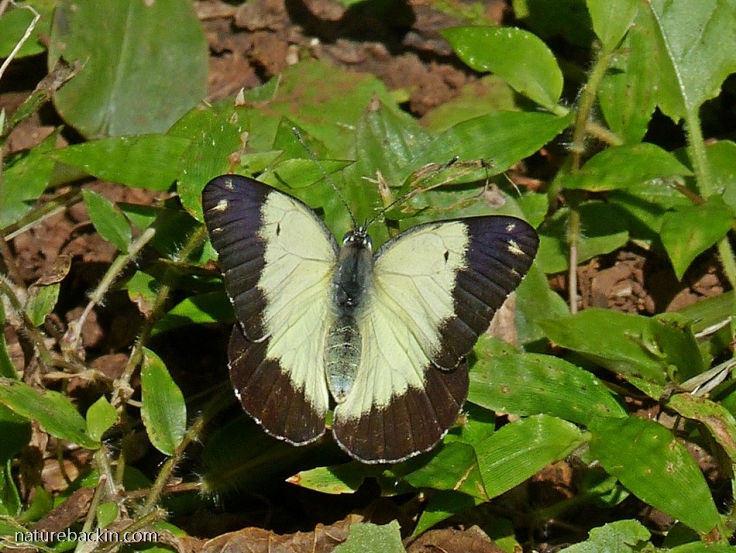 Most noticeable during autumn is the African Common White butterfly that somehow manages to look larger than its 40-45 mm wingspan would indicate. It often perches with its wings open and so the more colourful underside of the wing is more often seen when it is in flight or nectaring from flowering plants.

African Common White butterfly showing the underside of the wings

I took this photo while a pair of African Common White butterflies spent a busy morning taking nectar from the flowers of a Ribbon Bush (Hypoestes aristata), an autumn-flowering shrub that is popular with a variety of insects. The African Common White is a bushveld and woodland species of butterfly and its larval host plants are species of Boscia, Capparis and Maerua.

The Hesperiidae family is large with dozens of species occurring in South Africa. At a flying guess I think that this butterfly might be from the subfamily, Hesperiinae, of grass skippers or banded skippers. Common names for species within this subfamily include skipper, hopper, swift and (rather mystifyingly) hottentot. As an even wilder guess I wonder if the butterfly I photographed is perhaps a Dark-banded Swift? The Hesperiidae family illustrates well the often blurred distinction between what we call butterflies and moths.

Sticking with the theme of butterflies enjoying the Ribbon Bush is a photograph of one of the browns or bush browns. Also a bit of guess, I think this is an Eyed Bush Brown (wingspan 38-48 mm). It is associated with wetlands, riversides and dams, so I wonder if our pond and a stream in the vicinity would be enough to attract it? We do, however, have its larval food plant in the garden – the Guinea Grass (Panicum maximum). It is worth noting that many butterfly (and moth) species utilise species of grasses as food plants, as I recently discovered, so local wild grasses should not be overlooked when providing plants for a diversity of species in the garden.

Rather easier to identify (I think) is the Common Bush Brown (wingspan 40-48 mm), a creature of the forest and well wooded savanna areas. I often see individuals perched low down especially on grasses. Their caterpillars are nocturnal and they feed on forest shade grasses, including on basket grasses such as Oplismenus hirtellus, which we use in our garden as an effective ground cover in shady areas. These grasses are popular with several species of birds too, especially when seeding.

The Blood-red Acraea and its larval host plant, the African Dog-rose (Xylotheca kraussiana) featured in a previous post, see here. In these two photos, a male Blood-red Acraea is using its proboscis to suck up droplets of rain that have collected on moss and dry leaves in an area paved with bricks. 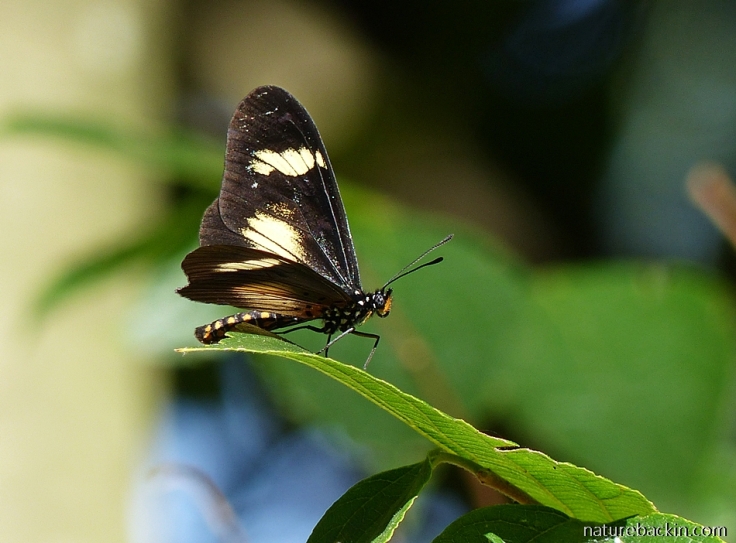 Another butterfly species commonly seen around the garden in the autumn is another species of Acraea, the Dusky Acraea, a forest species with a wingspan of 45-60 mm. It is an attractive butterfly that seems to favour perching quite high up from the ground. Its larval host plants are species of nettle (Urticaceae).

Like most people, I enjoy seeing butterflies around. They do seem to encapsulate a sense of freedom, and I like that they are commonly associated with hopeful notions relating to transformation and rebirth, love and joy.

A tremendous variety of flowering plants are attractive to butterflies, though not all butterflies eat nectar. Some eat from fallen fruits and some butterflies do not eat at all. When planting for butterflies, it is necessary also to plant for caterpillars, which of course are butterflies in their larval form.

Butterflies will not stay to breed in areas without larval host plants. Some caterpillars can feed off a number of species of plants and others are very specific with some species feeding off only one species of plant. For this reason it is crucial to plant native plants especially regional natives, in order to sustain diverse species of butterfly.

Whether you have a balcony or a large garden there is plenty of scope to find suitable plants that provide for butterflies. There are many sources of information out there to help find native plants that will sustain butterflies and many other creatures besides. In the face of all that is daunting, why not go boldly forth and plant some butterfly food plants today!

49 thoughts on “Butterflies – Reasons to be cheerful”