Receding waters at low tide reveal sea life in the lee of onshore reefs and in shallow rock pools. Snorkeling along reefs in even shallow water reveals a dazzling display, and rock pools too provide insights into subaquatic worlds within worlds.

Following on from last week’s post featuring Sodwana Bay on the Maputaland coast, all photos in this post were taken at the rock pools off Jesser Point at the southern end of Sodwana Bay. 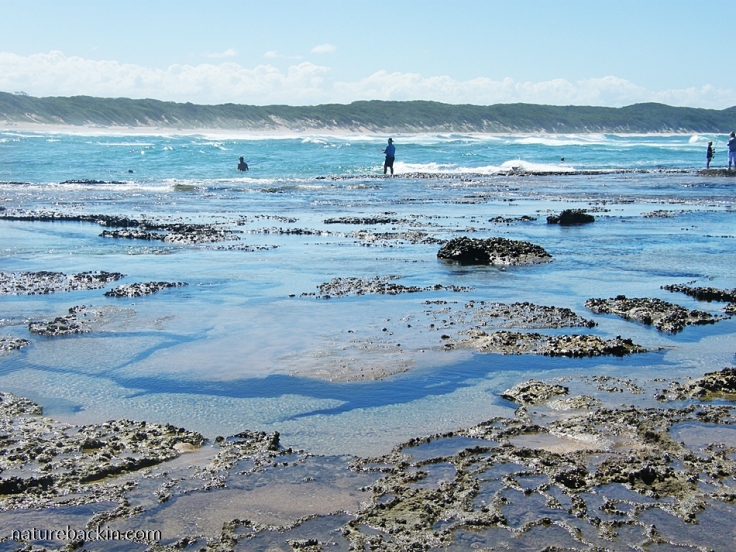 A view across Sodwana Bay from the rock pools off Jesser Point. Snorkelers and anglers stay close in near the rocks to stay out of the way of boats that launch parallel to the rock pools, which are exposed at low tide when this photo was taken

Although I enjoy snorkeling in the warm shallow waters at Jesser Point, when conditions are rough and underwater visibility is restricted another option is to amble along the edges of rock pools at low tide. 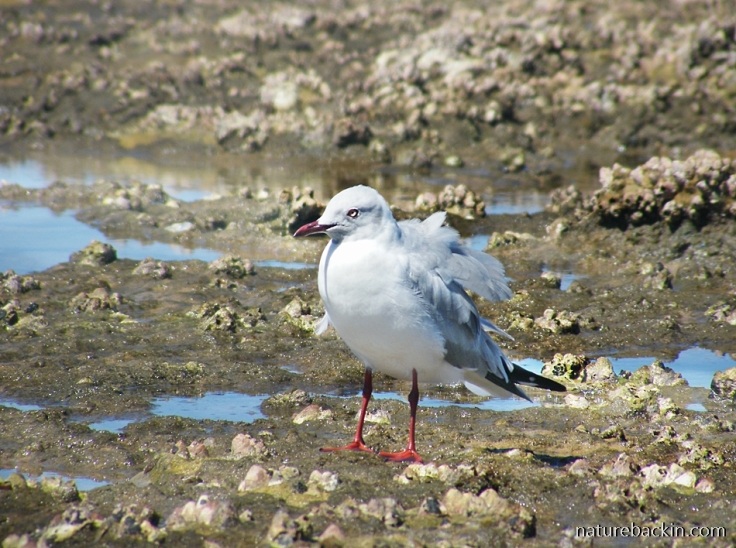 A Greyheaded Gull with feathers ruffled by the wind, visits the tidal pools at Sodwana Bay

Instead of watching the impressive waves and the distant horizon, when walking round the rock pools I watch my step. The rocks are encrusted with Volcano Barnacles – the name no doubt reflecting the cone shape of these small crustaceans

Barnacles are uncomfortably sharp to walk on, and so it is sensible to wear appropriate non-slip soft-soled shoes when walking around the tidal rock pools. Although the barnacles may appear to be dead exoskeletons, in fact they are very much alive.

Adult Volcano Barnacles are adapted to being encased in their shells that are permanently attached to the rocks; they may be exposed above the water at low tide and most are completely submerged at high tide. When exposed to the air they withdraw completely into their shells and by closing small plates at the opening of their shells they seal themselves in. When they are under water, these remarkable creatures open these plates so that they can extend their feathery modified legs through the apex of the shell to comb the water for suspended food particles that they retrieve to eat.

Although when walking slowly I saw much of interest in the rock pools, I found that by picking a pool and waiting quietly next to it I was able to watch small inhabitants emerge from hiding places to go about their daily tasks. Common among the small fish in the pools are blennies and rockhoppers. 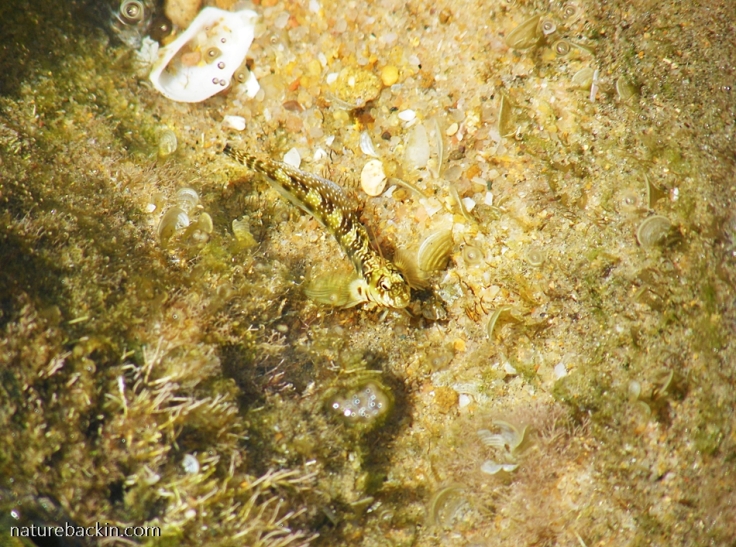 Waiting and watching allows one to see how animals move around as they seek or catch food, and perhaps one may even see unexpected interactions. I am aware that for many people exploring rock pools means prodding, poking, turning things over, picking creatures up or even catching them and placing them in containers so they can see them better or photograph them. I prefer less invasive forms of observation. Not only is there less potential to do actual harm, but one is able to observe natural behaviour rather than frightening creatures into hiding or stressing individuals that are handled or captured.

In general, codes of practice advise that visitors exploring rock pools should avoid treading on things that can be injured or damaged and recommend that people should not walk in or plunge into the small isolated rock pools. Creatures or plants that adhere to rocks or any other surfaces should not be removed.  For instance, starfish (or seastars) cling to rock surfaces using tiny suction feet, so it is sobering to note that picking up a starfish can rip these tiny suction cups right off.

Although it is preferable not to touch anything, if one insists, then do that with wet hands/fingers and do it gently. But even so, touching is best avoided. For example, touching creatures like anemones can cause them to release their defensive chemicals, which become so depleted that they may not be able to defend themselves from natural foes or capture prey.

If rocks are turned over this must be done carefully and a removed rock should be replaced in exactly the same place and orientation it was originally. Some creatures routinely return to precisely the same spot and turning over a rock can destroy habitat for small creatures and disrupt shelter, breeding, brooding eggs or young, and disturb feeding. If one insists on removing a creature from the water then it should be returned to the exact same spot as soon as possible. 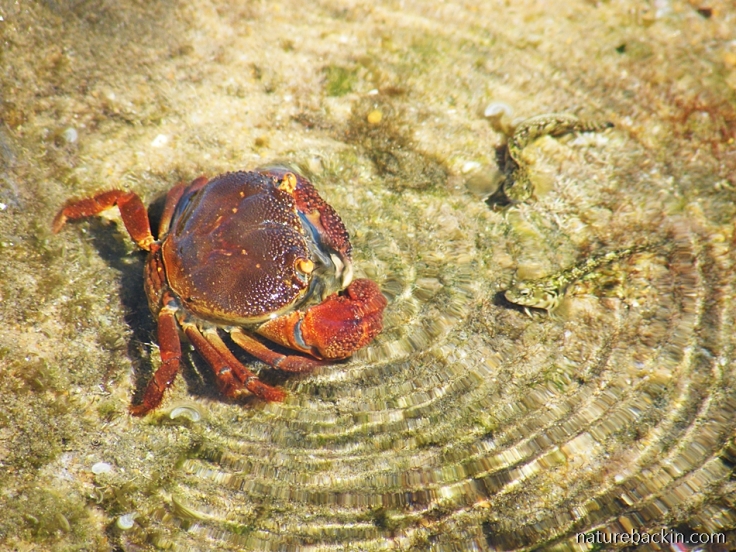 I watched this large crab apparently being observed by two rockskippers. I am not certain, but I think that the crab might be a xanthid crab, and if so its main prey animals are molluscs. With their powerful nippers they are able to crush the shells of many species of mollusc

Besides those who obtain subsistence foods from tidal pools, recreational fishing takes its toll on some forms of life in rock pools – for example some rock pool inhabitants are collected and used for bait. And also there are shell collectors who remove live shells and other specimens from tidal pools as well as from deeper waters. Most of the shells and all of the dehydrated creatures that are sold in beach and curio shops were taken alive from the sea.

Sadly, the removal of species and shells for the aquarium trade threatens many types of reef fish, corals and other animals, and entails a high mortality rate.

Besides these forms of utilization, visitors exploring the rock pools, especially in areas visited by lots of people and where curious visitors indulge in invasive practices, are also a threat to marine life. For more see here.

Submerged in tidal pools at Sodwana Bay are colonies of anemone-like zoanthids – well I think these are zoanthids rather than honeycomb coral. Can anyone advise? 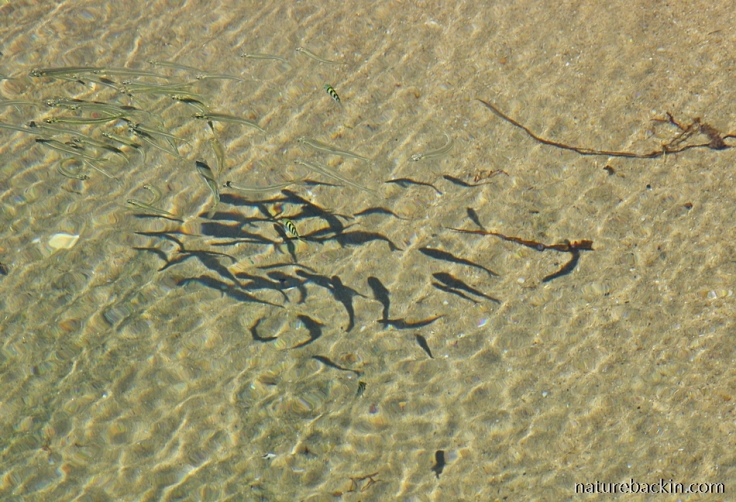 Scoured by sand and water, these smooth pebbles and fragments of shells dappled by light filtering through clear shallow water form a pleasing natural collage of colour and texture

Like polished metal, these organisms cover submerged rocks. I am not sure what they are and wonder if anyone can identify them?

I recall how on one visit when a friend and I were engrossed in watching minute life forms in the pools, people on the beach struggled to get our attention as they shouted to tell us to look up beyond the breakers where three whales were gently floating and blowing. The contrast in size of the spectacular whales we were ignoring compared to the tiny creatures we were focussing on made people laugh at us. I did not have my camera with me, but you get the idea I am sure. 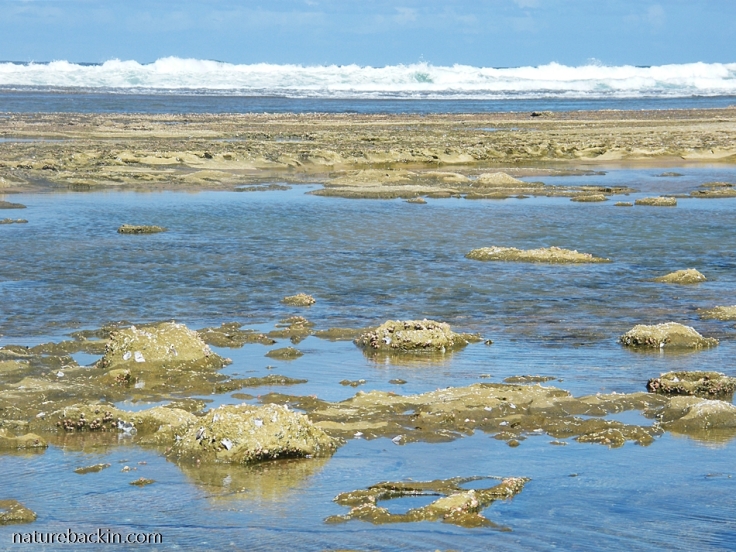 The tide is starting to come in and fill the pools. Time to depart to drier ground

While I was rock-pooling, scuba diving not far away out at sea, my husband took this photo of fish and coral at a very shallow reef. Many similar fish can also be seen by snorkelers in channels close to the shore 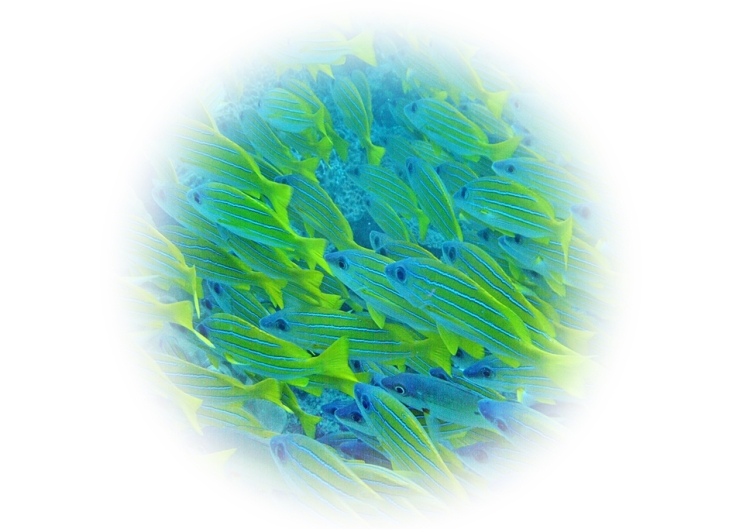