Agamas in the garden 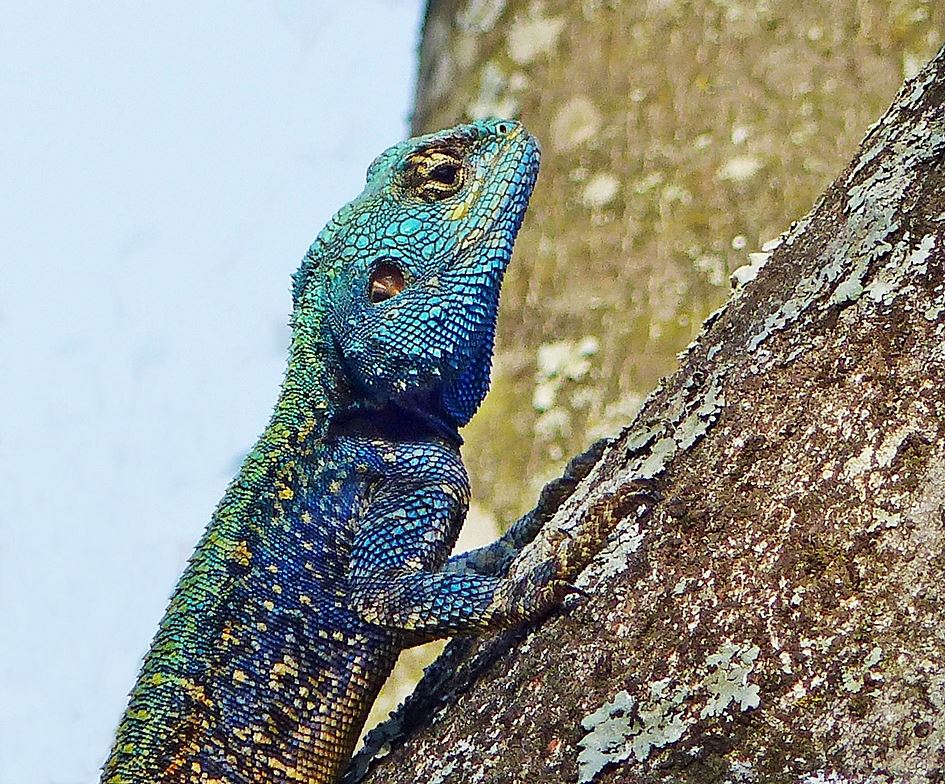 Southern Tree Agamas, commonly known as Blue-headed lizards, have adapted to suburban gardens, especially where there are suitable trees to sustain them. When breeding, the males are colourful and their vividly blue heads are most striking. Non-breeding males and females are considerably less conspicuous although their more understated scaly markings still render them handsome reptiles.

They are active during the day and at night they sleep in tree hollows or under loose bark. More mature trees provide better habitat for these arboreal lizards. Their scientific name is Acanthocercus atricollis. In South Africa they occur in the eastern regions.

If not molested they can become quite tame. Last year a female tree agama, living in a tree near a birdbath in our garden, would come around the trunk of “her” tree and watch from nearby as I filled the bird bath each morning, even seeming to listen when I got into the habit of greeting her. On one occasion my husband was doing some maintenance work under our car and turned around to find the agama on the ground next to his nearby tray of spanners watching him intently. Quite what attracted her to leave her usual arboreal abode to watch him from less than a metre away is hard to say.

Sadly, after being around for a few weeks, she disappeared not to be seen again. She may have moved on elsewhere or fallen victim to natural predators such as snakes, some species of birds and even monkeys. In addition, these lizards are vulnerable to domestic cats and dogs, as well as to human persecution, not to mention being run over when crossing a road.

Now that it is spring, the lizards are becoming more noticeable and there is a large male lizard in our garden now in his full breeding colours. A dominant territorial male usually has several females and juveniles in his territory. He uses head-bobbing displays both to attract mates and to warn off rival males. Females lay one clutch of eggs a year, averaging 10 eggs in each clutch.

Tree agamas are ambush foragers and they mostly eat insects, particularly ants, as well as beetles and grasshoppers. Most lizards do not eat ants as they are too acidic, so agamas are unusual in this respect.

These lizards are completely harmless to humans and let’s hope that most people with backyard gardens in regions where these agamas occur provide these engaging creatures with a safe haven and in so doing do not use pesticides. I am sad to see that they are caught for the pet trade. The trade in wild animals causes untold suffering. If you love ’em leave ’em and rather contribute to environmental conservation both at home and further afield. ★

14 thoughts on “Agamas in the garden”