I love those old and often grainy family photos. I have collections of old photos from both sides of my family – my mother’s family in England and my father’s family here in South Africa – dating back to the early 1900s.

Before he switched to colour slides (transparencies) my father’s photos were black and white prints. Below are two holiday snaps from about 1960.

Flying KLM, my father took the above photo in 1960 at the airport during a touch-down stopover en route from South Africa to Europe, possibly at Nairobi or Entebbe? We were about to walk out to the plane that can be seen parked out on the apron near the runway.

My mother with me (as a small child) climbing the stairs and about to board the plane after walking from the airport buildings. In those days airport security was nothing like it has become today. I looked up the number PH-DSB and discovered that the plane is a Douglas DC-7-C, a propeller-driven aircraft, acquired by KLM in 1957, which was still in use at the start of the jet age. KLM got its first jet-engine aircraft in 1960.

This photo of leaves backlit by the sun I conceptualised as a monochrome image – albeit at first in the monochrome shades of leafy green – but well-suited I thought to being altered to the shades of grey-through-to-black of black and white photography.

I am not sure if this works, but I used the shadows of leaves to create a kind of rosette effect in this tightly cropped image also of backlit leaves of the powder-puff tree (Barringtonia racemosa).

I photographed this frond of a maidenhair fern in a ceramic pot on our front deck. I have a kind of fondness for “unartful cropping” as it provides the sense of a random snapshot cut out from the broader context, if that makes any sense?

The frond of a fern silhouetted against a wall as it extends down from a hanging pot. It was only after I took the photo that I noticed two small clay nests, each about the size of a marble, of a potter wasp at the base of the frond.

Also photographed on our front deck are shadows of leaves of a neighbouring potted aloe on a clay pot. I like the curves and the play of light.

In this photo stems, flower- and seed-heads are illuminated by late afternoon sun. I increased the contrast to create a stark almost abstract effect. The grass-like leaves of the common rush (Juncus effusus) are used traditionally to weave into sleeping mats and baskets.

I am not sure if this image works, but I used again what I call “unartful cropping” to help move the eye around the image as it seeks to see what lies outside the frame. The small leaves are fresh shoots growing from the woody stem of a wild jasmine (Jasminum angulare). One thing is for sure, shooting for black and white photographs is a lot more demanding than working with colour.

The leaves of a maidenhair fern are spangled with drops of rain. The image could be sharper and it requires a greater depth of field, but there is something I quite like about this photo.

The rounded leaves of this succulent plant, one of the Cotyledons, contrast with the wild grasses that surround it. The lighting is a bit flat and the end result indicates that I “should try harder” as my school reports used to say.

The spiky leaves of an aloe are in stark contrast with the rounded leaves in the previous photo. I upped the intensity of the contrast for this photo to better show off the thorns and the pale markings on the leaves of this Mkondeni aloe (Aloe pruinosa).

Leaving this image dark creates a sombre effect looking up to the canopy of the tall indigenous trees that grow in the buffer zone between our garden and the commercial plantation. Sombre is what we are feeling right now as South Africa’s Covid-19 infection rate remains high. However, there are signs that infection rates just might be starting to slow, in some provinces in the country at least.

These tree roots and fallen leaves are naturally almost monochromatic with just a few hints and touches of green adding colour. Green is such a hopeful colour, and hope is sorely needed. 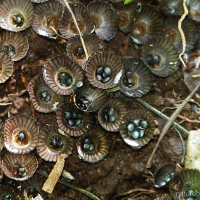