The tale of our Banded Tilapia: Freshwater fish in our garden pond

Don’t get exotic goldfish for your pond, get indigenous Banded Tilapia, was the advice. And so we did.

We tracked down a small business on a smallholding that bred goldfish for the pet trade, and also bred Banded Tilapia (Tilapia sparrmanii) on the side. We went home with a plastic bag half-filled with pond water in which swam 12 tiny Banded Tilapia small fry – each fish about 1 cm long. We floated the bag, knotted at the top, on the surface of our pond so that the temperature of the water in the bag would equalise with the temperature of the water in the pond. After several hours, we undid the knot and released the tiny fish into the pond, and they quickly disappeared under the water plants.

For weeks we would visit the pond hoping to spot one of the tiny fish and didn’t see any. They must all have died, we thought, until eventually one day we saw one, and then another and another. By now the tiny fish had grown to about 3 cm in length. So, our pond had a population of healthy little fish after all!

We had decided to get the fish for the pond in the hope that they would eat algae and also mosquito larvae. Banded Tilapia are mostly vegetarian and they are often used as a biological control of invasive water plants such as duck weed, but the juveniles also eat small crustaceans and midge larvae, and we think that they also eat mosquito larvae  (the larger Nile Tilapia definitely do).

Banded Tilapia are beautiful little fish, with their colour varying with the seasons

One would think that Banded Tilapia are perfectly suited to garden ponds as they are relatively small. In ideal conditions they can grow to a maximum of about 23 cm in length. The fish in our pond were really good at eating algae growing on underwater surfaces, and they also nibbled on many of the water plants too, as well as some plants growing outside the pond that trailed into the water. 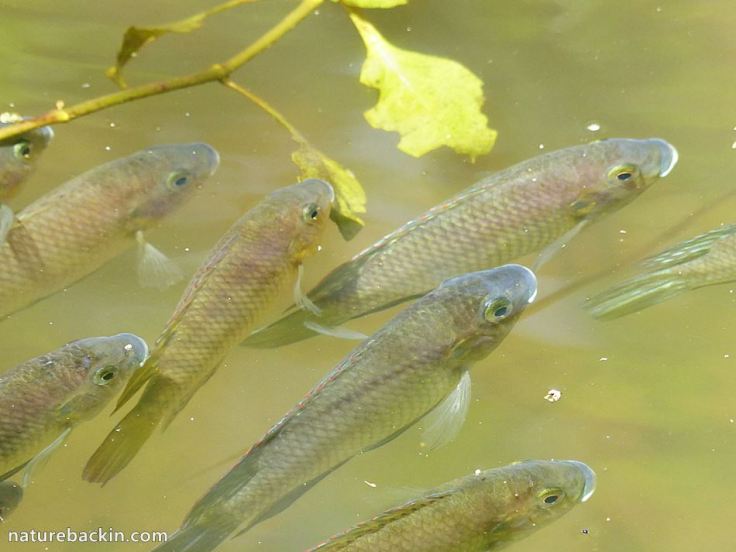 When we discovered that the Banded Tilapia enjoyed a forest margin plant, Clinging Aneilema (Aneilema aequinoctiale), when it trailed into the pond, we would sometimes float clippings of this plant on the surface of the water for them to nibble on

The spines in the dorsal fins of the Banded Tilapia can be quite sharp. At times the fins have an iridescent green sheen as can be seen in this photo

What we didn’t know about Banded Tilapia is that they are extraordinarily prolific breeders. Like most fish in the cichlid family, Banded Tilapia are very good parents. In the wild they undertake seasonal upstream migrations and breed before and during these migrations. In our pond, they seemed to breed often during the summer, being relatively dormant during the winter when they would seemingly hibernate in the deep water, often under rocky shelters, at the bottom of the pond.

When breeding, the bands or stripes on both the male and the female become darker. The male builds a nest in floating vegetation to which he attracts a potential mate. She lays her eggs in the nest and the male then fertilises the eggs. The pair of them guard the nest and also the small fry once they have hatched. 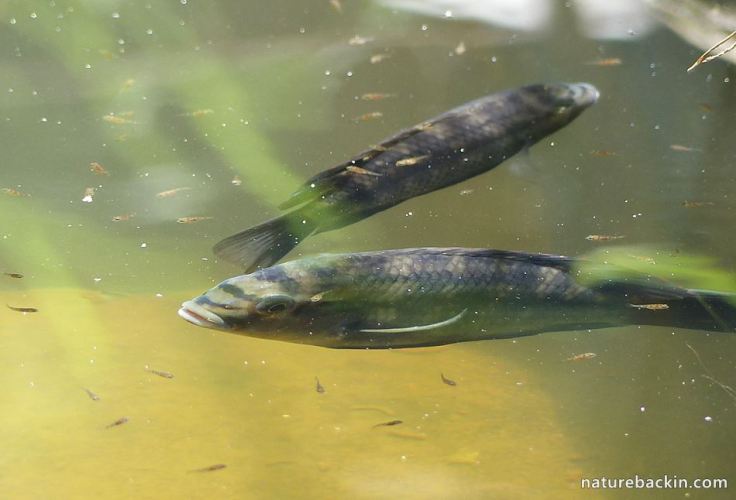 A breeding pair of Banded Tilapia in our pond surrounded by their very tiny babies that they guard tenaciously. The female is slightly larger than the male. Some cichlids are mouth brooders. The Banded Tilapia are not, but they may use their mouths to move their young to a different site while they are hatching 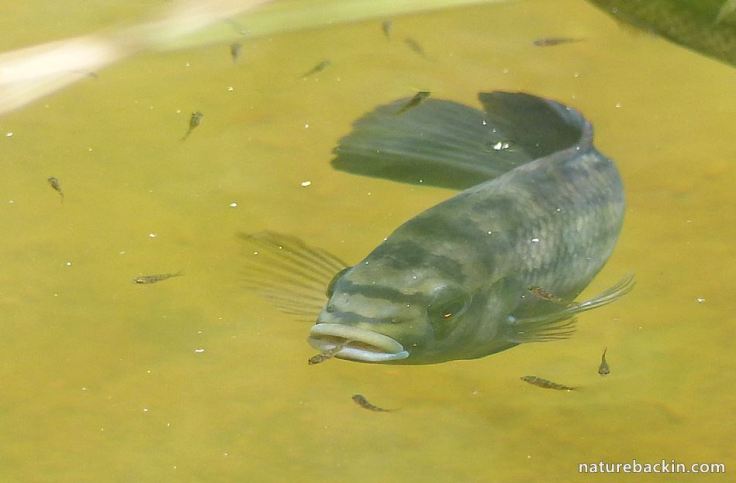 So, being such good parents and with few predators of fish in our pond, our 12 tilapia multiplied and multiplied. After a few years our initial pond sprung a leak (more on this in a future post) and we built a small second interlinked dormitory pond where we could place the fish while the first pond was repaired. To move the fish to the second pond we caught them by hand using small homemade fishing nets. It was while catching and moving the fish that we discovered how spiny their dorsal fins are!

As we caught and moved the fish we tried to keep count and we lost count once we got to about 200! This was far too many fish for the small pond. We tried giving some away to friends with ponds, but that did not reduce the numbers significantly. The high number of fish did mean that some of water plants were completely eaten, with some even being pulled out of their pots, but the main adverse result was that the water became too nutrient rich with so many fish excreting their waste into the pond. The end result was algae overload. We also found that the metal in the pond pump was constantly corroding indicating also that the fish waste was making the water very acidic. 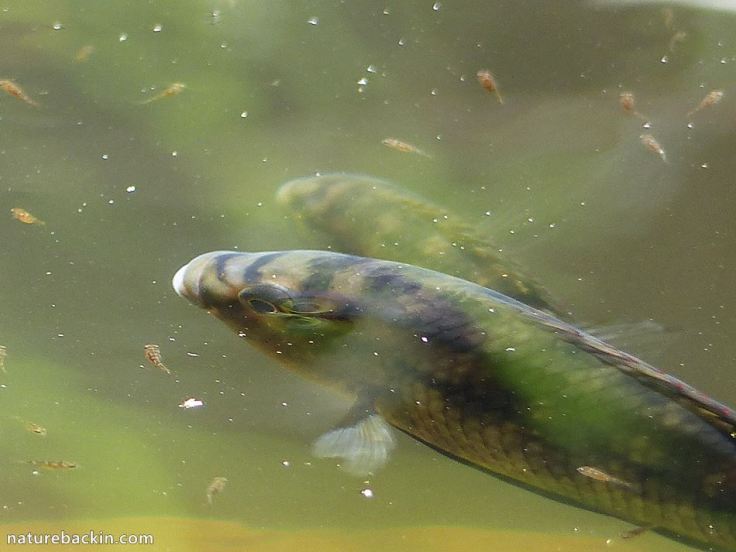 So in the end we decided that it would be best and perhaps kindest to release the fish into the wild. We contacted a local conservationist with specialist knowledge of indigenous freshwater fish for advice. He said we should not release them into a dam as they breed so prolifically; rather release them into one of the nearby tributaries leading to the main river in the region. So we scouted around for an area that did not seem too polluted, and in an assortment of buckets and plastic bags took our fish there and released them into the stream. They swam off at speed without a backward glance, perhaps better off outside the confines of the pond. I have to say though that we do miss them, although the quality of the pond water is much better off without them.

26 thoughts on “The tale of our Banded Tilapia: Freshwater fish in our garden pond” 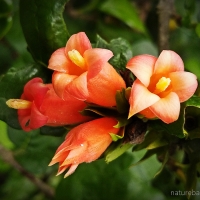