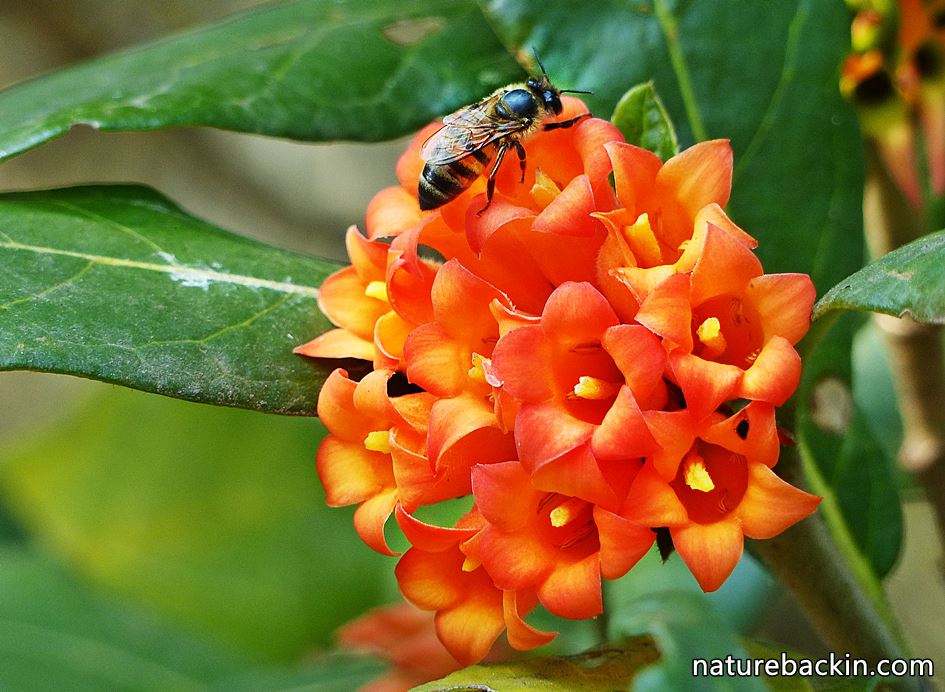 I set myself a personal photo challenge, to photograph only spring flowers in the garden in a short space of time. So, I had to capture what were there, even those flowers that were not “at their best”.

This is a small selection of my crop of photos taken in half an hour one morning last week, celebrating spring and the diversity of our local plants. As these spring flowers in our garden show, growing indigenous plants does not mean one has to forego flowers and colour, as some people still seem to believe.

For example, the vibrant Wild Pomegranate (Burchellia bubaline), in the photo above, is an easy-to-grow shrub that erupts into masses of small posies of trumpet-shaped flowers in the very early spring. It flowers throughout the summer too, attracting honeybees and nectar-seeking birds, especially sunbirds. 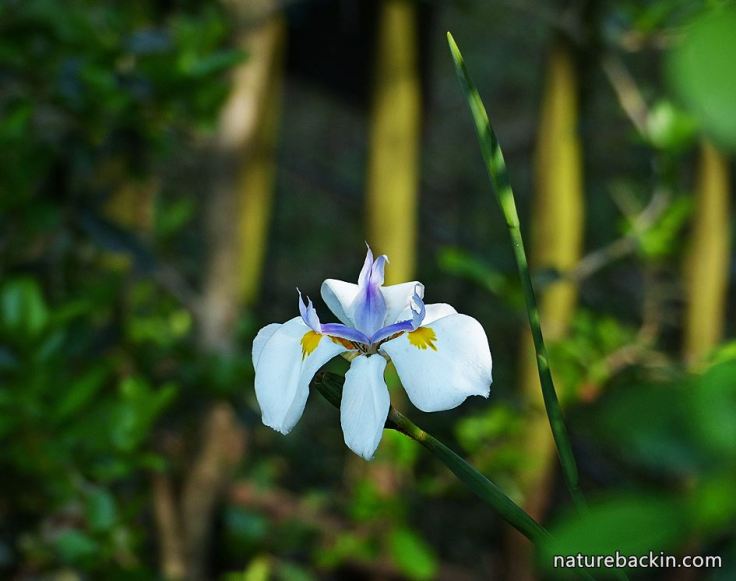 This was the first flower I captured on camera that morning. It is a popular in home gardens and is often used in massed plantings around carparks in industrial areas and at shopping malls, evidence that it has low water requirements and is easy to grow. Known as the Large Wild Iris and sometimes as the Fairy Iris, its botanical name is Dietes grandiflora and it is indigenous to regions in the southern and eastern parts of South Africa. Established plants burst into masses of flowers after rain. 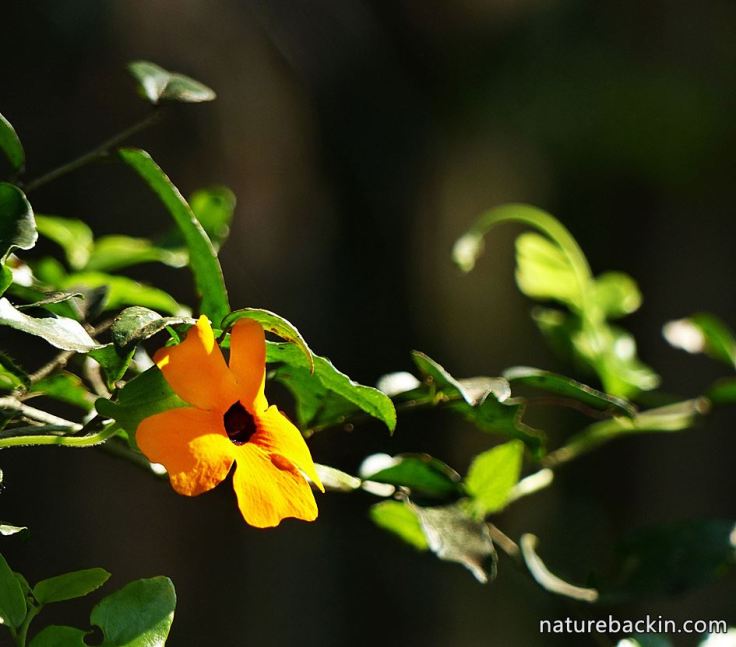 The Black-eyed Susan (Thunbergia alata) is a small creeper that I have loved since I was a child. Back then we named a recued orange-and-black (tortoiseshell) cat ‘Susan’, because her colours reminded us of the flower. As you can see it is very different from the North American plant also known as a Black-eyed Susan. It is fast growing and we leave it to do its own thing, apart from occasionally cutting it back or even pulling up some of the many self-seeded seedlings. In Africa it occurs from the tropics southwards to South Africa, and grows naturally in forest margins. It has been widely cultivated in gardens for a long time. Who could not enjoy its cheerful presence? 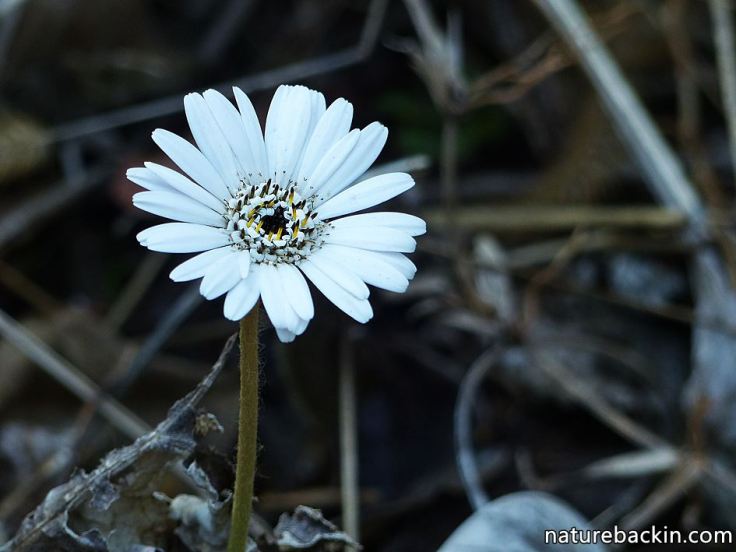 What is it that makes daisies so appealing? Perhaps in their relative simplicity we perceive the essence of what it is to be a flower? This Gerbera ambigua is an early bloomer in our mini-grassland that was still dry after the long winter. (Since then we have had lots of rain!) Its attractive pink underside adds to its charm. It is a wild grassland plant, variable in both colour and leaf shape, and occurs across Africa. Cultivated hybrids of Gerbera species are used in the cut-flower industry worldwide. 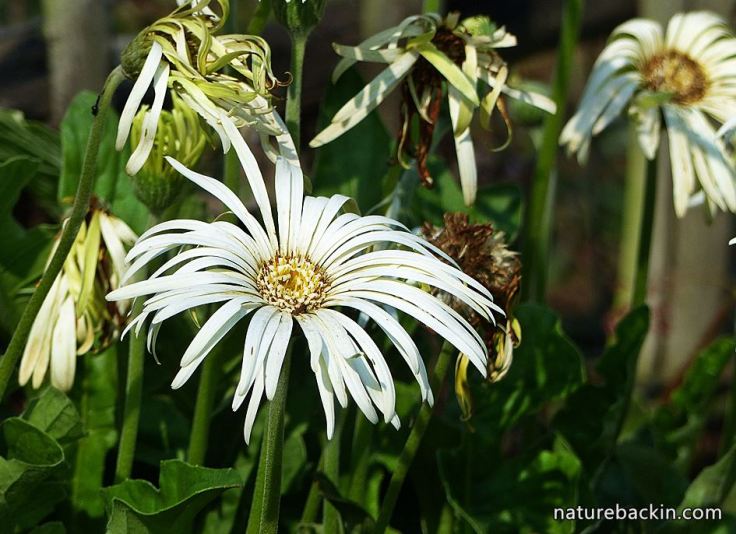 Looking somewhat blousy by comparison, this is a hybrid of the Barberton Daisy (Gerbera jamesonii). On the morning I took these photos most of the flowers were” past their best” with some already going to seed.

Talking of special hybrids and cultivars, although they have their place in the garden it is important to also plant indigenous (native) plants in their wild form; some hybrids and cultivars may differ from the original plants they were developed from in ways that can effect pollinators. For example, although they attract pollinators, some hybrids and cultivars may have lower quantities of nectar and so, for example, a pollinating bird may have to work much harder to gain the same nutrition. Another variation that may have an impact on pollinators is that flowering periods may be different making such plants out of sync with the requirements of some pollinators. Some plants specifically bred to have double-petalled flowers may lack nectar and pollen or the nectar is inaccessible to pollinators.

On her blog The Humane Gardener, Nancy Lawson features an interesting discussion on research done on this subject by ecological landscape designer Annie White. See Flower power: A Q&A with Annie White 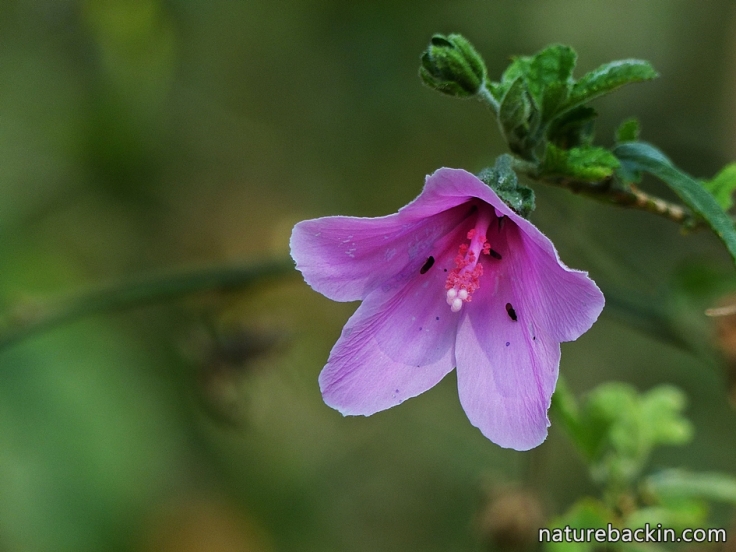 Decorated with small beetles, this lovely Hibiscus pedunculatus, also known as the Forest Pink Hibiscus, droops attractively in the morning light. Interestingly, its tough inner bark is used as twine in hut building.

The blue flowers of the Plumbago auriculata (starting to go to seed) and Freylinea tropica. Both are hardy  shrubby plants

The Plumbago auriculata occurs naturally over many regions in southern Africa and is now a popular garden plant in many countries of the world. It attracts pollinators, including butterflies, and its dense shrubby growth makes it a good plant for a dense “secret corner” providing shelter to birds and other creatures.

Freylinea tropica occurs naturally only in very specific high altitude areas in Limpopo Province in South Africa and in mountainous regions in Zimbabwe. However, it is widely used as a screening plant in gardens and is attractive to pollinators including sunbirds and butterflies. 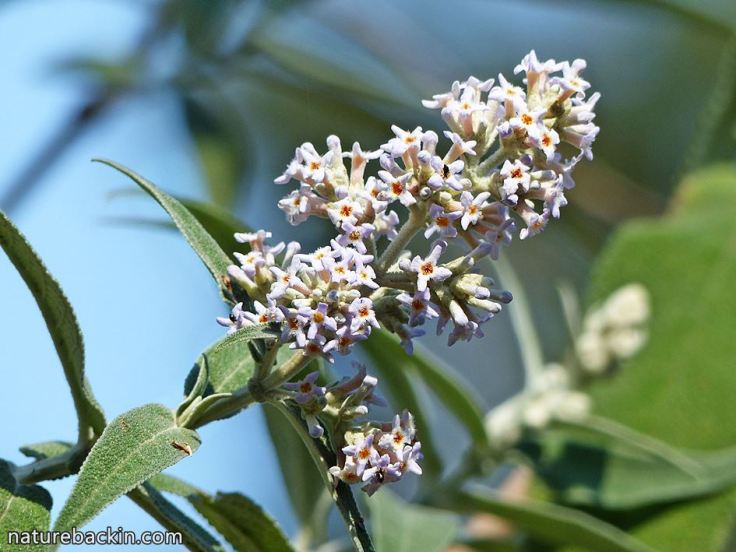 The heady scent of flowers of the Sagewood, Buddleja salviifolia, is redolent of spring. Another plant that occurs mostly in the southern and eastern parts of South Africa, it also occurs up through Africa as far north as Tanzania. It is a plant found in evergreen forests, along streams and on mountain slopes. It attracts many insects and butterflies, and consequently also insectivorous birds. It is a drought-resistant shrubby tree, and the oldest one in our garden is about 3 metres tall.

This orange-plumed flower of the well-known Strelitzia reginae with the common names the Bird-of-Paradise or Crane Flower, is starting to mature. A grassland plant of the eastern seaboard of South Africa it grows to a height of about 1.2 metres. The lesser known Strelitzia nicolai, with its white petalled flowers, grows to a relatively massive 8 metres in height, injecting a sense of the tropics into the garden. It is also known as the Natal Wild Banana, and like the Strelizia reginae, it attracts many nectar- and pollen-seeking birds and insects. Vervet monkeys, often with the air of seasoned connoisours,  enjoy eating the soft parts of the flowers and also the seeds. 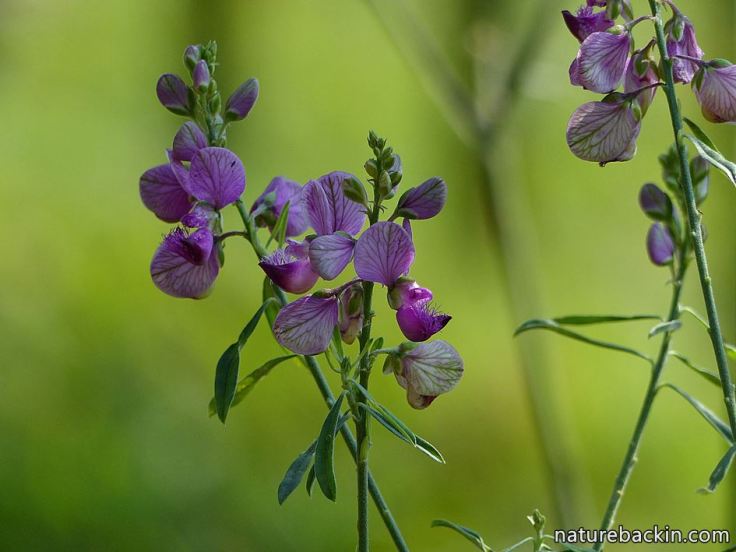 The beautiful white petals contrasting with the golden stamens of the African Dog Rose, Xylotheca kraussiana

The small and dainty Pelargonium tongaense from north-eastern Zululand, and from the Eastern Cape a white flowered Pelargonium I have not identified

The first wild Pelargonium collected in the Cape in South Africa to be taken to Europe was in 1631. It was a tuberous-rooted plant that survived the journey back on a ship. In the 1670s serious collecting was undertaken and seed was sent to Holland where Pelargonium species where propagated. In subsequent decades more South African Pelargonium species were collected and propagated in Holland and England. In the 18th and 19th century many more plants were collected, propagated and hybridised, becoming popular as garden and pot plants. These plants were known by the generic name “geranium”, though in fact both the genus Geranium and the genus Pelargonium are in the family Geraniaceae, and plants from the two different genera should in fact be distinguished as such. 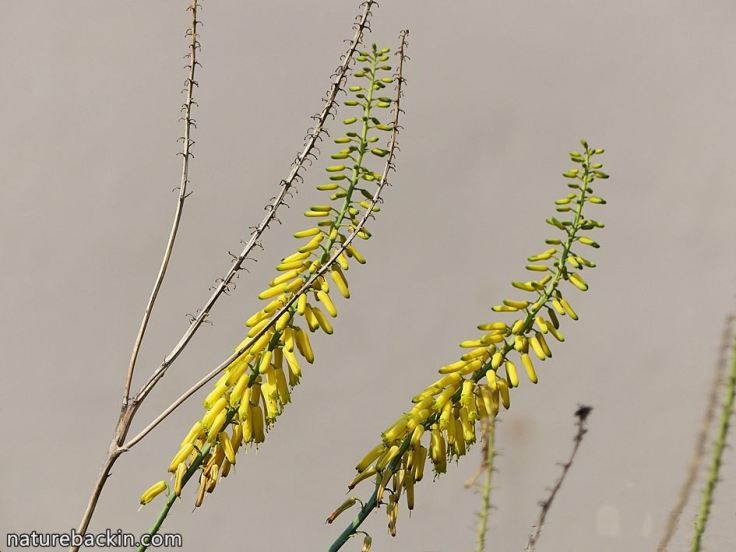 The rambling Aloe tenuior, also known as the Fence Aloe or Kraal Aloe, is perhaps an appropriate plant to end off our ramble round the spring garden.

P.S. In recent blog posts, I have been complaining about drought, but in the past week we have had very good rains. However, what were not needed were the frightening and damaging floods that hit the coastal city of Durban and other parts of KwaZulu-Natal on Tuesday, 10 October. Roofs were ripped off hospitals and other buildings and roads, schools and homes were flooded, ships ran aground in the harbour. Sadly, eight people have been confirmed to have died as a result of the storms and the floods.