Aloes and gardens, Samangos and forests

Flowering aloes attract many birds and insects, and in the case of the Ashburton Aloe Festival, many visitors too are attracted to this annual event held by the Lower Mpushini Valley Conservancy.

In the previous post  I highlighted some of this year’s events, and there is still more I want to tell you about. The event is spread over several venues in the conservancy area. Travelling along the dirt roads in the area, in addition to the aloes we saw some Nyala antelope walking through the dry and dusty roadside vegetation, and we also spotted a Long-crested Eagle.

We saw this Long-crested Eagle standing on top of a tall pole by the roadside. Long-crested Eagles are known as perch hunters, and individuals are often seen perching conspicuously near roadsides in many regions in KwaZulu-Natal

We attended a talk on a newly launched Samango Monkey Research project presented by primate naturalist, Karin Saks (see also the Darwin Primate Group). Karin is working together with FREEME KZN Wildlife Rehabilitation Centre in conjunction with African Insight, hosting visiting groups of researchers and students who, under the guidance of specialist primatologists, will assist in gathering data to contribute to ongoing research intended to inform the conservation and management of Samango Monkeys, specifically in the KwaZulu-Natal Midlands, and to contribute to a better understanding of the status of the forest fragments in which they manage to survive.

Habitat loss and fragmentation is the biggest threat to primates worldwide. The status of over half of the world’s primate species is vulnerable, endangered or critically endangered.  The primarily fruit-eating Samango Monkey is South Africa’s only exclusively forest-dwelling primate.

Forests form the smallest biome (ecological community of plants and animals) in South Africa (covering only about 0.1% of the country). Even remaining forest areas are under pressure from forest utilisation and from commercial plantations, farming, and other forms of land use. I took this photo in the KwaZulu-Natal Midlands.

In other parts of Africa, Samangos are named Sykes or Blue Monkeys. In Southern Africa there are three subspecies, each limited to specific regions. The subspecies (Cercopithecus mitis labiatus) that occurs in the Natal Midlands and south-westwards down to forested areas in the Eastern Cape is found nowhere else. Its population has declined by over 30% in the last three decades and this subspecies is classified as endangered. The future of Samango monkeys in this region is far from certain. 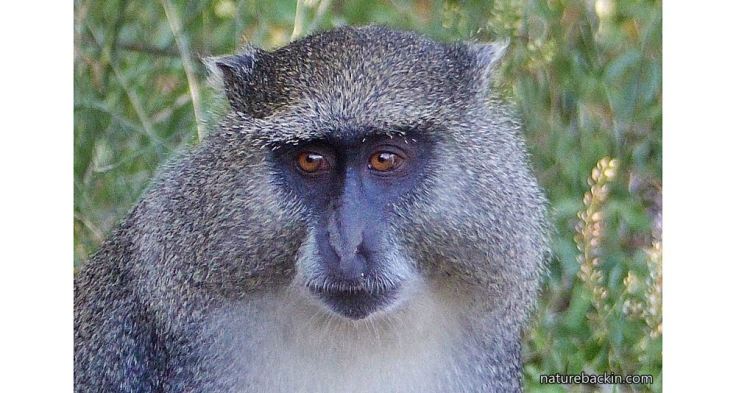 I photographed this Samango Monkey at Lake St Lucia Estuary in northern KwaZulu-Natal. Although similar, Samangos that occur in north-eastern  Zululand are a different subspecies to those occurring in the Midlands and the Eastern Cape

Samangos live in groups of females who spend their lifetimes in their home range, together with a dominant breeding male whose tenure may be anything from a few months to a few years. Mothers bear single offspring and the young are nursed until they are two years old. Females remain with the troop, but when young males reach maturity, either on their own or in small bachelor groups of two or three, they leave their maternal troop in search of other groups of females to join. Obviously, as forest patches become widely separated, this dispersal is not possible, threatening the genetic health and viability of Samango populations.

The goal of the Samango Monkey Research Project Midlands KZN is a proper assessment of the distribution and habitat of Samangos in the region, as well as assessing how human intervention has impacted on troops.  Findings will be shared with other Samango research projects in the country in order to gain a broad perspective. Information will be gathered using non-invasive methods, including using field cameras to help identify individuals and record interactions; using faecal samples to learn more about their diet and genetics; and ongoing observation of monkey behaviour, troop structure and their behavioural relationship to other primate species. Focal samples and surveys of residents in the area will also be used.

In the Midlands area, some observations of single Samangos living with Vervet Monkeys (a different species) have been recorded. Interactions between the species will be of interest to researchers. It is known that under specific conditions primates of different species may interbreed. Cases of Samangos (Sykes monkeys) and Vervets interbreeding have been recorded in East Africa, producing fertile hybrid offspring. See here.

At least four “blonde” Samango Monkeys have been recorded at Cape Vidal (near Lake St Lucia Estuary on the Zululand coast). Some researchers were of the view that they might be Samango-Vervet hybrids (as some have a blue scrotum characteristic only of Vervets), but their  blonde-to-reddish colouring is more likely because of a genetic mutation. For more information click here. I photographed this healthy individual foraging in proximity to other troop members at Cape Vidal in January 2016

An important aspect of primates, not generally known, is their critical role in seed dispersal. In the case of the predominantly fruit-eating forest-dwelling Samangos this role is crucial and it is possible that some plants are dependent on Samangos for their dispersal. Investigating this aspect is an important part of the KZN Midlands Samango project research.

For their own continued existence, natural forests depend on the survival of many species in the complex network of forest ecology. In the areas where Samango Monkeys occur, their survival and their role in seed dispersal is important for forest health and biodiversity. An important goal of the Samango Monkey Research Project Midlands KZN is to educate the broader public on the importance of biodiversity for a healthy environment and consequently for our own health and survival in the long term.

In her talk, Karin made the observation that once humans became farmers, our relationship with nature altered to become more of a master-slave association as we gradually lost our physical, emotional, intellectual and spiritual connection with the natural environment and became more separated from nature’s processes. Hunter-gatherer cultures lived with a constant awareness that taking from the earth affects our own existence  — another example of how we need to let nature back in. For more on the project see here.

The Lower Mpushini Valley Conservancy is all about conserving biodiversity, using its flagship Aloe ferox and the annual aloe festival to generate interest and publicise its work.

The Hackland Aloe Garden, surrounded by sugarcane fields, used to be a renowned rose garden. But tired of battling insects and providing for the high water requirements of roses, and under the influence of her husband, Rick, who already loved aloes, Femma Hackland agreed to convert their garden to one that predominantly features aloes. Initially she missed the roses and was not all that fond of aloes, but now she is a true convert and adores them.

Her garden is beautifully landscaped and so even when the aloes are not in flower the plants provide powerful structural interest. However, in June and July it is the flowers that most draw the eye, bringing brilliant colour to the dry winter landscape. Amazingly, the conversion of Femma’s rose garden to this well-established aloe garden commenced only in 2012.

Many of the aloes in the Hackland’s garden came from the Rocky Wonder Aloe Nursery in the Lower Mpushini Valley Conservancy, which also participates in the aloe festival. Aloes hybridise in the wild, and several hybrid varieties are available from nurseries

A female Malachite Sunbird attracted to the Hackland’s garden to feed on the nectar-rich aloe flowers. It makes sense to plant aloes that occur naturally in the region, so in KwaZulu-Natal aloes from summer rainfall areas do best, and in the Western Cape rather plant aloes from winter rainfall areas. Aloes require very little water and flourish without needing artificial watering

The Hackland’s colourful aloe garden and the view of the agricultural lands beyond. Most aloes prefer sunshine to shade, but some are adapted to shadier habitats

We are grateful to the Lower Mpushini Valley Conservancy and all the participants and volunteers for making the annual festival possible and so interesting, and for showcasing the valley’s natural diversity. 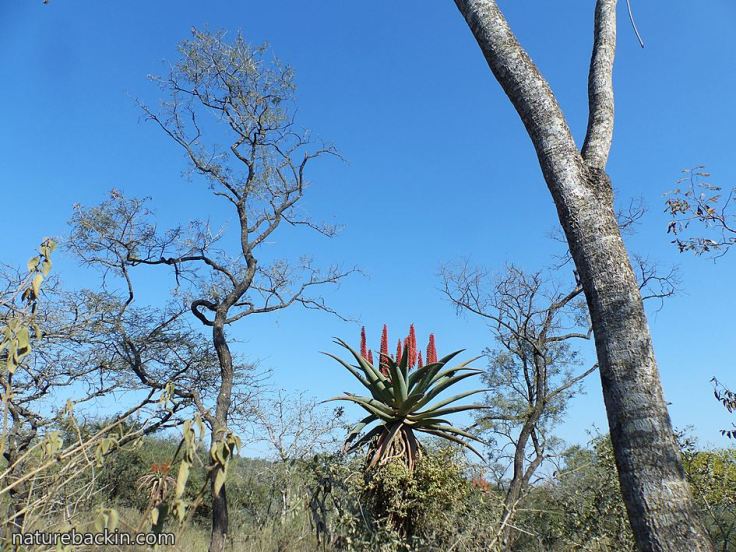 We were inspired enough to buy a small Aloe ferox. Aloes need well drained rather than rich soil, so before planting it might be necessary to add some washed river sand to the planting hole. Perhaps I’ll keep you updated on its progress

To see the Hackland Aloe Garden:

Contact Femma at 083 636 0881 or by email at femma@pmbnet.co.za. The garden can be viewed by appointment. Gardening groups are welcome. The Hackland’s Aloe Garden will be open on the 7 and 8 October 2017 as part of the Stihl Open Gardens.

For a book about Karin Saks’ work fostering orphaned baboons and interacting with wild baboon troops: Van Riel, F. 2003. Life with Darwin and Other Baboons. Penguin Random House (South Africa). [Now available as an ebook from the publisher.] 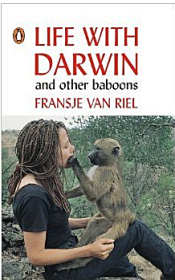 9 thoughts on “Aloes and gardens, Samangos and forests” 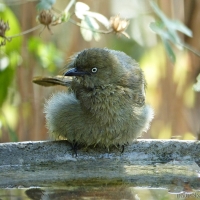 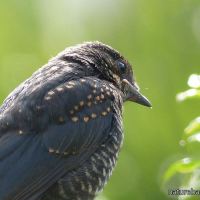