How the colourful koppie foam grasshopper sheds its skin

This summer I had the chance to watch nymphs of the koppie foam grasshoppers moulting their exoskeletons. I have been keeping an eye on the juvenile grasshoppers as they congregated in greater numbers this season than usual.

The development of these grasshoppers is a surprisingly lengthy process. Hatching from the eggs, the nymphs (also known as hoppers) emerge in the form of miniature adults, but without wings or reproductive organs. As in all grasshoppers their metamorphosis has only three stages – egg, nymph and adult –  unlike the majority of insect species that have four stages – egg, larva, pupa, and adult – for example as in butterflies.

Two species of foam grasshoppers conspicuously occur in our garden – the colourful koppie foam grasshopper (Dictyophorus spumans) and the mostly green and black leprous grasshopper (Phymateous leprosus), both members of the Pyrgomorphidae family. Although from different genera these two species have much in common.

These, the smallest juvenile grasshoppers I have photographed in our garden, are koppie foam grasshopper nymphs gathered together on the shade cloth on one side of our vegetable garden

The nymphs of most foam grasshoppers are known to congregate in quite dense aggregations.  As they grow they need to moult and shed the previous exoskeleton – in effect their tough exterior skin – in order to accommodate the changes that develop. The different forms at each stage of growth are known as instars. In one study of foam grasshoppers that focussed on the leprous grasshopper, it was observed that a nymph of these grasshoppers moults 10 times, and so it has 10 instars before becoming an adult. The development of the nymph through these 10 juvenile stages takes about a year and in its adult form it lives for around another 8 months (Köhler et al. 2008).

Foam grasshoppers are so named because they are able to produce a toxic foamy secretion from their thoracic joints when threatened. The foam is so foul-smelling and distasteful that it puts off any creature threatening it. Most foam grasshoppers have conspicuous colours or markings that act as a reminder or warning to predators. The warning must be heeded as eating a toxic foam grasshopper is fatal.

As they develop through successive moults, the instars of the koppie foam grasshopper (Dictyophorus spumans) become more colourful

These grasshoppers eat a wide variety of plants. When they were very young I observed them eating several types of grasses as well as other plants in the garden

It is thought that the toxicity of the foam grasshoppers derives from the poisonous plants that they eat. Although foam grasshoppers are often referred to as milkweed locusts, their diet extends beyond eating milkweeds. (Locusts, by the way, are grasshoppers, with their distinguishing feature being that in response to certain environmental conditions they can form large aggregations resulting in flying swarms of locusts. Otherwise they can live a largely solitary lifestyle much like any other grasshopper.)

Poisonous plants that I observed the koppie foam grasshoppers eating in our garden included arum lilies (Zantedeschia Aethiopica) and also Inanda lilies (Cyrtanthus sanguineus) that they ate right down into the bulb. Fortunately the Inanda lilies are in pots so after removing the grasshoppers, I moved the pots to a more secluded space where all the plants regenerated. The arum lilies were robust enough to survive the grasshoppers feeding on their leaves.

The nymphs also were attracted to eating leaves of the non-indigenous Cape gooseberry (Physalis peruviana) bush in our vegetable garden. It is a member of the deadly nightshade family and the leaves and unripe fruit are toxic.

This summer, because of the extraordinary number of koppie foam grasshoppers in the garden, wearing gloves, my husband carefully placed as many he could find into a sack and relocated them. In previous years we have just left them to do their thing.

Our property backs onto a buffer area between us and an exotic plantation. This area is dense with invasive alien plants. We have cleared a strip and planted indigenous plants, but below that the dense thicket serves to protect small wild animals and birds and provide them with a place to hide from hunting dogs and other threats.

It was here where the grasshoppers were released and they proceeded to make themselves at home, munching on exotic Lantana camara and Caesalpinia decapetala (known as Mauritius thorn)

When I saw the nymphs with wing buds large enough to look like rudimentary wings I was thinking that by the time they reached the adult stage they would fly away, but then I learnt that in fact foam koppie grasshoppers are among the species of grasshopper where the adults remain flightless. In fact they only develop short forewings (tegmina) that in other grasshoppers cover the hind flight wings and koppie foam grasshoppers never grow hind flight wings at all.

I was very excited when I first watched a foam koppie grasshopper shedding its exoskeleton. It is a very slow and apparently arduous process. The first moults that I saw were on dull days and/or windy days and/or obscured by foliage and did not make for successful photographs. Eventually I did see a moult that was easier to photograph.

The moult starts with the face and head of the grasshopper emerging out of a split at the mouth parts of the exoskeleton. The yellow knob at the top of the head and the eyes are soon visible as they protrude from the old exoskeleton as are the “shoulders” or rather the neck shield (pronotum). Next the rest of the head and the antennae (that are folded flat under its front) emerge. 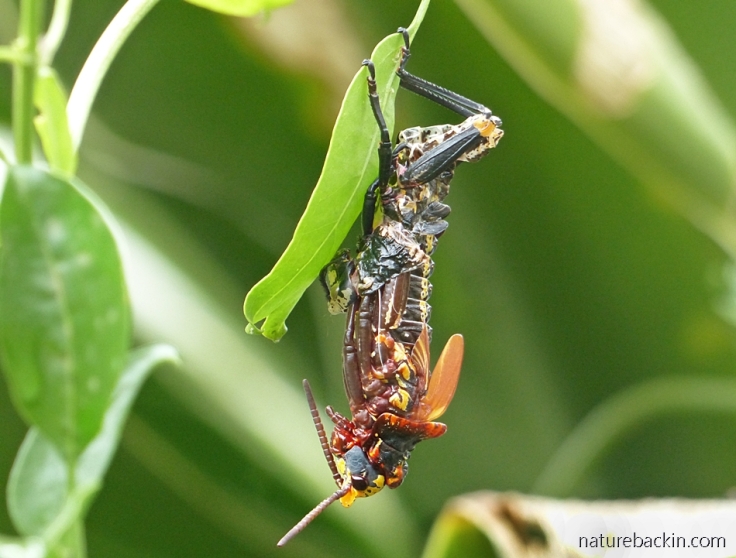 Considerable progress has been made, and the grasshopper waves its antennae as the legs start to be freed very slowly from the exoskeleton

The hind legs are free and the end of the abdomen has yet to be released from the old exoskeleton. The process is a bit like slowly oozing out of a very tight sleeping bag. The moment that the abdomen popped out of the old skin is captured in the video below

At last! The grasshopper has successfully escaped from its previous skin. Now it has to be careful while it waits for its new exoskeleton to finish hardening

After 20 minutes since the last photo was taken, the grasshopper is ready to climb away from where it moulted to a more sheltered spot. It is over an hour and a quarter since it first began moulting at the start of this sequence of photographs

After the moulting stage that I observed, this grasshopper is fully recovered from the process

So I continued to keep an eye on the grasshoppers. I did not see any more moults, but I started seeing grasshoppers in their adult colours. In this photo, the grasshopper at the top is in the same nymphal form as the one I photographed moulting. The one below has grown its forewings and displays its adult colours

I did not see any moults into the adult form and neither did I find any more exoskeletons. However, it is unlikely that I photographed the final moult with the grasshopper maturing into an adult in the same exoskeleton. So it appears that somehow I missed observing the last moult in the development process. 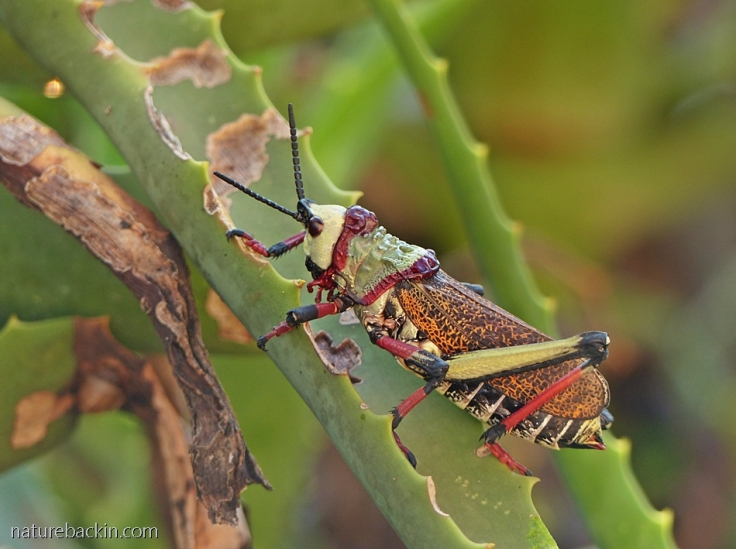 This adult is enjoying eating the leaf of a krantz aloe (Aloe arborescens), which seemed to be a favourite food plant also for nymphs at earlier stages of their development. The aloe takes a bit of a hammering but judging from previous years of grasshopper munching, it recovers and although bearing scars it goes on to flower successfully

The colour of these foam koppie grasshoppers is variable in that different forms or morphs of the same species exist. I have only seen this colour morph in our garden. The better known colour morph, predominantly black with red markings, also occurs in KwaZulu-Natal, but I have only seen it in the Western Cape.

I photographed this black and red variant of the koppie foam grasshopper (Dictyophorus spumans) on a permaculture farm near Oudtshoorn in the Western Cape. This colour morph shows why the grasshopper got its Afrikaans name rooibaadjie, which means ‘red jacket’

At maturity, the koppie foam grasshopper is large at about 6.5 cm (2.5 inches) in length. Hopefully most animals heed the warning of its conspicuous colours.

I was able to video a grasshopper moulting its skin. The moult is a long and laborious process for the grasshopper, but I found it fascinating to watch. This individual took over an hour and a quarter to complete the process. However, I have edited the video clips down to just under three minutes. 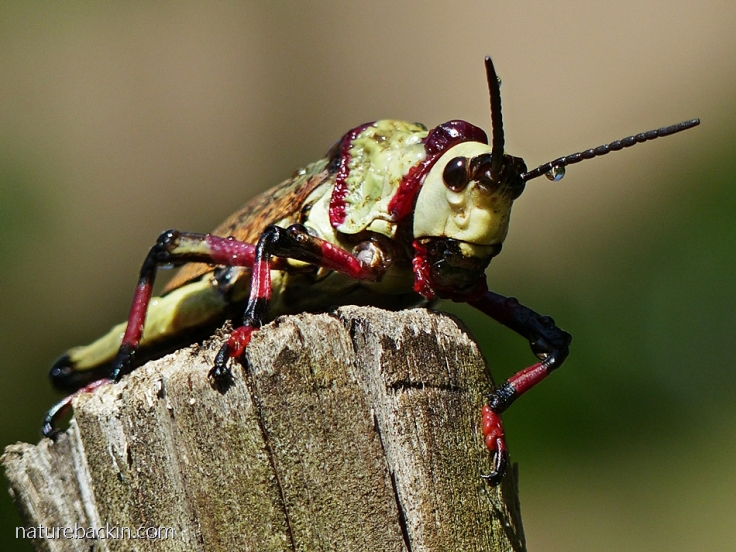