Reasons to be cheerful part 1: Ella the rescue cat 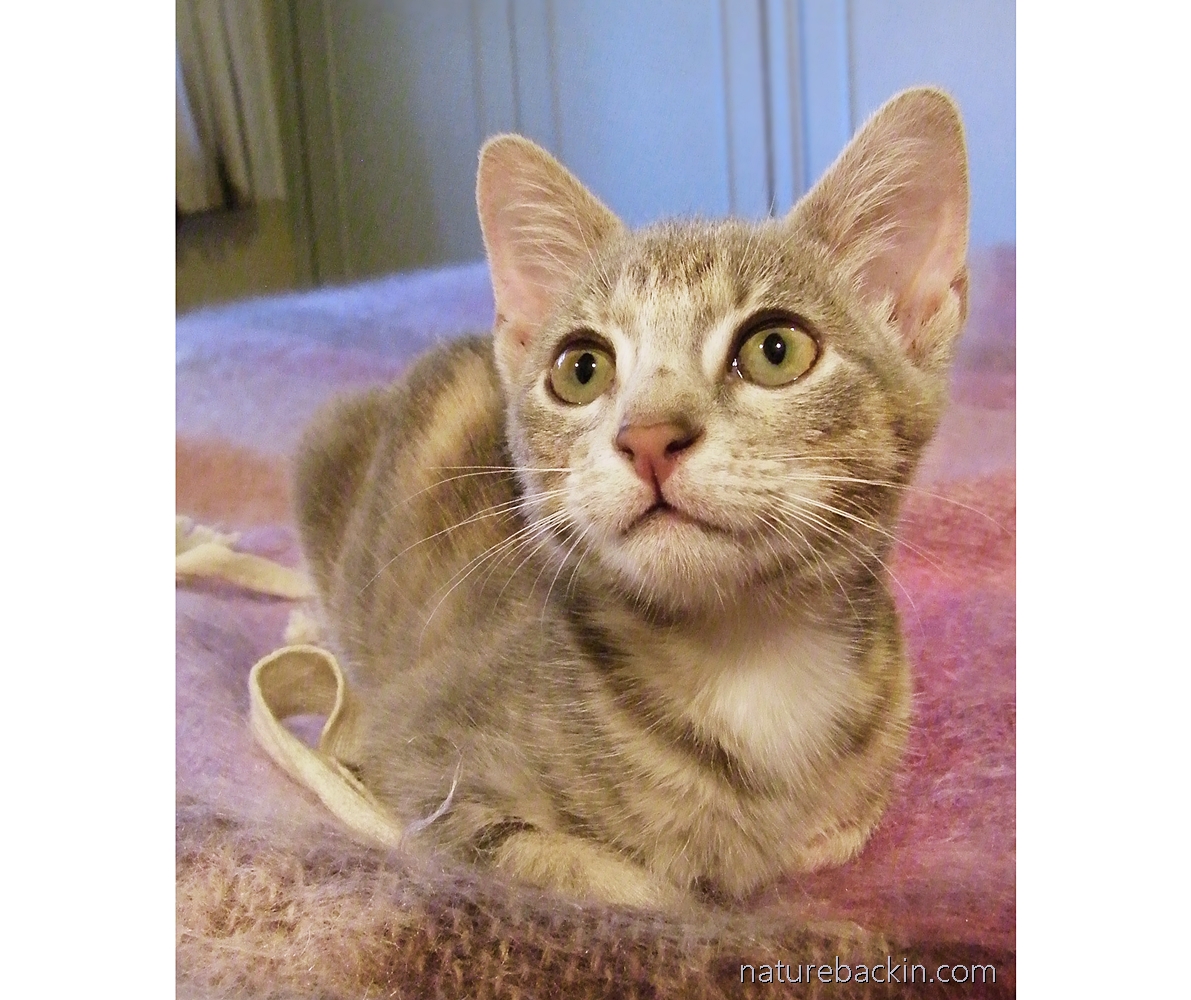 Starting off 2020 with a good news story about the lovely Ella, one of our rescue cats, seems appropriate enough. I had considered several other ideas, from baby animals in general to flower portraits taken during 2019, but settled on the story of Ella.

Ella was found at my husband’s place of work – a cable factory – in the salvage yard hidden behind some wooden cable drums, together with her two dead siblings. What had happened to their mother was never discovered. One of the workers brought Ella wrapped in a rag to my husband’s office, as he was known to be a go-to person for animal rescues. Ella was nearly dead, she was filthy and stank of the corpses of her dead siblings. She was about a week old and her eyes were still closed.

Dave (my husband) brought her home and we took her to the vet thinking euthanasia was the kindest option. The vet agreed that the kitten was dying, but said that she was dying of dehydration. If we could get the kitten successfully hydrated, then she would have a chance. 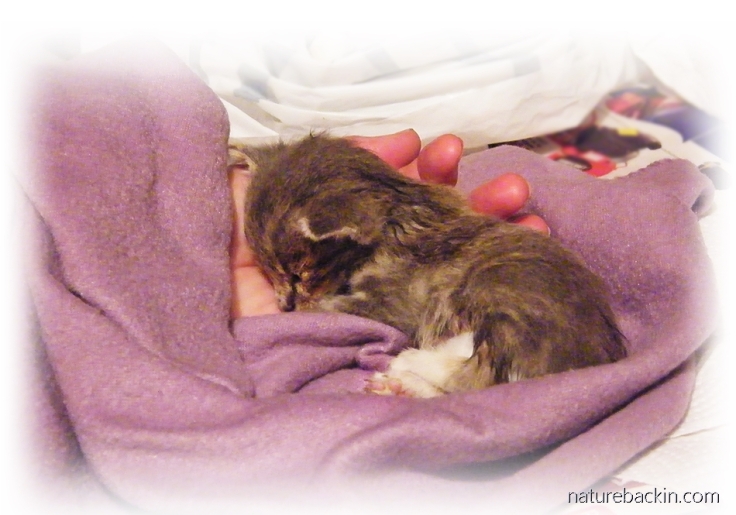 This is the first photo we took of Ella. By then she had been with us for over a week. We did not take any photos prior to this as we expected that she would die. But miraculously she didn’t

So the vet gave the kitten some fluid subcutaneously – not too much as otherwise the kitten might have gone into shock. She then set about cleaning the kitten’s black and sticky fur. The vet gave us a small syringe and some drip fluid – our instructions were to give the kitten 1 ml of drip fluid every 30 minutes for 12 hours. Thereafter, we could increase the amount and give her fluids every hour.

Fortunately, it was a Friday and we had the weekend to tend to the kitten and slowly she came back to life. We kept meticulous notes of the amount of fluid she took in and when, and also of the amount of urine she produced. Once she was hydrated we could start bottle-feeding her milk, little and often.

By Monday, the kitten was much stronger. A kind animal-loving friend agreed to look after the kitten during the day when we were at work. Strangely enough, Dave and I both suddenly went down with serious bronchitis. First one and then the other were booked off work. Both us needed to use a nebuliser as part of the treatment.

And so we were home very sick, but we were able to take turns feeding the kitten in between taking turns using the nebuliser. Slowly we got better, and so did she.

Ella on the mend. She is still looking frail and the crusty substances on her ears and face are disappearing. She is now able to sit and stand. During her first week with us her hind legs had been paralyzed, but as she grew stronger her mobility improved

With our previous hand-reared kitten, Nina, we had problems with the kitten formula milk giving her constipation. On the vet’s advice we swapped the feed to a mix of 50% canned evaporated milk and 50% water (boiled and cooled) and that solved the problem. With Ella being so touch-and-go, we only used the evaporated milk mixture and all went well. She got the hang of using the bottle eventually.

Kittens need to be able to suck and so regulate feeding themselves. At first it may be necessary to gently drip a drop or two of milk into the kitten’s mouth. It is critical not to squirt milk into the kitten’s mouth because it is very easy to get liquid into the tiny lungs, which can choke the kitten to death or lead to infection such as pneumonia. Kittens should not be held on their backs when being bottle fed as that too can lead to kittens aspirating fluid, in other words inhaling fluid into their airways.

Among the biggest dangers when bottle-feeding very young baby animals are constipation and/or diarrhoea. Both are equally dangerous. Mercifully, with Ella we avoided both.

Another complication when raising tiny kittens is that, without a mother cat to lick and wash the kitten’s tummy and genital area to stimulate urination and defecation, the human fulfilling the mothering role has to do this stimulation using damp cotton wool after every feed. If one does not do this correctly the kitten will block up and die. This process of stimulation is perhaps a more stressful aspect than getting the kitten to accept and suckle on the bottle.

Ella sleeping after a feed and having done her toileting. Clean and dry she can sleep comfortably. Like all babies, kittens need to sleep a lot 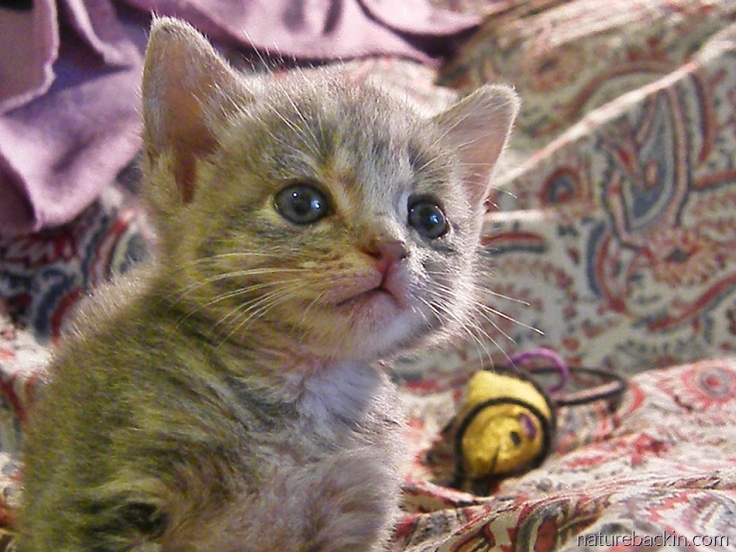 Ella at four weeks old starting to look like a normal kitten, and learning to explore and to play

Ella aged six weeks. At this age she acquired black pigmentation on either side of each nostril, however, these patches faded as suddenly as they appeared 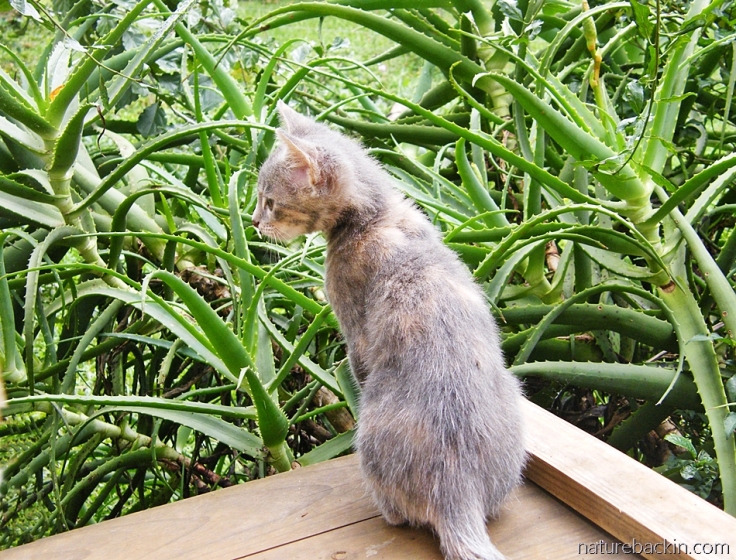 Ella on a shelf outside the window, venturing outside into our enclosed cats’ garden

Ella on the window sill in the company of our other four cats. All of them are rescued feral cats

Ella with Nina, who was the first kitten we hand reared 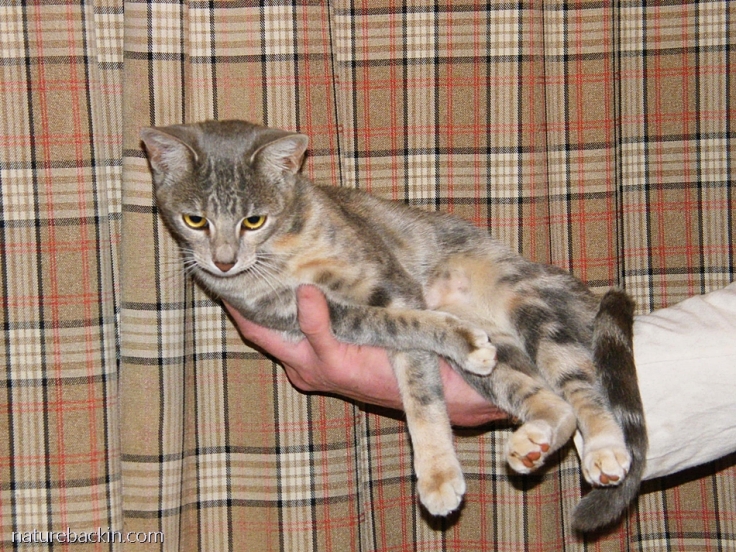 Ella, at six months. I thought of her colouring as being pale tortoiseshell, but I have been informed that the correct terminology for the colour is “dilute tortoiseshell” 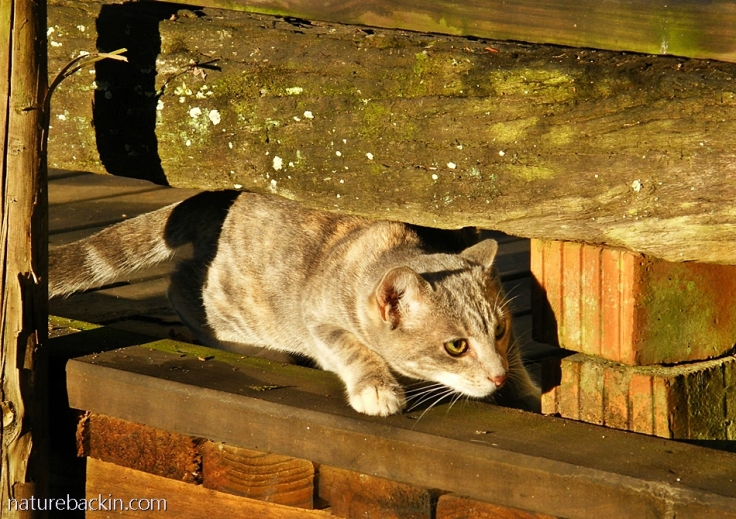 Ella stalking one of the other cats during a game

Ella with brothers Beewee and Ned and Nina the tabby 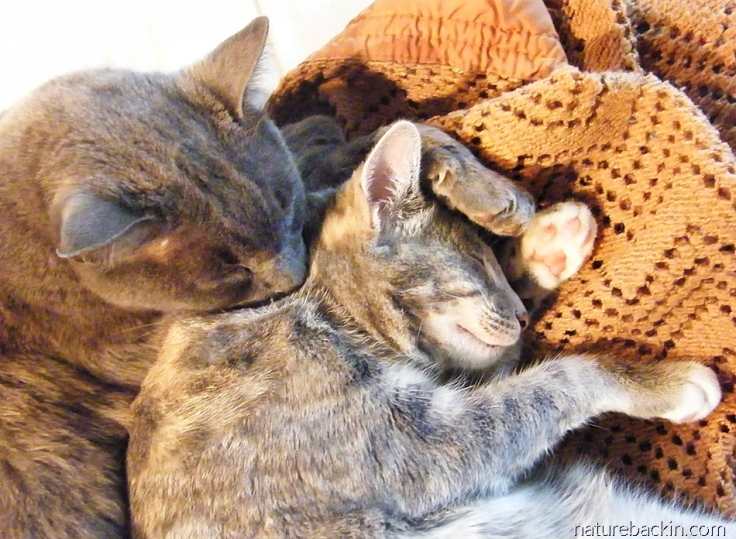 Ella cuddled by Ned. Ned was a fantastic help as co-foster parent to several rescue kittens, washing them fastidiously and being an affectionate presence and role model 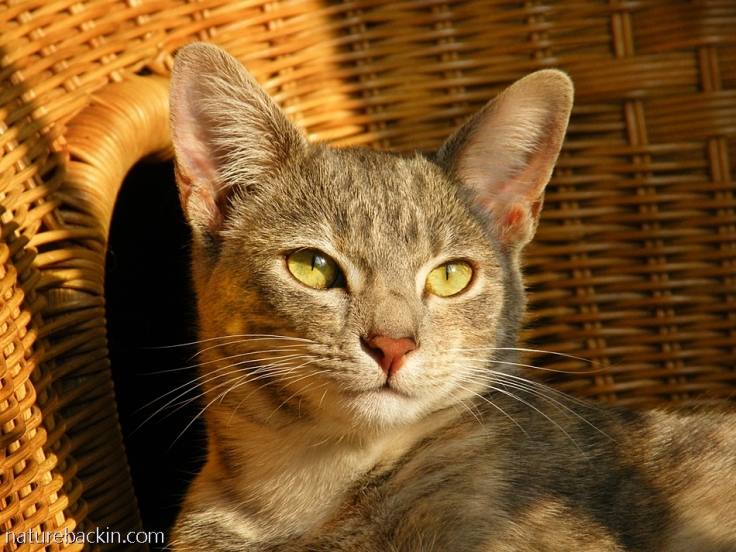 Moving on, here Ella is four years old. As I took this photo I realised she was preparing to jump onto my shoulder

Ella and our cat Pip, also a rescued feral cat, became inseparable friends. This was after the brothers Ned and Beewee passed on within weeks of each other at the age of 18. The aging Pip also had health issues and Ella was his devoted companion 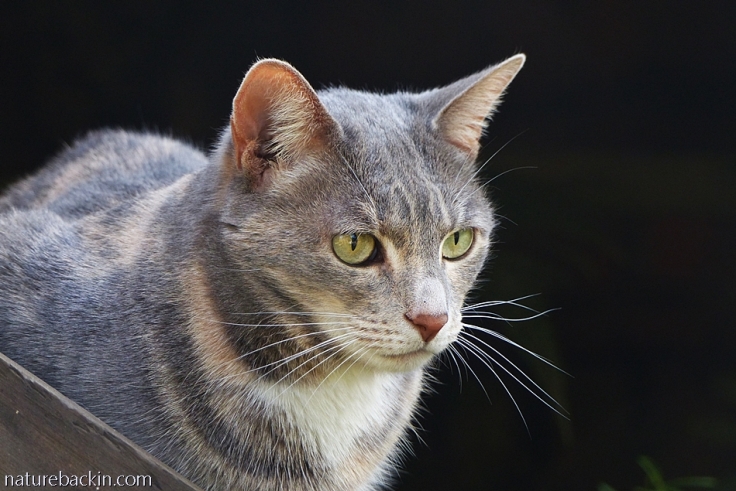 Ella at six in her prime years

Ella showing her true feline nature walking in our enclosed cats’ garden. So as to keep the cats safe, and to prevent them from hunting birds and other wildlife we have an enclosed garden that the cats have permanent access to from our bedroom window. For more on this enclosure and cats and a wildlife garden see here

Climbing a tree inside the enclosed garden 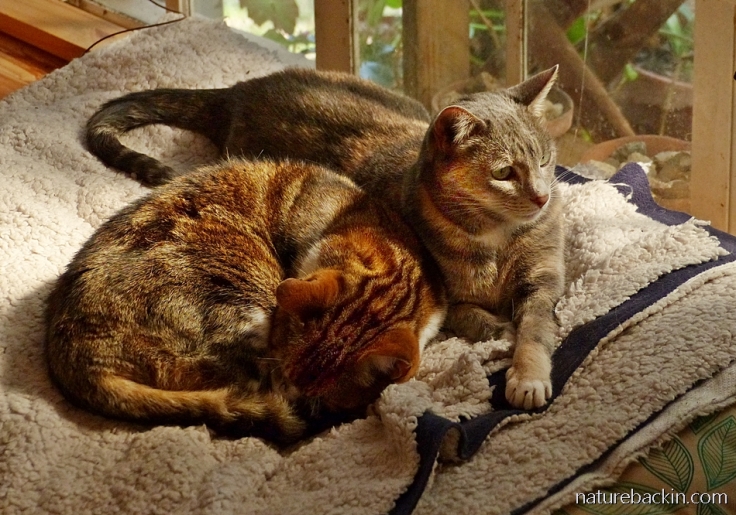 Ella was bereft for months after Pip’s death, often licking herself incessantly for comfort until patches of her fur came out. It took a year for her to find peace, and she has taken to licking us from time to time when she needs that kind of contact. She is now working at restoring a friendship with Nina. Our third and youngest cat Nougat, also hand-reared, is a complicated personality. He is mending his sometimes bullying ways and the three cats are now getting on quite well.

Ella today, aged 9. I meant to take a photo of her today during daylight hours but I forgot, so this was taken this evening in electric light and Ella is a bit startled by the focus light on the camera that beamed at her briefly. As I write this she has come up to my desk and is inviting me to play. She brings much cheerfulness and joy to our lives.

41 thoughts on “Reasons to be cheerful part 1: Ella the rescue cat”