Doves may be relatively common, usually their colours are subtle, but they should not be taken for granted. The understated beauty of doves is something to be celebrated.

I think that doves are particularly charming and I have posted about them before. That a species is common does not guarantee its survival in the face of onslaughts that might include persecution, unsustainable hunting, habitat loss, and the effects of pesticides and other toxic substances and pollutants. The extinction in the late 1800s of the common Passenger Pigeon in North America is a particularly dramatic example of the complete eradication of a numerous population of birds (for more on the Passenger Pigeon see here).

There are four species of dove that visit our garden – two are considered common and two less so. Our garden is also visited by a fifth member of the Columbidae family (which comprises doves and pigeons), namely, the African Olive Pigeon, but in this post I will stick to the species termed as being doves, at least in the English language.

Laughing Doves (Spilopelia senegalensis) are a modest presence in our garden. They are relatively small doves and they spend a lot of their time foraging on the ground. For more about Laughing Doves see here and here. 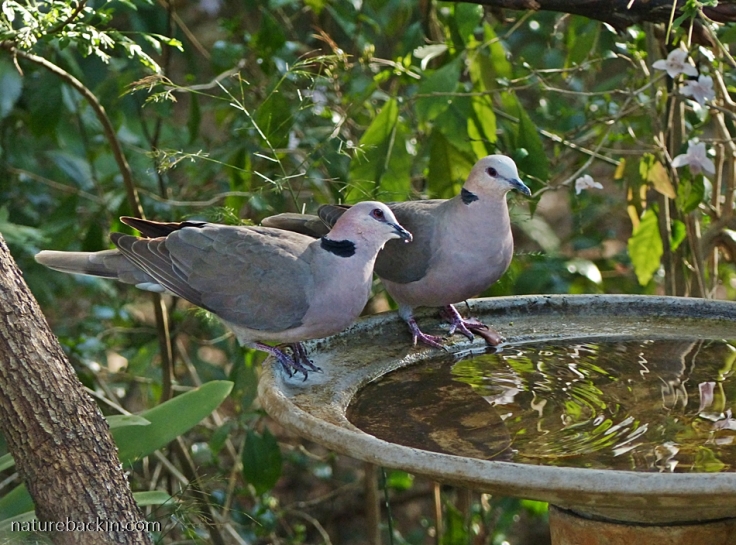 When we first moved to where we now live about 15 years ago a small posse of Tambourine Doves (Turtur tympanistria) used to visit regularly foraging together as a group. Sadly, these days we only see one or two doves at a time and not as frequently as before, and their wonderful liquid call is less apparent too. 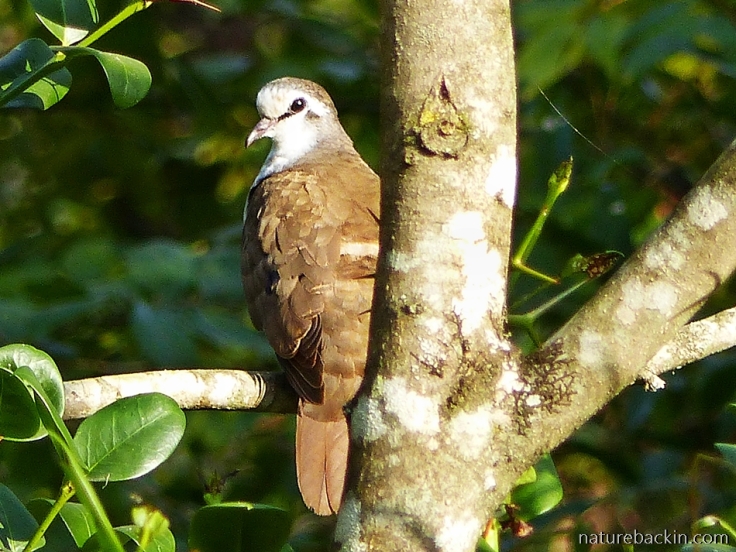 Very shy, I had to photograph this Tambourine Dove from afar and hence a rather grainy pic

Tambourine Doves are striking because of their unexpectedly bright white underside. Also noticeable are the iridescent emerald green spots on their wings. When they fly their chestnut-coloured wing feathers are very evident.

Also photographed from afar and through a window, this Tambourine Dove is foraging in its typical almost crouching posture

The fourth dove to visit our garden is the Lemon Dove (Columba larvata), which featured previously in this post. It usually sticks to thick cover and I have only seen it venturing out onto more open ground at dusk or on very overcast days (when the low light adds to the difficult of photographing this usually wary bird). Recently though, when there were a few overcast days we were delighted to see a pair of Lemon Doves venturing out to look for seed on a patch of lawn.

Celebrating “ordinary” doves has made me mindful once again of Joni Mitchell’s song “Big Yellow Taxi”. She wrote this song on a visit to Hawaii in 1970 and it remains just as pertinent today – if not more so.

This is the first verse:

And here is a clip of the incomparable Joni Mitchell performing “Big Yellow Taxi” back in 1970.

And demonstrating that there is no room for complacency regarding the survival of even common birds, a recent study published in the journal Science found that nearly 30% of the total number of birds, including even common birds such as sparrows and blackbirds, are in decline in the United States and Canada, and these declines are occurring across all biomes (see here for further details about this study).

There has, however, been a recovery in numbers of some birds species associated with wetlands due to a proactive protection of wetlands, and some raptors such as Bald Eagles have increased in number because of increased protection and the banning of DDT (see here).

Among factors contributing to declining bird numbers are habitat loss, seashore developments, industrial-scale intensive agriculture, the widespread use of pesticides and climate change. Improved conservation of habitat and increasing and enforcing regulations to protect birds are sorely needed, but at the same time we can all contribute to the well-being of birds.

Backyard gardeners can play an especially important role in providing for birds (and for the critters that are sources of food for insectivorous and predatory birds) by planting native plants, reducing lawn by planting more shrubs and trees,  and by not using pesticides or rodenticides (for recent information on how rodenticides kill non-target species of birds and mammals (including caracals and mountain lions) see https://www.humanegardener.com/rodenticides-modern-day-ddt/).

Other practices to help protect birds include trying to make windows safer to cut down on bird strikes, advocating for bans on single-use plastic items and avoiding using disposable plastic (and other) items as much as possible. Owners of pet cats can provide their cats with enclosed gardens or catios to prevent cats from roaming and hunting (and it makes cats safer too).

For more information and tips on how to be more bird-friendly see: Seven simple actions to help birds.

P.S. I will be away on a road trip to the Western Cape for two weeks and I have scheduled the next two posts to be published automatically during my absence.