Caterpillars with wings: An eye witness account of Battling Glider butterflies after hatching

Very busy caterpillars that were doing more walking than eating in a nearly bare tree at the bottom of the garden first attracted my attention. My guess was that the caterpillars were getting ready to pupate, and so over the next few days I kept a look out hoping to find some pupae.  It turned out that many of the caterpillars had been successful: I found dozens of butterfly pupae attached to leaves in nearby plants, and a few days after that, perching in the surrounding vegetation there were several butterflies with wings outstretched in the morning sunshine, these butterflies evidently from the first caterpillars to pupate.  Inspecting the pupae, I found that several had hatched and some had newly emerged butterflies clinging onto the now empty shells. But as many of the pupae were still intact I couldn’t help thinking: If I keep careful watch I might actually witness a butterfly being born.

Of course it’s rather fanciful to say that butterflies are being born when they emerge from the pupae, although it is equally miraculous. It is perhaps more accurate to say that caterpillars are born when they hatch from the eggs laid by the previous generation of butterflies. How come I had not noticed that previous generation of butterflies in our garden? Perhaps there was something about this season that has made the caterpillars more abundant or perhaps I am becoming more observant?

And talking about being observant, I title this post an eye witness account, but looking at the header photo, one has to ask – who is watching who?

In this photo, one of the caterpillars (showing its branched and black-tipped spines) is walking rapidly while likely on the move to find a place to pupate. The host tree, Kiggelaria africana (Wild Peach) was eaten bare of most of its leaves and so the caterpillars moved to the neighbouring Curtisia dentata (Assegai) trees before pupating under the leaves there, or else descending to pupate on the slender leaves of the nearby Dietes grandiflora (Wild Iris) plants

A butterfly pupa may appear to be dormant but a lot is going on inside as the caterpillar is reconfigured into a butterfly. Surprisingly, while in the pupa the transforming insect can show signs of being sensate and may shake or wriggle in response to a perceived threat, as I found when I turned over a leaf and found a pupa underneath. It knocked rapidly from side to side in response to my handling the leaf. Over ten days later I was happy to see the butterfly that eventually emerged unscathed.

Hard to photograph, but this is an attempt to show something of the profusion of pupae adhering to the underside of the Wild Iris leaves

After seeing the hatched butterflies, the next morning I hastened down the garden to see what had happened during the night. Several more butterflies had emerged from the pupae and were hanging beneath the empty pupa shells expanding their wings that had been folded away for so long as they developed inside the pupa (or chrysalis). 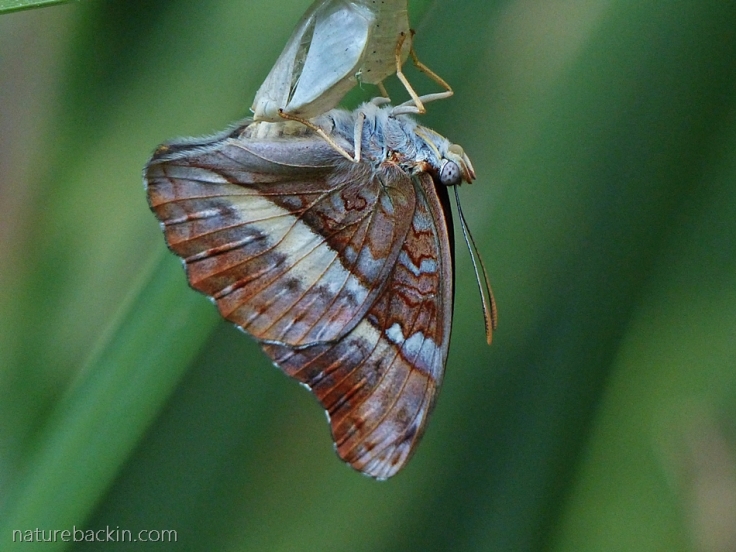 A butterfly hanging beneath the pupa shell from which it had emerged about an hour before. This butterfly’s wings have entirely unfurled, but it takes more time for the wings to strengthen sufficiently before it can fly

After emerging from the pupa, a process termed eclosion, the wings of the butterfly are soft and folded. As the butterfly hangs upside-down underneath the shell of the pupa to which it clings, it pivots and swings and moves its wings up and down to pump body fluid into the veins so as to expand and strengthen the wings. 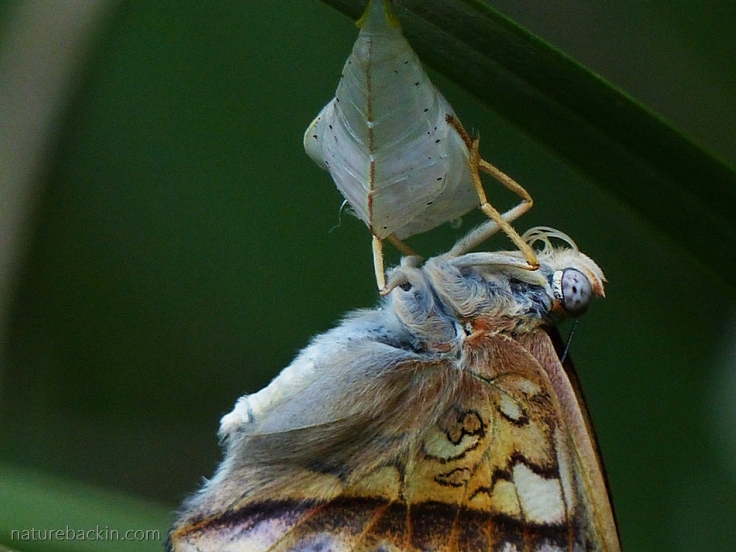 A close-up of a newly emerged butterfly suspended upside down hanging onto the empty casing of the pupa that had contained it. Note the partially unfurled tongue (proboscis) that appears to be a double tongue

Two butterflies, a female on the left, and a male on the right, working at strengthening their wings and at the same time each one unfurling and stretching the proboscis and then furling it again

I was fascinated to watch the butterflies working hard to expand and strengthen their wings, and I also noticed that after hatching each continually worked the proboscis (tongue) and I thought (mistakenly) that each butterfly had a double proboscis. I was amazed to learn subsequently that the proboscis develops from two long C-shaped parts (termed galleae) that form separately in parallel to each other in the pupa. After emerging from the pupa the butterfly works the parts in order to fuse these two galleae together to form the hollow proboscis.

In Nymphalidae butterflies (including the species in these photos), when the newly emerged butterfly is actively uncoiling, disentangling and recoiling the galleae, it is actually working to interlock minuscule hooks that function to join the galleae together, using tiny drops of saliva-like fluid that contribute to the process. Assembling the two parts of the proboscis into one has to happen immediately after emerging from the pupa before the cuticle hardens. For a full description of this “once in a lifetime sequence of events” see here. Unfortunately, not all butterflies manage to assemble the proboscis properly in time, rendering them unable to use the incompletely fused proboscis to take in nectar and other fluids.

Initially green in colour, the pupae of this species of butterfly change in colour as the butterfly develops within it. In the photo above, an eye of the butterfly in the left-hand tip of the pupa is visible, as are parts of the folded wings. As the casing of the pupa softens prior to the butterfly emerging, it becomes more transparent

After an hour or two this butterfly’s wings have strengthened to the point that it can now perch upright. It is still a few hours away from being able to fly 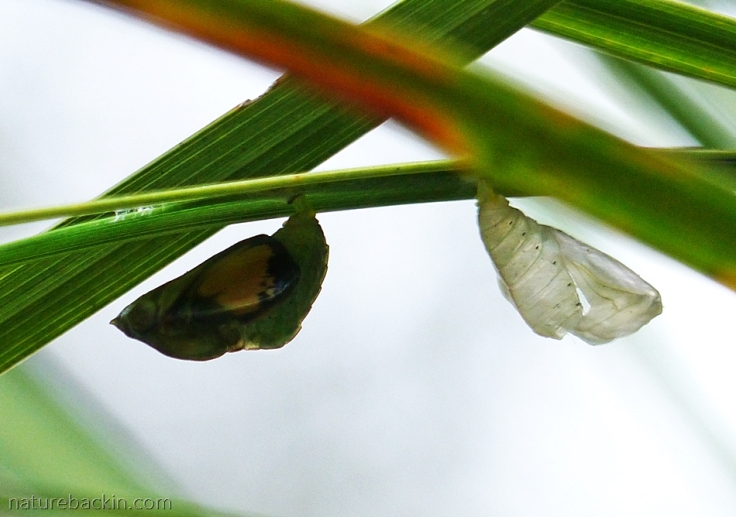 Both intact pupae and the empty casings of butterflies that had flown remain attached to the leaves of a Wild Iris. It will not be long before the butterfly in the pupa on the left emerges, although I found it difficult to predict when that would happen with much accuracy

This butterfly hatched from a pupa attached to the underside of a leaf of a Curtisia dentata tree, which neighbours the larval host tree. Another pupa can be seen to the left. I think that this is a male butterfly, although it can sometimes be hard to tell from the underside of the wings, as the colour varies depending on the brightness of the light and on how the wing is angled to the light 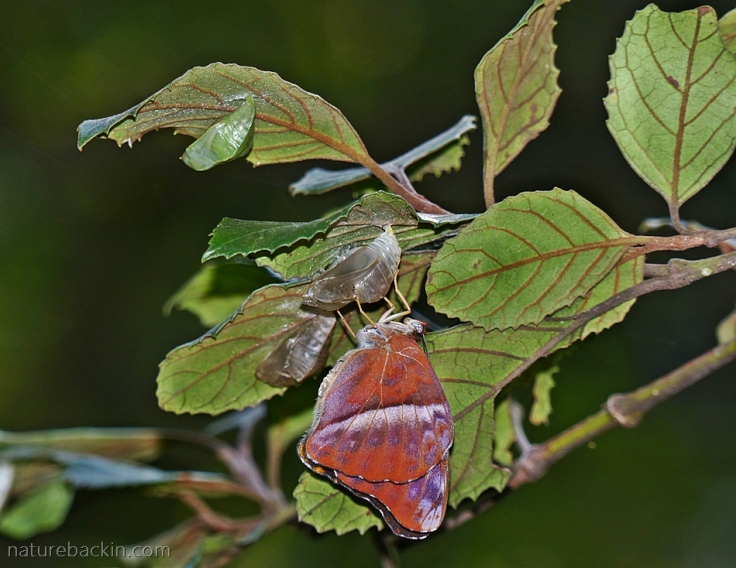 I used the camera flash to photograph this female butterfly still hanging onto the pupa shell after she emerged from it. Her wings are still soft. Behind is another empty pupa and above that a still intact pupa can be seen under leaves of the Curtisia dentata 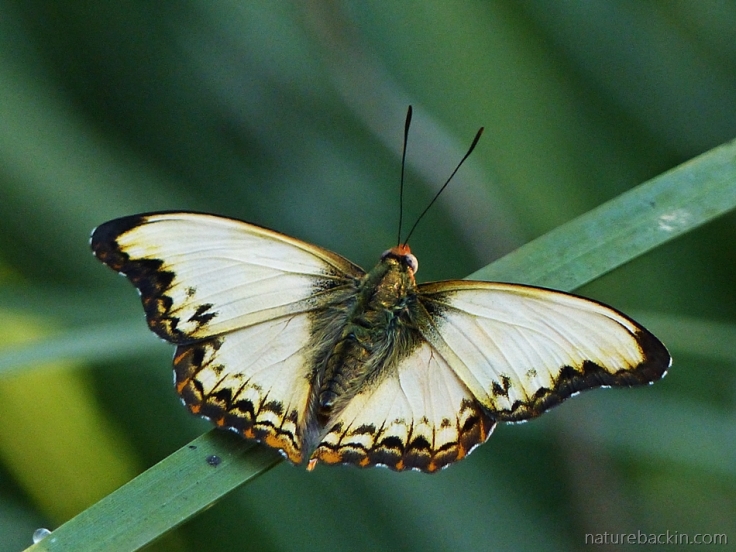 Having seen so many butterflies at various stages of their development, I was starting to figure out the colour differences that I found confusing at first. I consulted my Pocket Guide to Butterflies of Southern Africa and also looked at butterfly images on line, and concluded that these butterflies are known as the Battling Glider (Cymathoe alcimeda). They belong to the large Nymphalidae family of butterfly, comprising over 6000 species. Gliders belong to the subfamily Limenitinae.

Most species of butterfly in the Nymphalidae family walk on two pairs of legs as the size of the front pair of legs is significantly diminished relative to the other two pairs. Because these forelegs sport brush-like hairs Nymphalidae are referred to as brush-footed butterflies.

Rather dramatically lit by early morning light, this female butterfly has moved around to the top of the leaf to perch while moving her wings up and down to strengthen the wings as they harden. Three pupa, one unhatched, can be seen below the leaf on which she perches. Although the small forelegs of the butterfly cannot be seen in this photograph, it is clear that the butterfly is standing on only four legs 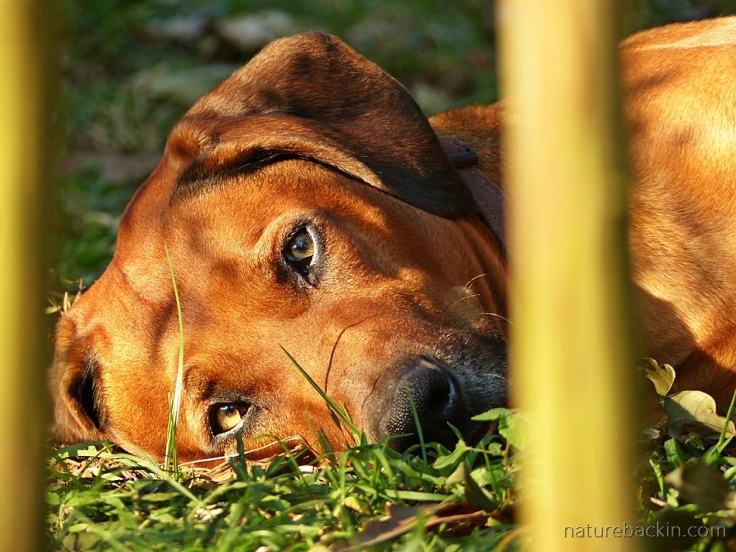 Of course not everyone finds spending hours watching butterflies rewarding. One of our dogs, Rory, lay down resignedly on the grass to watch me, clearly signalling that he is fed up. He is on the other side of a fence as otherwise he likes to sit close, and that rather disturbs what I am looking at and gets in the way of the camera!

While taking these photos and hoping to be able to see a butterfly actually in the process of emerging from its pupa, I took a few videos, including of butterflies expanding and strengthening their wings and some clips of a butterfly working on assembling its proboscis. (Unfortunately, the intermittent wind makes for a bit of extra movement at times.)

I am fond of this photo of a female Battling Glider, with her wings still noticeably soft, as she continues to strengthen and warm her wings in the early morning light

Of course so many butterflies flitting about on their maiden flights proved easy prey to waiting birds, including this Forktailed Drongo, keeping a sharp eye out from a nearby tree. I think my presence watching the butterflies hatch was a deterrent to the birds and may have prolonged the lives of several butterflies by a few hours at least

In its full glory, this female Battling Glider has done a bit of flying before settling again to warm her wings further in the autumn sunshine

Getting stronger and stronger in the morning sunlight, this male Battling Glider butterfly, after strengthening his wings and assembling his proboscis into one unit, is crawling up to the top of the leaves of the Wild Iris plant that hosted him during his long pupate stage. The fused proboscis can be clearly seen as it is uncoiled against the leaf 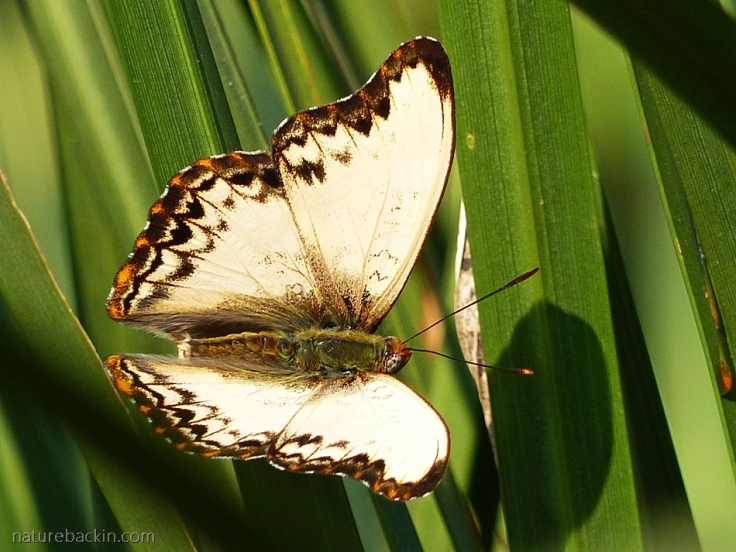 And here he is nearly ready to fly!

While taking these photos I had still had not managed to time it right to see a butterfly actually emerging from the pupa. But I finally did! And I was able to photograph butterflies emerging and even managed to take some video footage. However, I think that this post is long enough already, and so there’s more, but wait, only next week!

49 thoughts on “Caterpillars with wings: An eye witness account of Battling Glider butterflies after hatching” 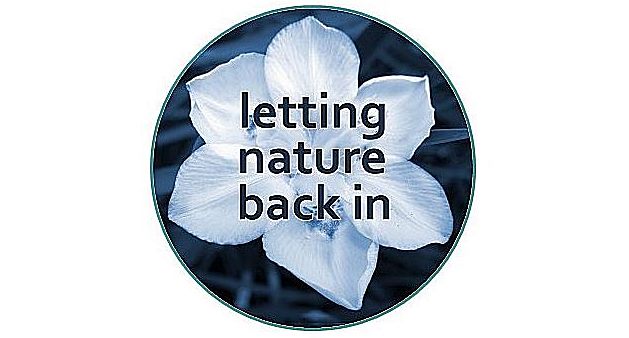