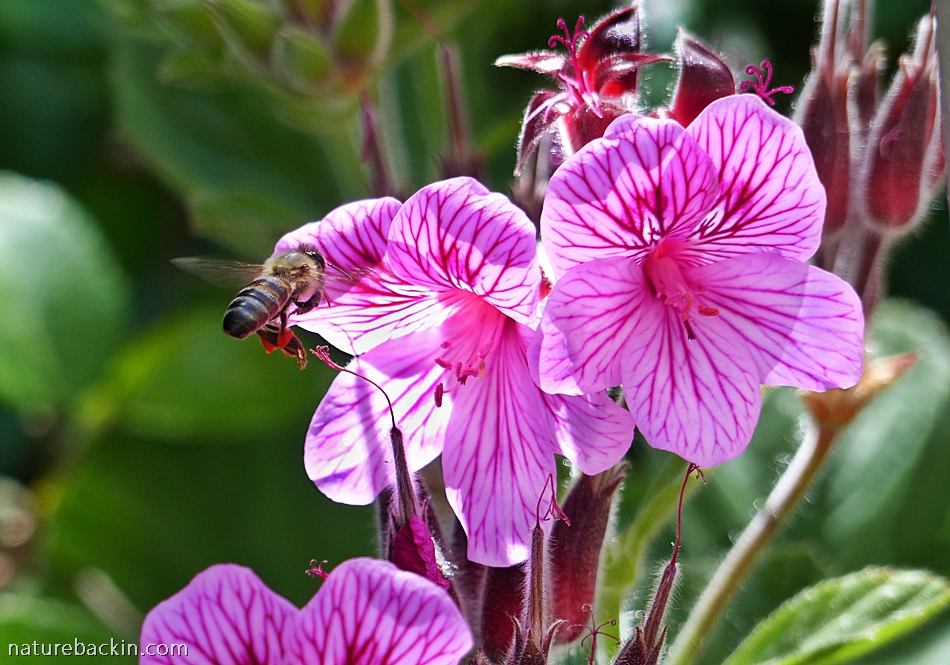 Although cultivars are popular in South Africa, indigenous species are also grown in many gardens and they continue to grow wild in their native habitats. One of the more conspicuous examples is the showy and shrubby Pelargonium cucullatum (see the photograph above). It occurs naturally on sandy and granite slopes in coastal areas and the adjacent mountains in the southwestern Cape, ranging from Saldanha Bay in the northwest and southerly to Gansbaai and the adjacent interior. 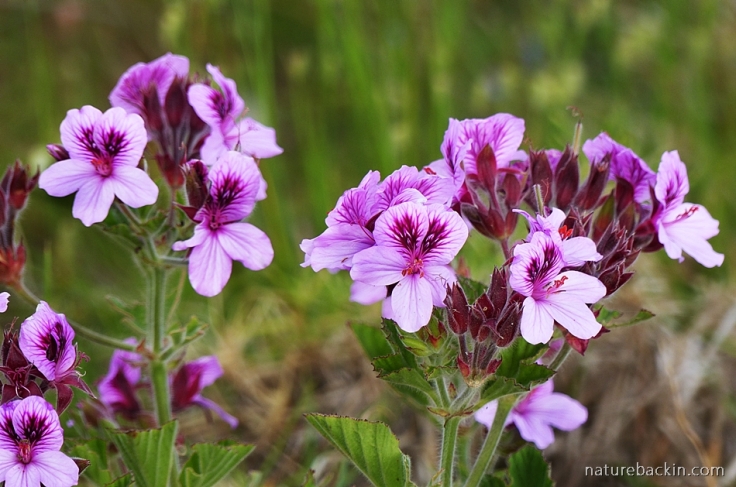 In the wild the flowers can vary in colour from white through pink to mauve. The flowers of the Pelargonium cucullatum in these photographs I photographed in the Hermanus region of the Western Cape 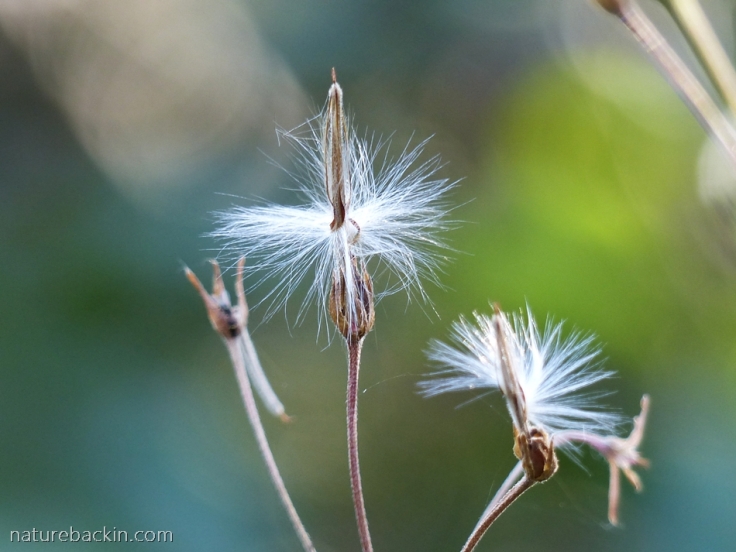 The wind-dispersed fluffy seed of the Pelargonium cucullatum

Samples of Pelargonium cucullatum were first taken to Europe in 1672 by the Leiden-based Dutch botanist Paul Hermann. He collected these samples from plants growing on the slopes of Table Mountain in Cape Town. Perlargonium cucullatum is the ancestor of many modern cultivars and hybrids known as regal pelargoniums.

The leaves of Perlargonium cucullatum produce a sweet smell when crushed, and they are used in a traditional medicine for coughs and chest congestion. The name of the plant derives from the Latin word cucullatus, meaning a cape or cowl, reflecting the cup-shaped leaves. Common names for the plant include hooded-leaf pelargonium and wild malva. 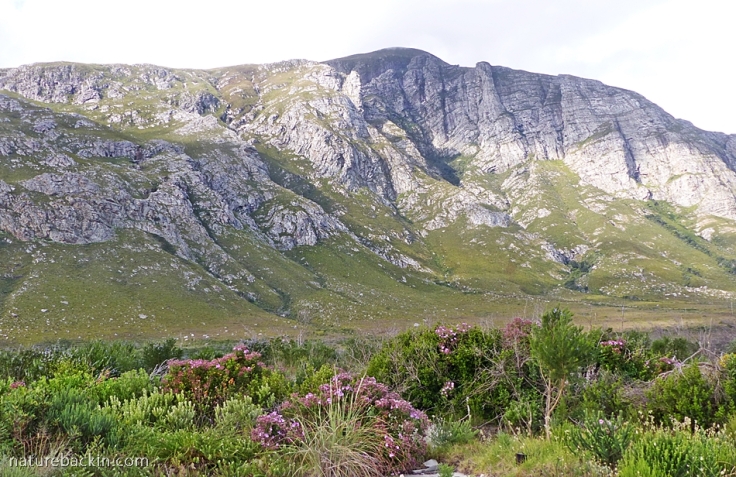 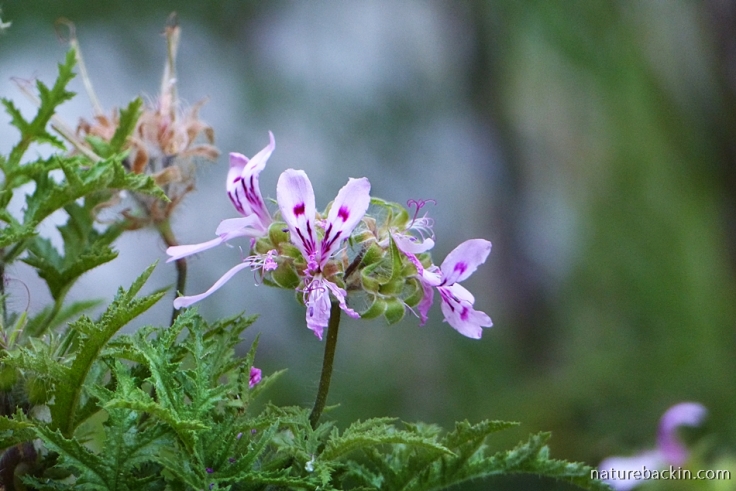 Above is another example of a wild species of pelargonium, which I photographed growing wild in a narrow kloof (gorge) between steep rock faces in the Gamkaberg in the Western Cape 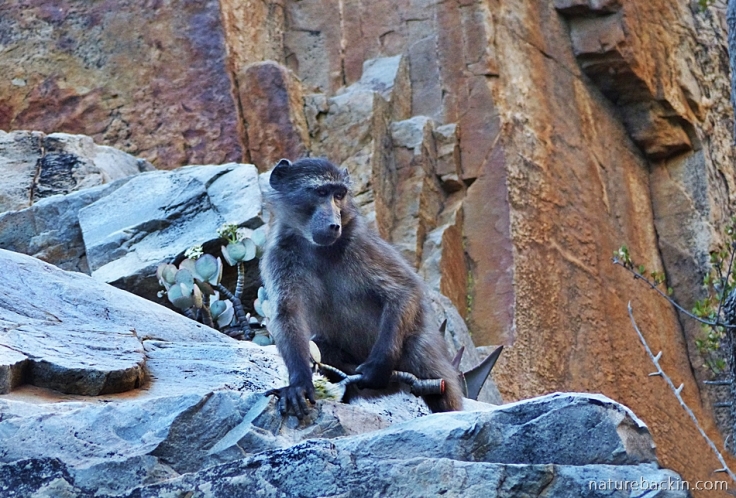 As we walked through the narrow gorge we were observed from on high by a troop of baboons looking down on us. This young baboon had picked a small branch off a succulent plant (probably Crassula arborescens) before settling down to eat the stem 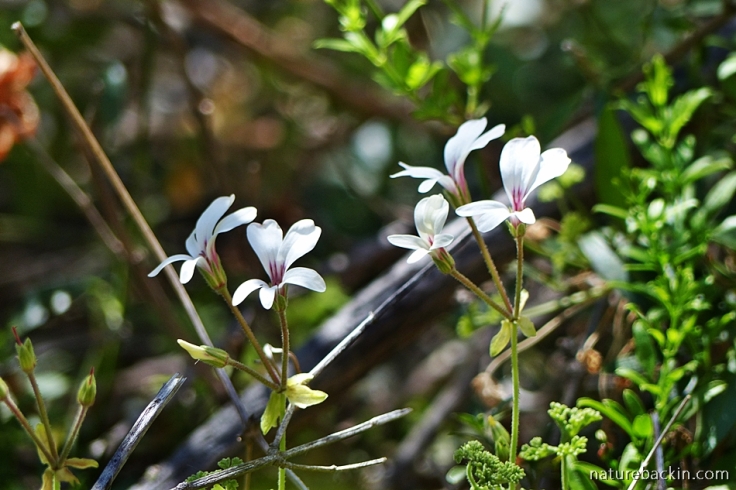 Also in the Gamkaberg, another pelargonium – this one with a delicate white flower streaked with pink at the centre – grows in the protective dappled shade and shelter of the kloof, which accommodates a diversity of plants that do not grow on the exposed rock faces and vegetated outcrops

Most of the cultivated pelargoniums that are grown today derive from South African species. One of the first zonal pelargoniums sent to Europe was collected in 1689 by the German-born and Netherlands-educated physician and botanist Hendrik Oldenland, in Meiringspoort. Trained by the Leiden-based botanist Paul Hermann (who collected the Perlargonium cucullatum samples from Table Mountain), Oldenland came to the Cape as an employee of the Dutch East India Company. From Cape Town he participated in an expedition into the Karoo, being one of the first trained botanists to collect wild plants in this region. He was a serious collector, cultivator and recorder of South African indigenous plants, and his work included establishing a herbarium at the Company Gardens in Cape Town. 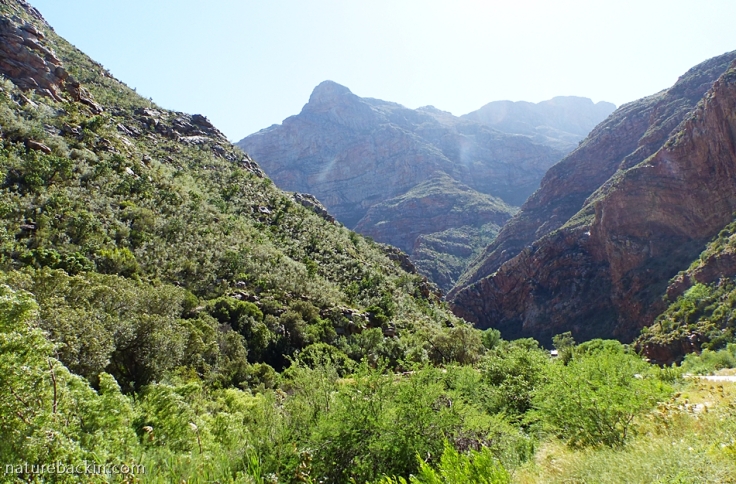 The pass through the Meiringspoort in the Western Cape nowadays is a tarred road that runs parallel to the river. Nevertheless, in times of heavy rains it is not unusual for the road to be closed as a result of flooding down the gorge 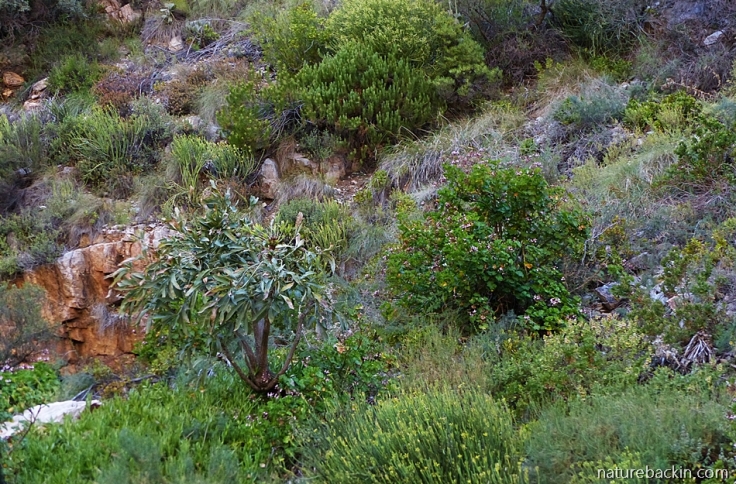 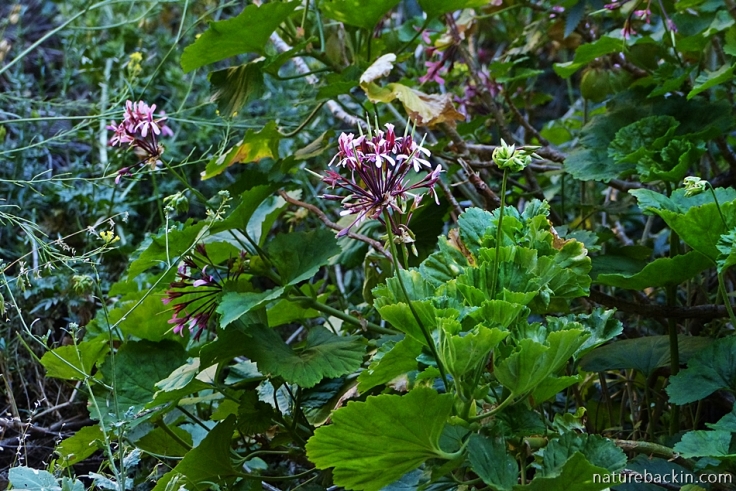 These robust pelargoniums growing in Meiringspoort are tall and shrubby, though recognizably similar to the smaller potted varieties and hybrids grown indoors and suited to very different circumstances to the rugged extremes of the Karoo 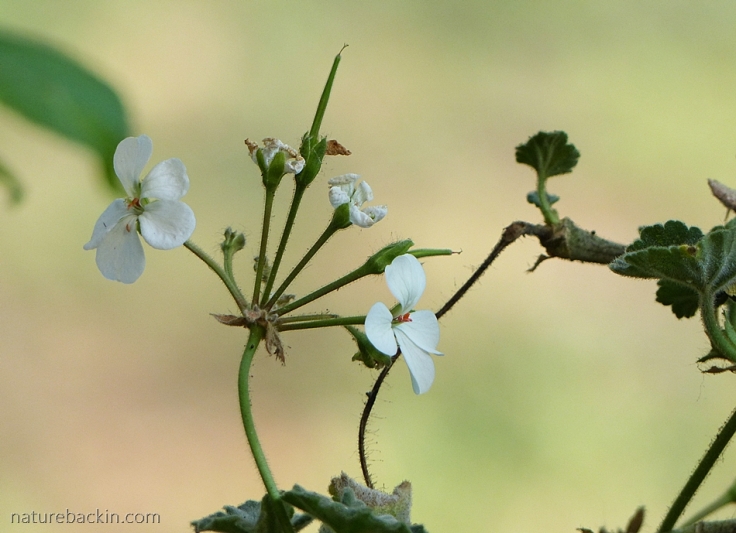 Both the genus Pelargonium and the genus Geranium belong to the Geraniaceae family. Initially the two genii were not differentiated, perhaps explaining why pelargoniums are still commonly although incorrectly referred to as geraniums. The term Pelargonium derives from the Greek word pelargos, which means stork, as the shape of the fruit or seed capsule is thought to resemble the beak of a stork. In the photo above, the beak-shape of the fruiting flower can be clearly seen in this white-flowered pelargonium from the Eastern Cape 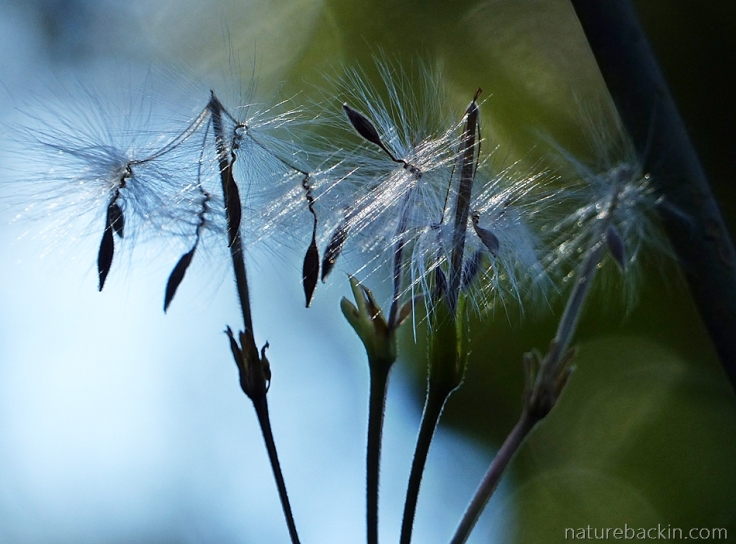 The seeds of pelargoniums are adapted for dispersal in the wind – they are light and feathery and so float in the breeze. Each seed has a spiral “tail” – after the seed lands on the ground when twisted in the wind the spiral effectively “cork screws” the seed into the ground. The above photo shows these seed characteristics in a Pelargonium tongaense growing in our garden 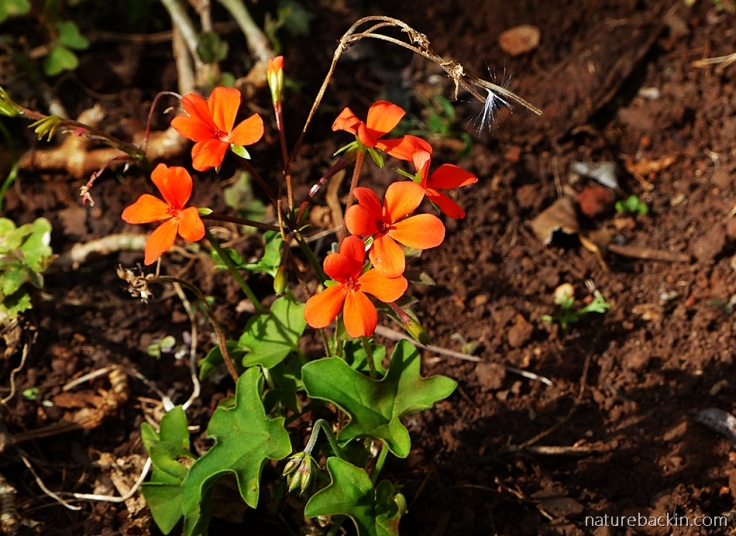 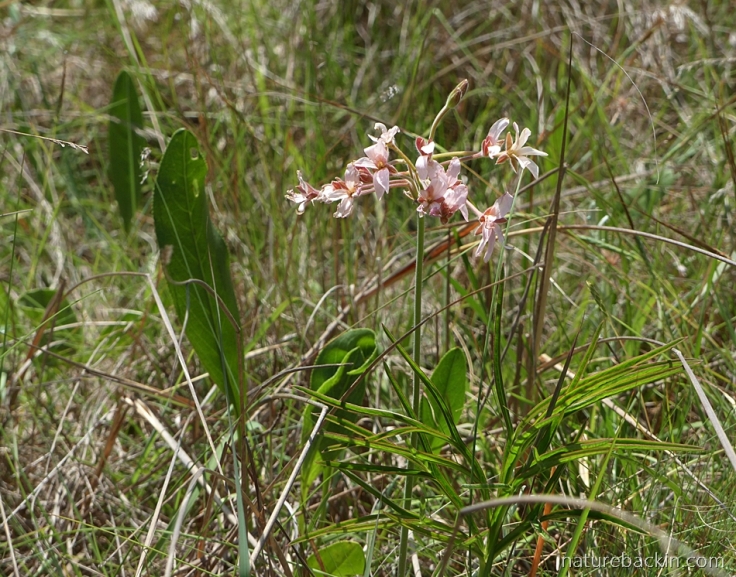 Growing wild in a patch of indigenous grassland in the KwaZulu-Natal (KZN) Midlands is this pink-flowered Pelargonium luridum (see above). Pictured below is a white-flowered variety also growing wild in the KZN Midlands. In traditional medicine the leaves are used to treat stomach upsets and dysentery 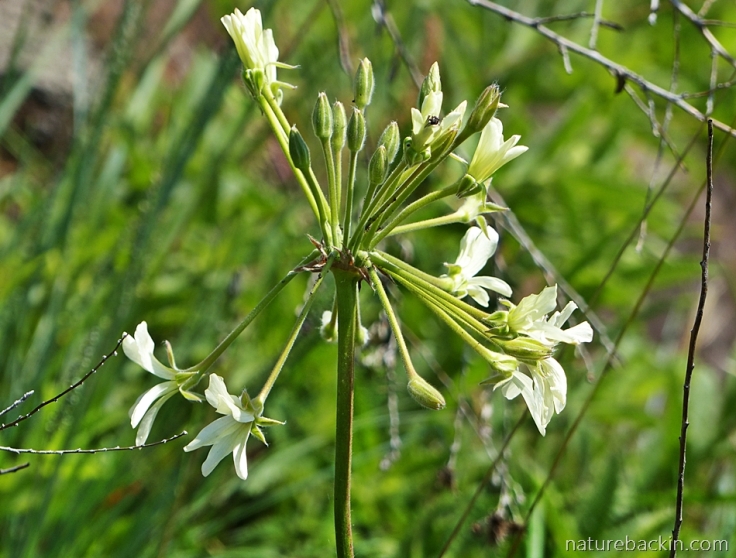 Another grouping comprises the semi-climbing ivy-leafed pelargoniums. The indigenous Pelargonium peltatum grows wild, scrambling in coastal scrub, along the southern coast of the Western Cape and east towards East London. Its ivy-shaped leaves are semi-succulent. Many cultivars and hybrids derive from this plant and some of these are popular planted in hanging baskets and window boxes, and they can also be used as a ground cover. 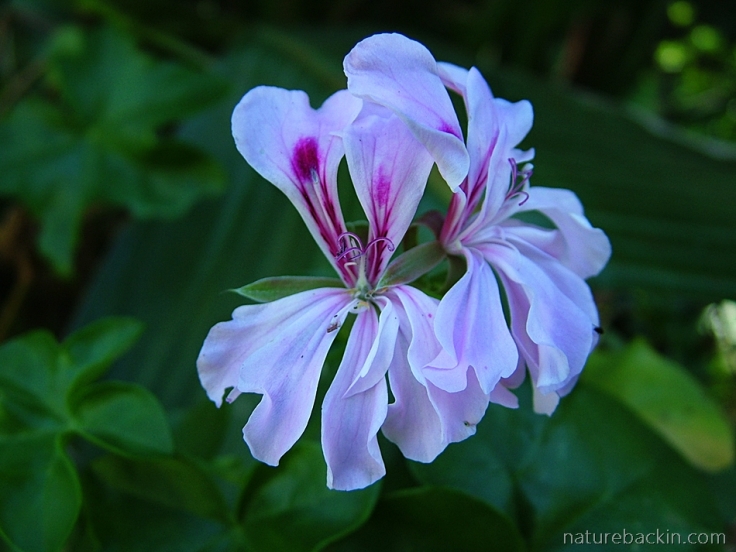 I think this plant, that used to grow against a fence in our garden, is the indigenous Pelargonium peltatum, but it may be a cultivated variety. Unfortunately, this one did not survive being cutback and transplanted when we had to move the fence, and neither did any of the cuttings

Also notable among pelargoniums are the many scented varieties with their highly aromatic foliage. Traditionally, some of the scented-leaf pelargoniums were used as perfumes in South Africa. One of the best known is the indigenous rose-scented variety, which we used to have growing in a pot in our garden, but not currently – something I need to remedy. We do, however, have a small cultivated variety reputed to be cinnamon scented. 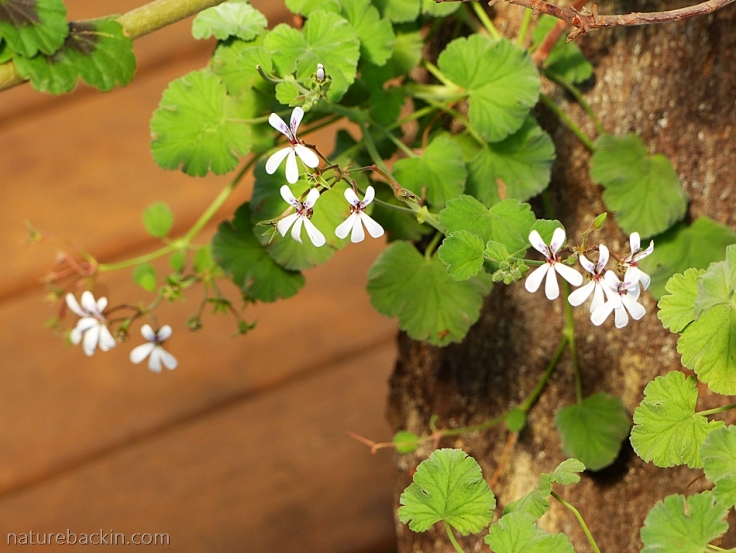 The scent is certainly strong, but I am not convinced that this little cultivated pelargonium smells like cinnamon as is claimed for it, but the dainty flowers are definitely pretty

There is much more that can be said about the attractive, diverse and easy-to-grow pelargoniums. Instead though, I will finish off with some photos of cultivars and hybrids of zonal pelargoniums that we have growing in pots outside our house. All of these are survivors. Many gorgeously flowering potted plants that we bought at markets proved to be very short-lived, so now I stick with these survivors and the little P. tongaense that grows out in the garden. 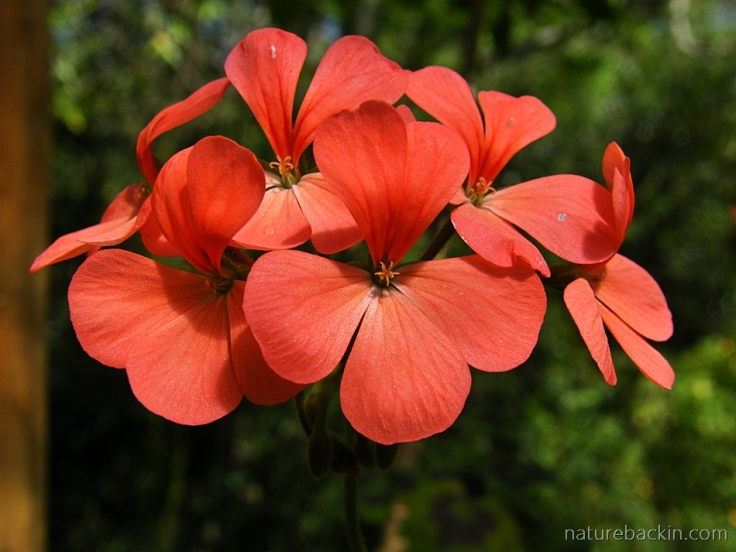 A lovely salmon-hued zonal pelargonium that has been growing in a pot on our back deck for over ten years, flowering reliably each year 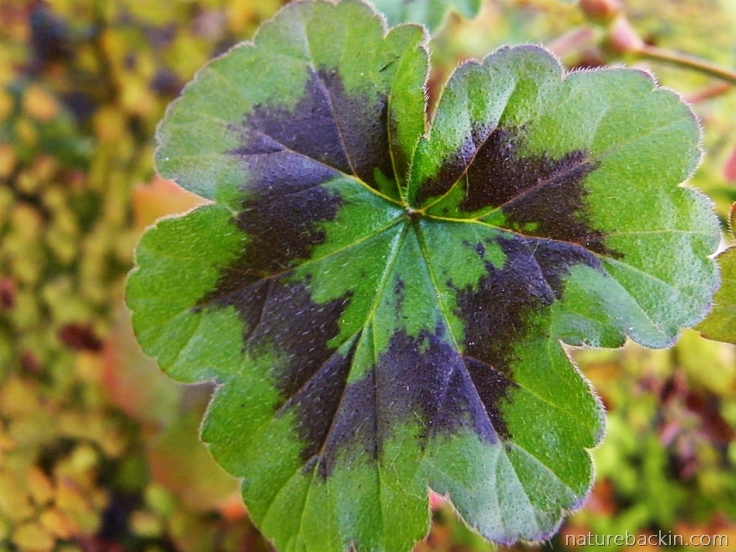 Zonal geraniums are so called because the leaf has zones or patterns in the centre of the leaves, as can be seen in this leaf that belongs to the salmon-coloured flowering plant pictured above 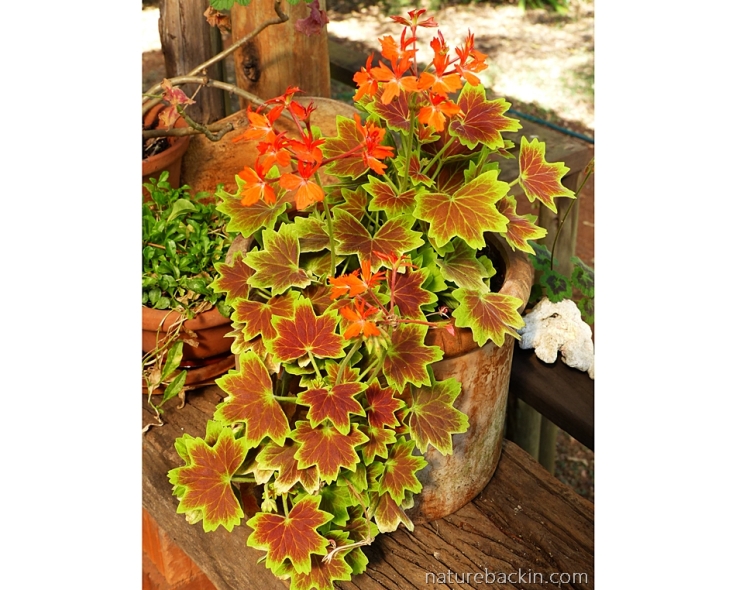 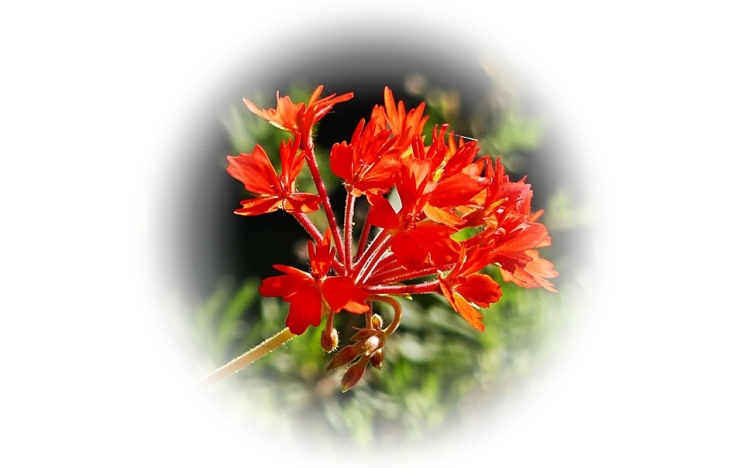 37 thoughts on “Pelargoniums – wild and domesticated” 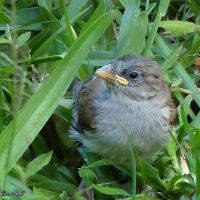 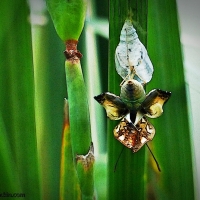 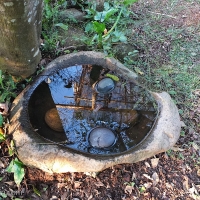 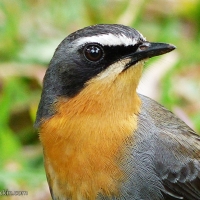