The blues is alright: Butterflies and flowers 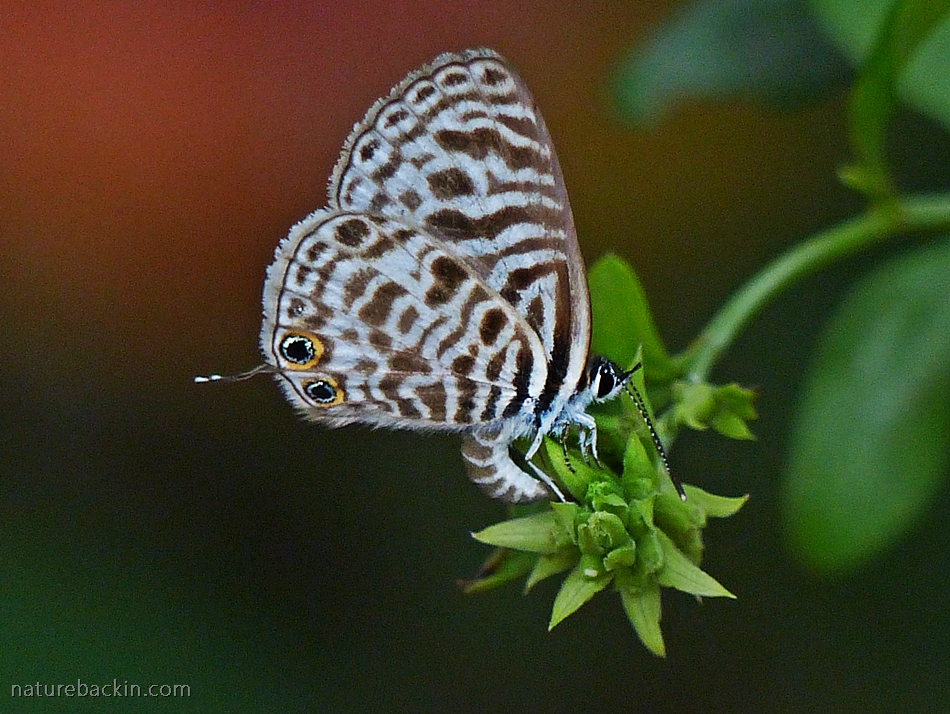 Members of a subfamily of gossamer-winged butterflies known as “the blues” are common in our garden. It is only when they open their wings that their blue colouration is revealed. Although these butterflies are small – in the region of about one inch across from wingtip to wingtip – their markings can be intricately detailed.

One of the blues in our garden. The beginning of the powdering of blue on the upperside of the wings is just visible as the wings are held slightly open. This butterfly is one of the Zebra Blues

So, reading about them I learned that the blues belong to a subfamily or tribe (Polyommatinae) that occurs across the globe, and that several genera in this grouping occur also in Africa. One pantropical genus is known as the Zebra Blues (Leptotes), and depending on which sources you look at, four or five species of Zebra Blues occur in South Africa.

According to the book Gardening for Butterflies: Planning and Planting an Insect-Friendly Garden (by Woodhall and Gray) there are four species of Zebra Blue butterflies in South Africa, and these species are impossible to tell apart in the field (dissection is necessary to distinguish them). All four species use several species of indigenous leguminous plants as larval hosts, with the Common Zebra Blue (Leptotes pirithous), and possibly the Short-toothed Blue (Leptotes brevidentatus) too, also using Plumbago as a host plant.

In our garden Zebra Blue butterflies are noticeably attracted to our Plumbago auriculata (Cape leadwort) shrubs and also to the non-indigenous leguminous alfafa/lucerne (Medicago saliva) plants growing around our veggie patch. 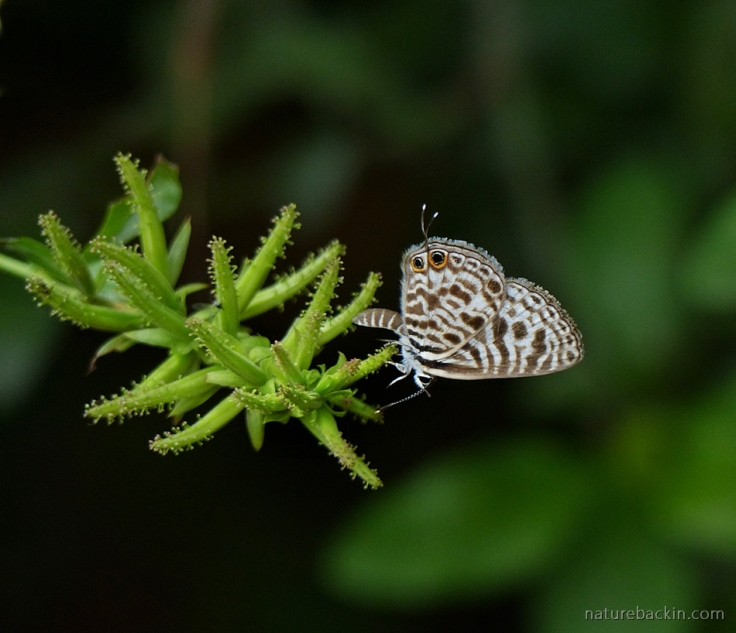 A Zebra Blue butterfly, showing its two eye spots and the two small “tails” on the hindwings, perching on a Plumbago auriculata plant in our garden. The flowers have dropped and the seeds are developing in a cluster at the end of a stem

As proof that it is using the Plumbago as a larval host, on several occasions I have seen these butterflies ovipositing on a Plumbago in the garden. Those that I have seen have laid their eggs on the sticky seedheads at the end of the stems.

A Zebra Blue butterfly laying her eggs on the going-to-seed flowerhead of a Plumbago auriculata in our garden. Orange autumn flowers colour the background

This is what the Plumbago auriculata looks like before the flowers drop prior to the seeds developing. Indigenous to South Africa, Plumbago auriculata, also known as Plumbago capensis, has become a popular garden plant in many parts of the world

An entry in Wikipedia notes that the Common Zebra Blue (Leptotes pirithous), also known as Lang’s Short-tailed Blue, occurs in southern Europe (in Spain, France and Italy), along the Mediterranean coast, in Asia Minor up to the Himalayas, and in most of Africa and in Madagascar.

And here, showing that it is indeed at least partly blue, is one of the few usable photos I have managed to take of a Zebra Blue with its wings open. This one is settled on an alfafa/lucerne plant in our garden. I think this is a female as there is less blue than in the males. The hind parts of the wings are slightly damaged and the small tails are not visible

So there we have it – shades of blue and degrees of uncertainty – but there is no doubt these are lovely little butterflies to have flitting about, be they male or female and whatever species they may indeed be.

45 thoughts on “The blues is alright: Butterflies and flowers”