I often see fishing spiders in our garden pond, but this is the only time I have seen one actually catching prey, and I was fortunate to have the camera with me.

Fishing spiders, also known as raft spiders, occur across the world, and the African species are in the genus Nilus (formerly Thalassius). Fishing spiders are able to move across the surface of the water without breaking the surface tension, but when waiting for prey they usually anchor themselves using one or more legs to an object that floats or sticks out of the water. 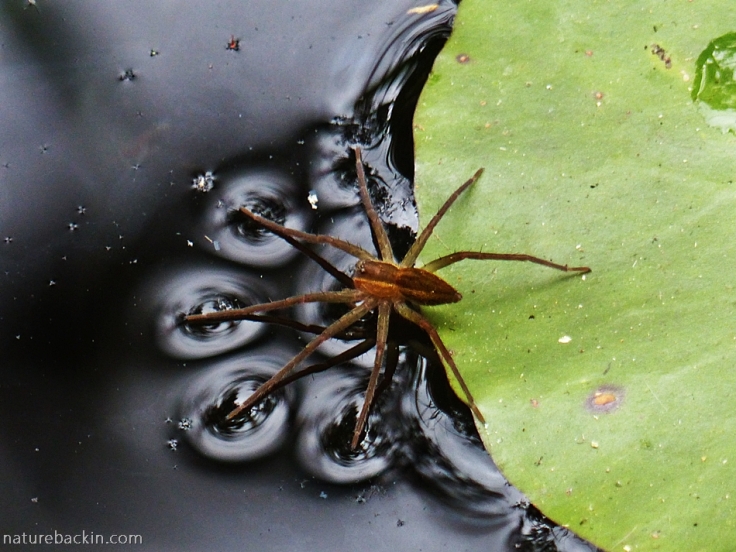 A fishing spider in our garden pond with its hind legs on a lily leaf and its other legs spread on the surface of the water. From here it can catch insects or tadpoles that pass nearby

Fishing spiders spend a lot of time motionless as they wait for prey to approach. If threatened or disturbed, they can submerge by climbing down objects protruding from the water and they can remain underwater for up to 35 minutes.

The spiders in our pond vary quite a bit in colour. I guess there is colour variation within a single species rather than that they are different species present in the pond. In the photo above the spider has its hind legs on a rock and its front legs on the surface of the water. In the bottom left corner of the photo, the shed exoskeleton of a spider can be seen floating in the water

For much of the year there are many tadpoles in the pond. Here they can be seen feeding on algae on the surface of a submerged rock 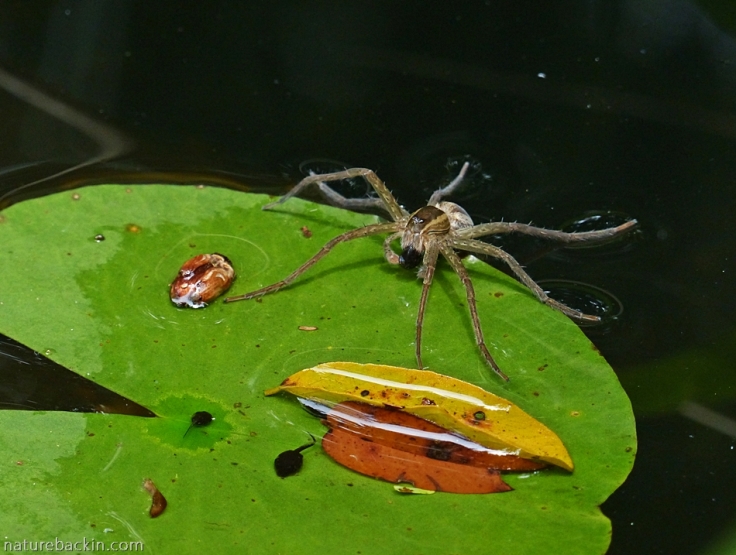 It turned out that I should have been worried. Though still eating, the spider suddenly turned and grabbed the tadpole that had been swimming under its forelegs

The spider uses its pedipalps to hold the prey while eating.  The spider’s eyes, which are in two rows, can be seen in this photo 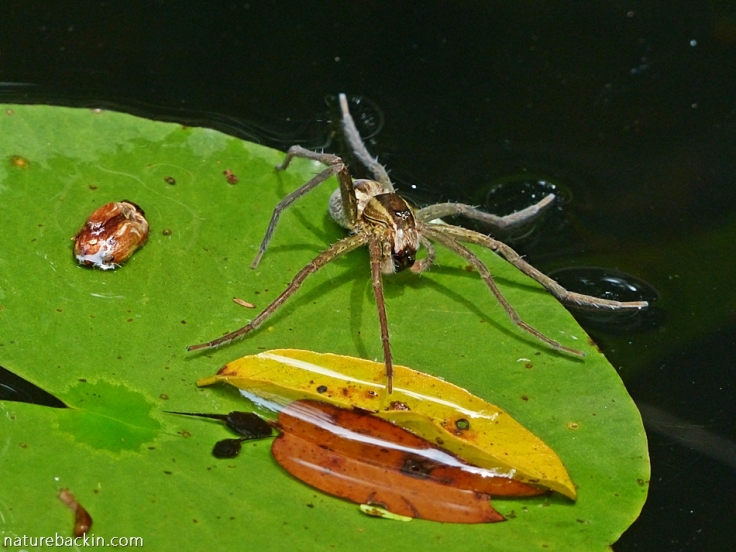 Fishing spiders can catch prey that is large relative to the size of the spider, and in addition to catching tadpoles and insects, some species of fishing spiders may also catch little fish and even small frogs such as reed frogs.

I like to regard the garden pond as a peaceful space, but of course that is an illusion.

P.S. This post is scheduled to publish while I am away on holiday mostly with no Internet connectivity. I will catch up next week when I am back.

25 thoughts on “Fishing spider catching tadpoles in the garden pond”