Mistbelt Forest in close up 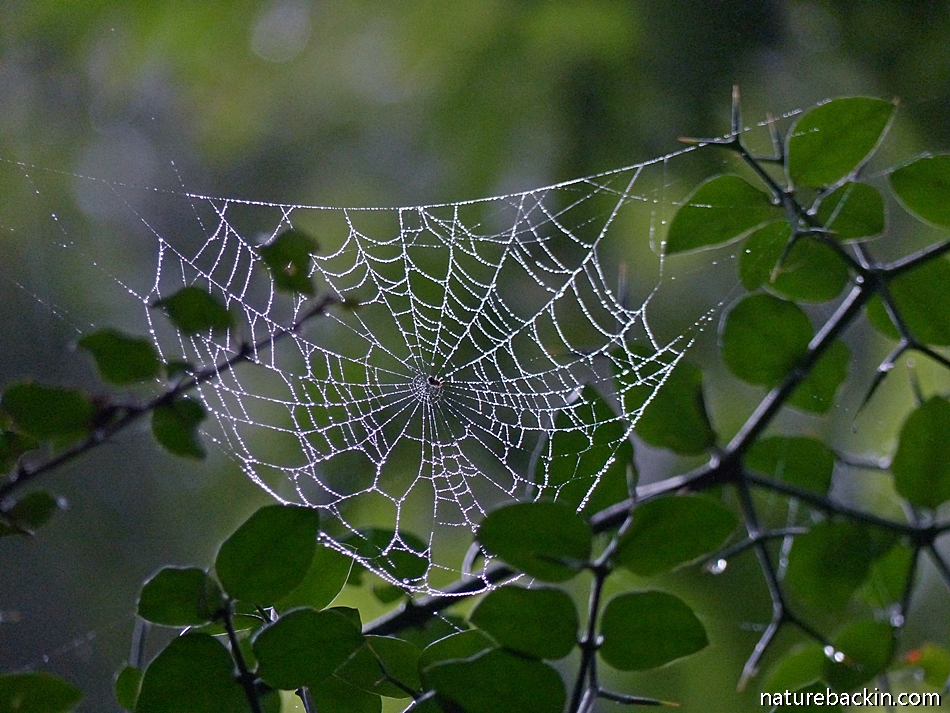 Moving in after last week’s broader view of mistbelt forests, here is a more micro perspective with a selection of photos to celebrate forest treasures, and there are fewer words too. (Cue smiley face here.) 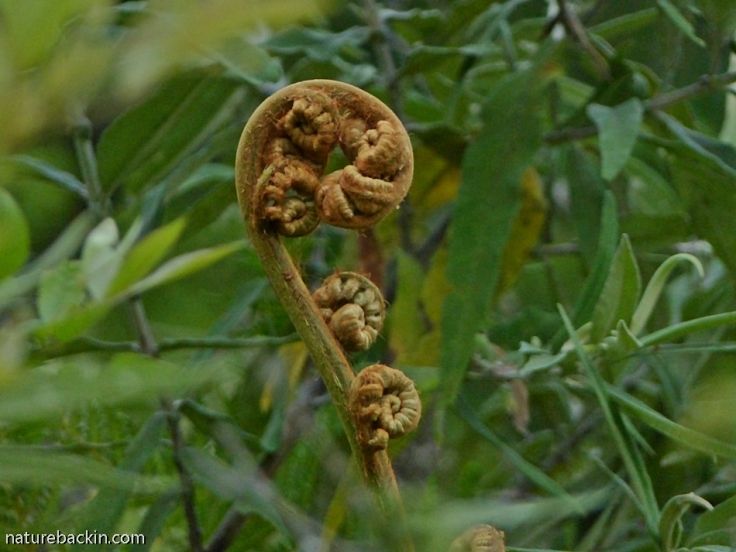 The tightly furled new leaves of the Bracken Fern (Pteridium aquilinum) are known as fiddleheads. Looking at this photograph it suddenly dawned on me as to why – they resemble the scroll or the curly end of a violin. The other name for the curled top of new fern fronds is crozier, named for the stylised curled top of a bishop’s staff.

Seen on yet another misty Midlands morning, the dainty flowers of the climbing lily Gloriosa modesta (formerly Littonia modesta), which grows on the forest margins 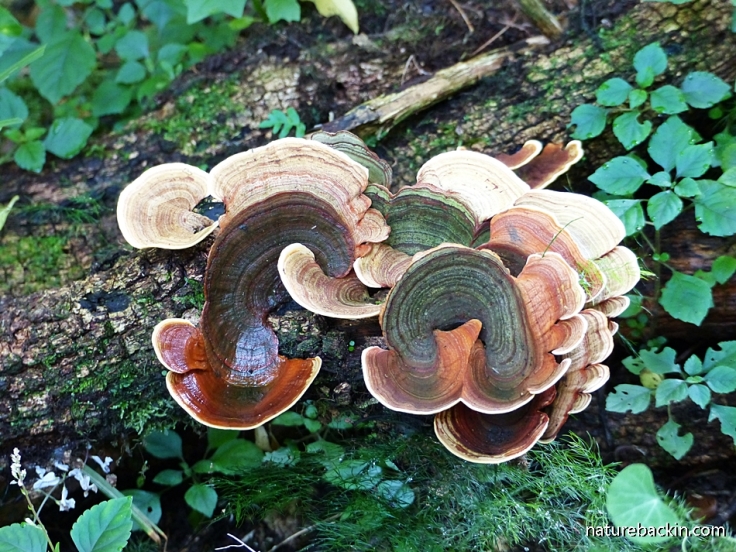 Bract fungi growing on a fallen tree that is decomposing on the forest floor.

A hint of the massive rooting system anchoring a tall tree of the forest. 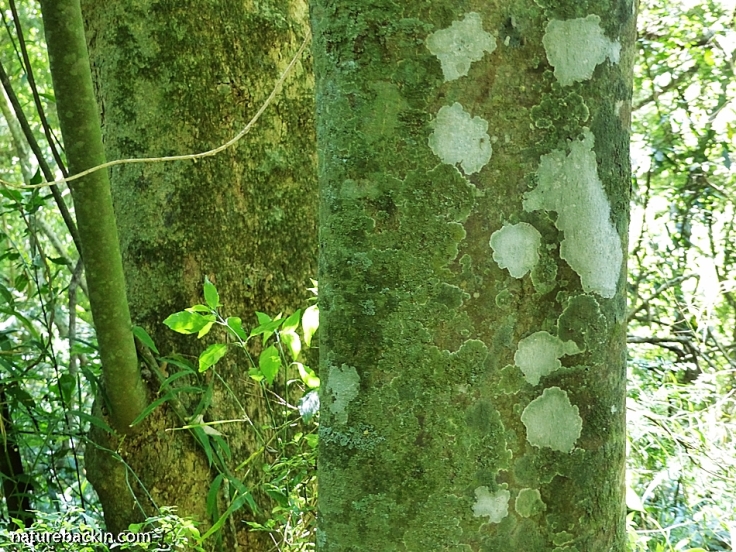 The bark of the forest trees is surprisingly various and beautiful, often patterned by lichens. I venture to guess that the tree in the foreground is a White Stinkwood (Celtis Africana), but would be grateful if anyone knows for sure.

The bark and foliage of the coniferous Real Yellowwood (Podocarpus latifolius). These slow-growing trees can grow up to 30 m in height. They were heavily logged during the colonial era with the wood being used for buildings and furniture. There are three species of Yellowwood in South African forests. Their complex fruiting structures provide food for a variety of animals and birds, including the Cape Parrot. For an interesting article on planting indigenous trees to help rescue the endangered Cape Parrot, which is reliant on indigenous forests and on Yellowwoods in particular for its survival, see here.

The trunk of the Forest Knobwood, showing its strange knoblike thorns. This tree in the Balgown Conservancy bears a label identifying it as a Zanthoxylum Davyi. Traditionally, twigs of Zanthoxylum species are debarked and beaten flat to make toothbrushes. Additionally, the bark and powdered root are used as a mouthwash and to treat toothache. The plants contain an alkaloid that has been shown to have anti-plaque and anti-inflammatory properties and it is used commercially in toothpastes and oral rinses  (Source: Ben-Erik van Wyk and Nigel Gericke. 2007. People’s Plants: A Guide to Useful Plants of Southern Africa.  Pretoria: Briza.) 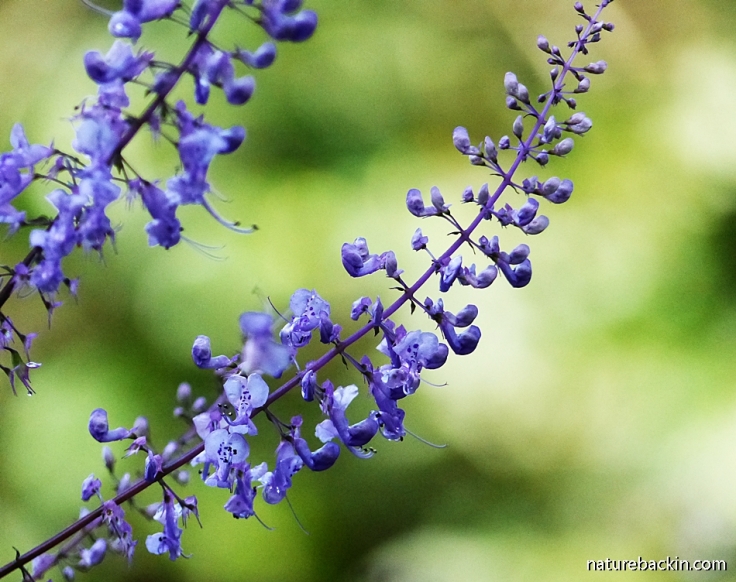 A tall species of Plectranthus flowers particularly well where sunlight filters through the trees. I think this is the Forest Spurflower (Plectranthus fruticosus).

The pink flowers of the Cape Chestnut (Calodendrum capense). Nearby to these trees is a less common variant with white flowers.

A misty view of Cape Chestnut trees flowering in midsummer.

Lichens resembling decorations on trees growing towards the outer edges of a large patch of mistbelt forest.

A wild Streptocarpus growing on the edge of a natural forest clearing. Many varieties of Streptocarpus are grown internationally as ornamental houseplants. 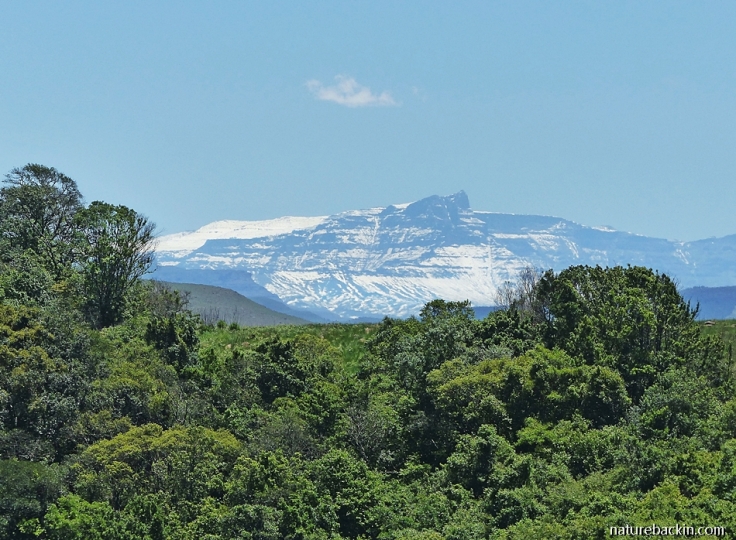 A general view of mistbelt forest in the KwaZulu-Natal Midlands with grassland beyond, presided over by the Drakensberg Mountains after an unseasonal early-summer snowfall. The peak of Giant’s Castle is visible.

Emblematic of the forest, is the colourful yet elusive (and hard to photograph) Narina Trogon

20 thoughts on “Mistbelt Forest in close up”