Flowering in our mini-grassland this summer are the crimson Inanda Lily and the more understated, though intriguing plant known as the Pineapple Lily.

The Inanda Lily occurs naturally from South Sudan to Tanzania in eastern Africa, and in southern Africa it is known as the Inanda Lily in KwaZulu-Natal (as it is associatied with the Inanda Valley), and in the Eastern Cape as the Kei Lily. Its botanical name is Cyrtanthus sanguineus – with sanguineus meaning blood red.

In the wild it grows in crevices and on ledges on rock faces, usually near water and mostly but not exclusively along the coastal belt. One of the best ways to see it in the wild is by abseiling down cliffs! Because it mostly occurs in fairly inaccessible places it is not threatened in the wild.

We do not have any cliff faces in our garden. The plants now established here came from a small number of bulbs from a friend’s potted specimens. 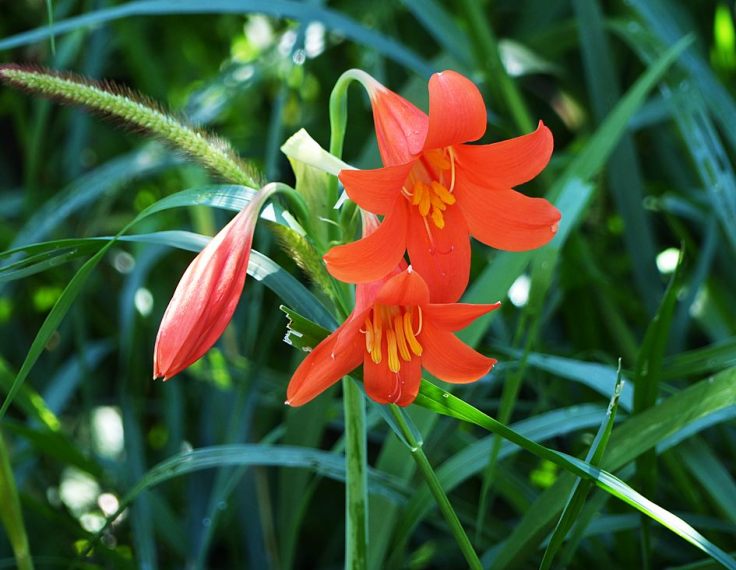 The narrow strappy leaves of the Inanda Lily are not conspicuous, but it makes up for it with its very showy flowers in the summer. It is member of the Amaryllidaceae family.

This season we found – only when it flowered – that a plant had seeded itself in our mini-grassland. It must have dispersed from the distant clump elsewhere in the garden. This lily has been grown in cultivation since 1846 and is fairly easy to propagate from seed. New plants can flower from their third year onwards. It can also be propagated by bulb offsets, but parent plants should not be disturbed too often.  It does well in shallow pots and does not mind being root bound. It should not be kept too wet else its bulbs may rot.

In addition to its pleasing appearance, the Inanda Lily is used in traditional medicine. Infusions can be taken regularly by pregnant women to ensure easy childbirth.

The Pineapple Lily also has medicinal uses. Bulbs are harvested in the wild for the medicinal plant trade. It is so popular that the population in the wild is becoming increasingly scarce.

A Pineapple Lily in our garden, with the flowers still in bud. The inflorescence is topped by a crown of bracts so that the plant resembles a pineapple. The botanical name is Eucomis autumnalis. The name derives from the Greek eukomes, which means “beautifully haired”.

The South African National Biodiversity Institute (SANBI) notes on its website, see here, that the Eucomis autumnalis (and some subspecies), has been classed as ‘declining’ – that is “a species that was recently widespread but was likely to become vulnerable and continue to decline if destruction of the wild populations continued”. Increasingly, harvesters working for the medicinal trade have to travel to more remote areas to find this plant, and bulbs are not always available for sale, and those that are available are generally smaller – another indication of scarcity.

The Royal Botanical Gardens Kew website, see here, notes that Eucomis autumnalis is toxic if ingested, and reports that scientific research has shown Eucomis species bulb and root extracts to have anti-inflammatory properties. According to People’s Plants, decoctions of the bulb of Eucomis autumnalis are used as enemas for backache, to assist in post-operative recovery, and to help in healing fractures. It is also used as an emetic in the treatment of fever, hangover and syphilis. Pooley relates that it is also used to treat urinary and pulmonary ailments, fever and diseases of stock. 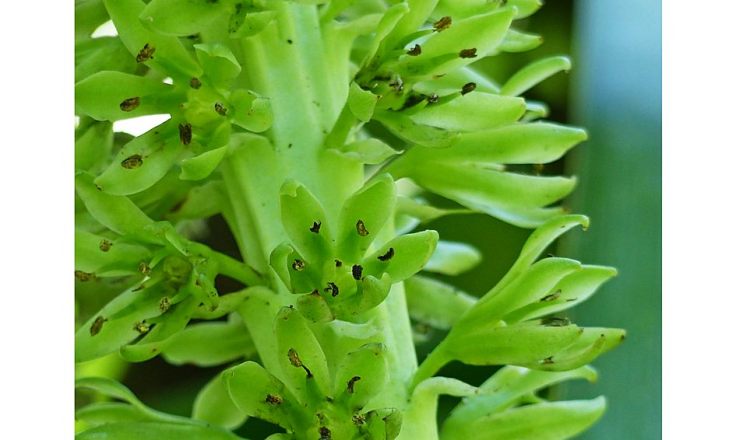 It can be grown from seed, but it will take a few seasons until new plants flower. Offsets may also be divided from the parent plant in autumn. The plant grows in grasslands in the wild but is absent in drier regions. It is found in most southern African countries and in Zimbabwe and Malawi. It is a popular garden plant and it is available from nurseries. In fact several species of Pineapple Lily are popular internationally and new varieties are now cultivated worldwide. It was almost three centuries ago that the first Eucomis was cultivated in Britain.